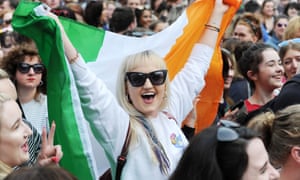 Not surprisingly, the Irish have voted to join the league of nations in treading under the lives of those unborn for the sake of so-called freedom.  In this vote, the Irish have become one of the last of the nations to repudiate their Christian heritage and their Roman Catholic identity and it has taken only about 35 years to do it.  With roughly the same number voting voting to repeal the 1983 Amendment to the Constitution recognizing equal rights to the unborn as passed the Eighth Amendment, two thirds of the population voted to allow abortion in the first twelve weeks of the pregnancy.

Even worse than the vote was the joyful glee of those who returned just to vote for repeal and the uninhibited excitement of those who voted to allow the killing of the unborn.  This is the saddest commentary on the whole cause.  How is it that something regrettably legal and hopefully rare has become a cause for which people are actually partying in the street?  Death is no cause for joy and death is what this vote means.  So that is the state of affairs in the so-called civilized world.  It is not only the religious who cringe but all those who believe that life is precious and deserves the most profound protections.  But for a nation as solidly identified with the Roman Catholic faith as Ireland, it is one more sign of the precipitous decline of religion and morality in one more European country and the barbarism that is the soft underbelly of secular humanism.

Kyrie Eleison.
Posted by Pastor Peters at 6:00 AM

A sad and shamefull day for Ireland.

The fairies and the leprechauns have left Ireland along with Christianity. All that is left is a secular mess rapidly being overwhelmed by izlam.

"During this year's Aspen Ideas Festival, Facebook CEO Mark Zuckerberg... cited, in 2018, American pro-life groups wanted to run advertisements for Facebook users in Ireland. This is because the Irish were about to vote in a referendum on whether abortion should be legalized.

"When Facebook saw the ad requests, the company contacted the Irish government asking whether this should or should not be allowed. "Their response at the time was, 'we don't currently have a law, so you need to make whatever decision you want to make.'"

"In other words, Facebook could do as it pleased. There was no legal reason to disallow the ads. But what did Facebook do? You guessed it:

"We ended up not allowing the ads."

"This is extremely disturbing, but it's very expected. Facebook's top managers have a long history of leftist activism, and it's clear from the company's policies that they're pushing their authoritarian leftist views on the company itself."