The times in which we live seem to delight in the radical disconnect with the past, a rejection of the hermeneutic of continuity.  It has become fashionable to reject the past in principle, to insist that we have nothing to learn from those who have gone before us, and that the circumstances today require new and different solutions to survive.  This is true even in the Church. 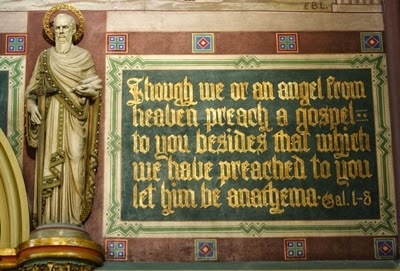 The issues that are controversial today shouldn’t be.  But they are.  It was not all that long ago that nearly every Christian denomination stood firmly on the side of life but there are many of those jurisdictions that have conveniently forgotten what they said and there are many in the pews who find it easy to disagree with their church's stance and still remain in the pews.  It was not all that long ago that you could tell what denomination a church was by seeing what happened on Sunday morning but now Lutherans worship like evangelicals and evangelicals dabble at liturgy and congregations within each jurisdiction have made conflicting choices.  It was not all that long ago that such things as catechisms, confessions, and doctrinal statements were normative for the faith of a church body but now even confessional churches find creative ways to confess differently from their confessions.


The issues that are controversial today shouldn’t be.  But they are.  It is a sign of the times in which we live that the most controversial things in the faith are what the church has believed, taught, and practiced in the past.  For those on the liberal end, these things are archaic or irrelevant so they invent positions on issues from the historicity of Scripture to sex and gender issues that represent a distinct breech from their own theological ancestors.  On the conservative end, these things are controversial because they are convinced that they either don't work anymore or are not relevant to where our people are and so they find ways to invent a theological identity or at least a practical face that is at odds with their theological predecessors.

In other words, the most radical position today seems to be the stance that is consistent with the past.  On everything from birth control to abortion to same sex marriage to cohabitation to the factual basis for Scripture's stories to liturgy to piety -- the most radical position is the one that stands on the same ground as our theological ancestors.  Interesting.  Something to think about, to be sure.  Just maybe we don't have to reject our past in order to guarantee our future.  Just maybe, a faithful continuity with the past just might be the road as yet left untrod and the real path to vitality.  Just thinking and you know how dangerous that can be. . .
Posted by Pastor Peters at 6:00 AM

I think the reason many of us are troubled by the times in which we live is because we refuse to be socially relevant when it means discarding cherished convictions. I would prefer to be unpopular in my own country and follow the Lord instead. It doesn't matter if the world holds us in disdain for being pro-life, against same gender marriage, opposed to progressive liberalism in the church, and so forth. It is better to go to your grave with a clear conscience than with a confused and corrupted set of false values.

1) Luther didn’t write much on worship per se.
2) For Luther, the sermon was the central focus of the service.
3) Luther strongly opposed the sacrificial aspect of the mass.
4) Luther was in favor of keeping as much of the service as possible.
5) Luther did not want to get legalistic about the order of service.
6) Luther encouraged Christian freedom in these matters to be exercised in love.


"The Mass vestments, altars, and lights may be retained till such time as they shall all change of themselves, or it shall please us to change them: though, if any will take a different course in this matter, we shall not interfere. But in the true Mass, among sincere Christians, the altar should not be retained, and the priest should always turn himself towards the people as, without doubt, Christ did at the Last Supper. That, however, must bide its time."

By 1533, however, Luther came to the conclusion that "mass" should no longer be used in reference to the sacrament of the altar.

The word "mass," Luther believed, should be defined as the sacrifice that the priest offers for sin. It should never be used to speak of that sacrament which grants to believers the body and blood of Christ and the forgiveness of sins. He spoke of the time when he himself could not differentiate between the two:

"For me mass and sacrament at the altar were one and the same thing, as they were at that time for all of us. Yet they are not one and the same thing. It is the mass when I sacrifice the sacrament to God for my sins and the sins of others as a work performed by human beings (whether they be evil or godly) . . . it is the sacrament when I receive from the priest the body and blood of our Lord Jesus Christ under the bread and wine." [AE 38:227]

Luther was convinced that the use of the terms "mass" and "sacrament" interchangeably has resulted in great confusion, and that the only way to provide a clear understanding of the nature of the Lord's Supper is to stop calling it the mass. "Indeed, I wish and would very much like to see and hear that the two words 'mass' and 'sacrament' would be understood as being as different as darkness and light, yes, as different as devil and God." [AE38:226] Again Luther prayed,

Lutherans tempted to use "mass" as a synonym for the Lord's Supper should take seriously Luther's observations on the difference between "mass" and "sacrament."

Excerpted from "Luther and the Mass" by Rev. Daniel Preus.

Note what Luther said about the term mass because it was his personal identification of the abuses with the term mass and not the presumption that they were forever in time so yoked. We are 500 years away from Luther and the situation has changed.

Besides, Lutherans are not bound by what Luther said (except in the Confessions) where the term is not quite as tainted. That said, Luther's direction in this area is informative but not prescriptive.

"Mass" is definitely "tainted" by its condemnation in the Smalcald Articles, a Symbol in the Lutheran Confessions. Rev. Preus stated:

"In 1537, when Luther's Smalcald Articles appeared, he continued to view sacrament and mass as inimical to each other. Mass and sacrament are so opposed to each other that Luther dealt with them under two different headings. Furthermore, when speaking of the Lord's Supper in the article on the mass, he used the word 'sacrament'; the word 'mass:' on the other band, means sacrifice (SA ii ii)... It is little wonder then that Luther concluded, 'The Mass is unnecessary and so it can be omitted without danger' (SA ii ii, 3). In fact, he wrote, 'Let the people be told openly that the Mass, as trumpery can be omitted without sin, that no one will be damned for not observing it, and that one can be saved in a better way without the Mass' (SA ii ii, 5; Tappert, 293)....

"Just as Luther believed that the entire gospel is encompassed within the sacrament of the altar, so he viewed the sacrifice of the mass as, 'the basis of all blasphemy in the papacy'... To remove the mass would be to topple antichrist from his throne. Therefore, said Luther, it is not possible for the papists to yield on the article of the mass. 'The papists are well aware that if the mass falls, the papacy will fall with it' (SA ii ii, 10; Tappert, 294)."

And of course, Luther stated in SA.II.II.11: "In addition to all this, this dragon's tail, [I mean] the Mass, has begotten a numerous vermin-brood of manifold idolatries."

Of course it is true that Luther was using the term mass a shorthand for its abuses. That does not require Lutherans to follow that lead. I am not arguing for the requirement of the term but simply that there is nothing that requires it to be synonymous with its abuses.

The writers of the Formula of Concord agreed with this and noted (Ep.VII.23; SD.VII.109): "We likewise reject and condemn all other papistic abuses of this Sacrament, as the abomination of the sacrifice of the mass for the living and dead."