We all knew the times were a changin but it appears that the people are a changin as well.  In an article entitled Where Protestants and Catholics Go When They Leave Their Churches that appeared in Christianity Today, I read where 1 of 6 Christians in the US changed their religious affiliation over the four year period surveyed.  My first question would be whether those changing are the same folks changing several times or different folks.  After that would be the question of whether these folks also changed in the period before or after that four year survey time.  In other words, are the people changing the changing kind of people -- regular church shoppers, for example. 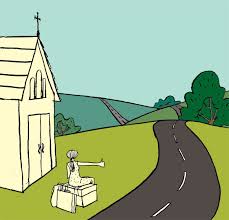 The other big question is where did they go?  The answer is most likely to other churches but which churches benefited from the moves?  Are there patterns that might tell us something about the churches that gain or lost or the people moving around?  The study mentioned surveyed 9,500 individuals, between 2010 and 2014, and find some not so surprising things.  For example, Roman Catholics tend to remain Roman Catholic, change churches half as often as the rest of those who change, and tend not to become Protestant.  Wow.  Who would have seen that coming?!  Protestants tend to change about the same rate as Roman Catholics but remain Protestant.  Wow.  Earth shattering.  When both groups do change, they tend to drop out of church altogether.  About 6.5% or Roman Catholics and 7.4% of Protestants.  Again, not exactly a big surprise.

But within Protestantism there were some changes worth noticing.  About 16% changed from one brand of Protestant to another label.  This would mean 1 of every 4 Protestants made a move in the 4 year period surveyed.  And, again, the chief beneficiaries tend to be non-denominational "churches".   Non-denominational churches, now the second-largest category of all American Protestants, benefited more than any other group.  The categories are:  Baptists are first with 22.9%; non-denominations next at 18.2%; then Methodists, 14.8%; then Lutherans, 11.8%; then all the others.

Here is the most predictable surprise:  non-denominational congregations also show the largest number of defections.  About 24% (1 of ever 4) of non-denominationals changed churches -- double the number of Baptists (12%) and Methodists (12.9%); three times the number of Episcopalians (8.6%) and Lutherans (8.6%). Guess what?  Lutherans had the lowest defection rate of the groups studied.

Of course, this is a survey and therefore it does not necessarily jibe with the actual reports of the church bodies mentioned (some of whom had much larger actual losses than these numbers might indicate).   However, it may be said that the biggest declines from the liberal end of Episcopalians and Lutherans is probably over and so this might have picked up on the end of all that.  I don't know.  What I do know is that catechesis works.  (Or rather, the Word works!)  If we thoroughly catechize our people from a young age, that will have more to do with discouraging defections for any reason than anything else.  Catechesis, catechesis, catechesis.  Those are the key words for today.  Teach them well and they will not depart from the faith.  When will we start acting like we really believe it???

There are good reasons why some believers change churches and denominations. Some folks are in an"exploratory" phase of their Christian walks, and they may be trying to be faithful to God's word but confused about the different doctrines churches teach. So they go shopping for a church home, as I did when changing from Catholic to Lutheran, and trying other denominations in between prior to going to the LCMS.

According to your article, it would make sense that non-Lutheran Protestants easily "change from one brand of Protestant to another label." After all, their roots are in Calvin. Do most people who leave the non-denominational church end up choosing to become "unchurched," or do they find a denomination to join?

As an LCMS Lutheran, I have looked at other denominations and even at the non-denominational church. I feel compelled to stay in the LCMS, as the catechism instruction I had in grade school was too strong and too thorough. The theology of all other Protestant denominations seem too watered down for my taste. If I were disillusioned by the LCMS, I would therefore choose to drop out of church altogether.

Regarding the Lutheran church: The liturgy and the hymns from the hymnal naturally reinforce the theology taught in Luther's Small Catechism. The hymnal is not a dry, boring, repetitive, "old people's songbook", as some would contend. I want to feel like I am praying when I worship.