The Church of the Rainbow Flag. . . 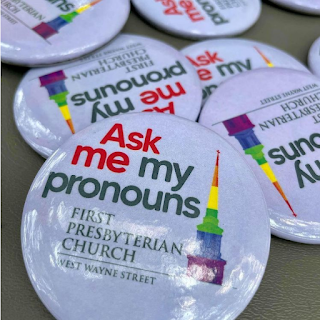 Recently I was sent a social media picture of a church with a rainbow steeple and the words underneath were ask me my pronouns.  I am sure that this congregation was not the first or the only church to pin the rainbow to their identity.  But really?  That is what the Church is know for or as?  The rainbow flag is not the Gospel and it dare not replace the cross as the central sign of Christian identity.  But it has.  At least among some.

The rainbow was once good news.  It signified the mercy of God which was ever before the Lord -- even when our sins confronted Him.  No more judgment with water to kill but the promise of water that gives life.  Noah and his family were saved -- eight souls in all.  And in the holy ark of the Church God still saves.  Not by wishing sin away but by paying its terrible price in suffering and dying on behalf of those dead in trespasses and sin.  But the rainbow is no longer God's sign anymore.  We have co-opted the sign and turned it into an apt symbol of the fall in Eden.  We have substituted our judgment for God's and now we insist that our feelings tell us better the reality of who we are than the God who made us and who redeemed us.  What a farce that rainbow has become!  It no longer offers hope and promise but is an affront not only to the God who made us but to reason and nature and truth.  Would that its arrogance applied only to the area of our sexual choices!  But its damage is more in the realm of distracting and avoiding what is truth and what is love.  Where the cross once spoke with an explanation point of God's relentless work to seek and save us, now the rainbow speaks of our glory in us and our feelings.  Love is no longer strong enough to confront with sin and save with mercy.  Love is reduced to patting on the back our choices and affirming us in our feelings no matter what they are.  Worst of all, Jesus is absent in the very place where He is to be present -- the Church!

Not long ago someone was offended by our preaching and insisted that we preach hate and not love.  Of course, this was in the context of homosexuality and gender identity.  Because we do not affirm either, we must be haters.  Yeah, I get it.  But what offense it caused by faithful preachers seems also to be caused by God Himself.  If the faithful word of the Scriptures is proclaimed and judged hateful by those who prefer their truth to real, objective truth, then the God who spoke that word must also be a hater.  And this is where weak willed churches without a backbone have surrendered the cross to a rainbow.  Rather than risk being labeled a hater or phobic of one sort or another, they surrender the cross and the true Gospel that saves.  Rather than allow God to be judged a hater, they recast God away the clear words of truth to an emoticon of passive acceptance and tolerance of whatever feels good in the moment.

How sad that the best the Church can offer the world is a rainbow steeple or rainbow stole or rainbow flag!  No matter how much we want God to say we are perfectly okay as we are, the conscience still haunts us with a truth that cannot be denied.  And to offer a clear conscience is not to wish sin away or justify our desires but to see in the cross the mercy of God who loves us enough to confront what we would deny.

In the First Things online blog I read:

“Deathwork” is a term used by sociologist Philip Rieff. It refers to the act of using the sacred symbols of a previous era in order to subvert, and then destroy, their original significance and purpose. Rieff uses Andres Serrano’s notorious 1987 picture Piss Christ to illustrate this. The work is a photograph of something considered sacred—in this case a crucifix—submerged in the artist’s own urine. As Rieff puts it, in Serrano's photo the sacramental has been made excremental. Or, to borrow a phrase from Marx— that which was holy has been profaned.

To take God's own sign and turn it into our symbol of something completely foreign to God is to turn this sign of mercy into a deathwork.  It is better to remain silent than to join with the critics of God who, like Eve, knew better what God meant and who, heeding the whisper of the serpent, constantly question and challenge the clear Word of the Lord.  But it seems that too many churches cannot remain silent.  So they offer the world a bastardized symbol without hope or promise in place of one that can deliver on its pledge of grace.  How sad!  How sad also that those who feel such inclinations are willing to be consoled and comforted by words that have no hope or promise!  In the end, we are all poorer because the cross has been judged not enough and the rainbow recycled into Eden's dishonor when it could have been the noble symbol of real hope.

The "church" identified on the buttons is the one in Fort Wayne, IN. They were wallowing in the perversion of "International Pronouns Day" (the 3rd Wednesday of October).

A church that raises the rainbow flag and encourages people to choose their pronouns is denying that God's creation, including male and female, is "good" just the way He created them. It is saying we know better than the One who gave us our being.

You have the right, not just the right, but an obligation to resist the insanity of today. Things like international Pronoun Day are too stupid to talk about even, but it is the sign of the times. Stand for truth, and share the Gospel message. Some will be pulled out of the fire, but many will perish, as the Lord declared.

The demons are not satisfied with taking away symbols only. If we do not protest and resist, if we fail to trust our Lord, they will not just co-opt our faith, but steal our very souls. Offering the rainbow to them will not assuage them; they will not be satisfied till we renounce Jesus, the Christ. Fight on!