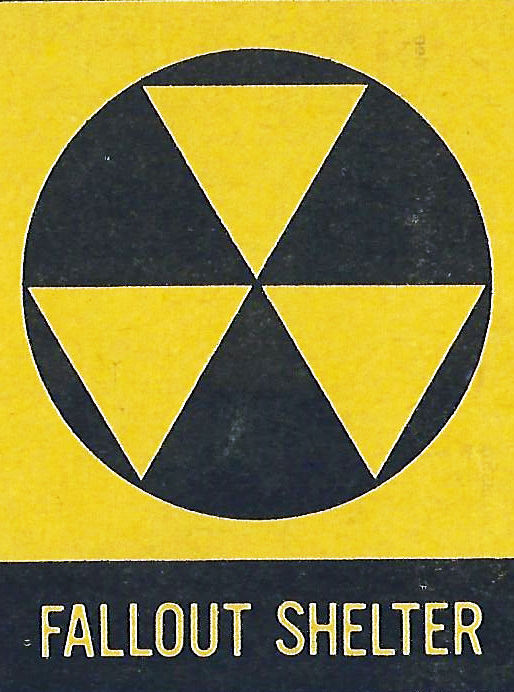 In the age in which I grew up, Civil Defense shelters were all around us, stocked with provisions in case of nuclear disaster or just plain war.  It seemed we had worse winters than have been experienced recently and tornado sirens were not a rarity.  In addition, we had regular tornado and nuclear attack drills -- everything from the orderly movement of students to the basement for natural disaster and under our desks with our heads to the floor in case of man-made disaster.  All of that, to be sure, but I do not recall living in fear.  Our nation was locked in a conflict between Communism and the whole of the free world hung in the balance.  We watched as a President, Civil Rights leader, presidential candidate, and governor were assassinated or shot.  There were the civil rights protests and the riots that ensued in response.  But we did not live with fear and were not consumed with our personal safety.  Was it only the mentality of a small, Midwestern farming village or was life different all across America?

Now we live in a much more polarized time.  The people on the left fear climate change and racism.  The people on the right fear the loss of liberty and their independence.  People across the whole political spectrum fear a pandemic under which we have lived for a year and a half.  People once feared debt but our nation has profoundly increased the national indebtedness to the point where no one can even fathom its size.  In contrast, there was a time in which people feared not getting enough toilet paper or hand sanitizer and were willing to go to great lengths to get them and hoard them.  Fear is all around us and our children are not immune from them.  They spent a school year at home doing their studies online, avoiding friends or the usual activities of youth all because the world was captive to the fear of what was or might be.  We have coined a term for the kind of dramatic fear that grips a person.  PTSD   Is it stress or is it fear or are they both intertwined to become a psychological disorder?

We live in the pandemic of fear -- all kinds of fears but plenty enough to pervade our daily lives.  Trust is the oddity today.  We do not trust and may, indeed, fear our most sacred institutions -- from the halls of Congress and the offices of the President and the Court System to the local politicians, police, and health and safety offices and officers.  Even churches are not free from this suspicion.  We closed them down because we believed that the churches did not know how to handle our best interests and therefore took from them the right to assemble and decided for them when and if it was safe to gather.  The continuing repercussions of the sex and abuse scandals of Rome and the Boy Scouts have taught us all to be wary of those who want to be around children.  We are afraid of what people are putting in our foods and afraid of people in general.  We will work at home, shop at home, worship at home, and play at home because it suits our fears and our penchant for doing things our own way.  It does not matter if you are liberal and progressive or conservative, fear plays into nearly every aspect of our individual lives, our lives together, our politics, our views of the news, and our expectations of life.  Will it ever end?

Worse than all of this is that Christians have been caught up in it all.  The God whose most familiar greeting in all of Scripture "Fear not" seems unable to calm our longings, fears, and anxieties about this life.  We are less convinced as a group that eternal life matters all that much to daily life and so the work of God in Christ is increasingly irrelevant to our lives -- not because it isn't but because we have judged it so.  Could this be the curse of prosperity?  Is the devil making us so comfortable with ourselves and so uncomfortable with the lives around us that God is being squeezed out of our lives?  Have we come to the conclusion that fear is the most important factor in our lives and that instead of overcoming it we exploit it for one reason or another?  Christ did not come to help us manager our fears or exploit them for gain to overcome them.  He has overcome the world.  He has broken the back of fear.  When He says to us, "Be not afraid," our Lord is not being therapeutic or cathartic. He is speaking the most real and profound truth of all.  He holds us in the palm of His hand.  Not even sin and death could escape His power and if He has so invested Himself in our eternal good, as St Paul asks, how can we allow fear to capture our hearts in the face of mortal good.  In this way the good apostle reminds us -- not in resignation but in hope -- whether we live or whether we die, we belong to the Lord.