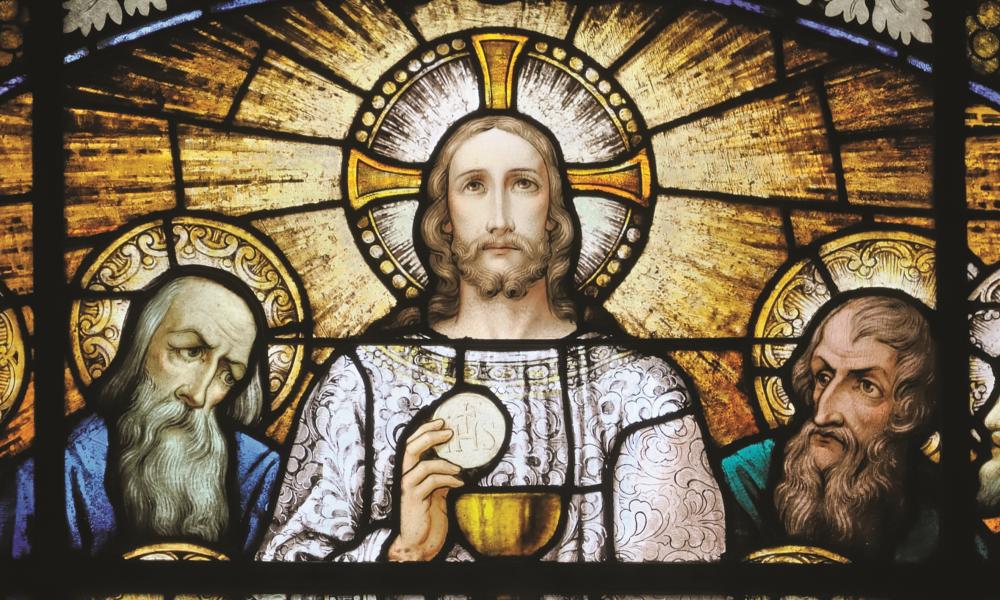 It is a wonderful and blessed thing that the normal four times per year offered in days gone by have given way to at least twice monthly and, for many parishes, a weekly Eucharist.  This is a most salutary return to the expectation of the Augustana.  Whether the Christian communes as often as the Sacrament is offered is a decidedly different question than whether the congregation should offer the Sacrament at least weekly.  But we are making progress on both fronts.  As a child growing up, there were folks who left after the offering even though the Sacrament of the Altar made at best a quarterly appearance in the life of the congregation at worship.  They did not intend to commune.  Either they had not announced, not been at the Friday evening Confessional Service, or did not feel themselves in great need of the feast of Christ's flesh and blood.  There are, I expect, fewer who walk out before the Sacrament today.  Though I would argue that those who walked out needed to witness what was happening even if they chose not to participate in the actual communion.  There is godly catechesis in the rite that is not without beneficial effect to our faith and piety, though, perhaps, not as much as receiving in repentance and faith the body and blood of our Lord.  Yet for all our gains in frequency of offering and receiving the Eucharist, there remains a haunting question.

Do we simply receive the Sacrament more often (not a bad thing and very good indeed) or have we begun to recover the Eucharistic piety that was certainly manifest in the life of our spiritual forebearers but was lost for a significant part of Lutheran history?  In other words, we may offer the Sacrament more often and receive it more frequently but is our piety born from and shaped by this blessed Communion?  Do we long for the holy ground of God's presence where He has promised to come to us in this Sacrament of our Lord's flesh and blood?  Do we glory in the gracious gift of His invitation to come and be seated in the place of honor no sinner deserves and to be served by our Lord the heavenly bread and cup of salvation that are the foretaste of the heavenly and eternal feast?  Does our joy in the Lord come from this most blessed participation in His flesh and blood through which our sins are forgiven and our lives in Christ given comfort, strength, and hope?

My fear is that while our participation in the Sacrament has greatly increased, it remains a mere add-on to other things that we deem at least as important and formative for our lives in Christ.  For example, is the preoccupation with Contemporary Christian Music by so many Lutherans who find it so meaningful and how it speaks to their soul a more profound experience of their life with God than this Holy Communion upon His flesh and blood?  A host of other things might substitute for CCM.  We live in a culture in which the choices are many and the influences come from all quarters and, to be brutally frank about this, Lutheran pastors do not seem to preach and teach the counterbalance of the true spiritual life rooted and planted in the Word and Supper of our Lord.  The internet has certainly given us choice but at what cost?  I heard from my people and from other Lutherans that the preachers who nourished their faith while they were absent from the Lord's House during the pandemic and I shudder to think that they have equated Lutheran preaching, catechesis, and worship with the offerings of the celebrity figures of mega churches or what is heard on BOTT or Moody or other media.  But I fear they like what they hear and find a kindred spirit in these folk who come out of a decidedly non-sacramental tradition.

For what it is worth, I wonder if the same is true of Baptism.  How else can a Lutheran so quickly surrender the grace of baptism in which we are buried with Christ and rise in Him to the new and everlasting life He has prepared?  How can it be that Lutherans so easily content themselves with a symbol when they were baptized in water filled with the Word and the Spirit so that this water can deliver what it signs?  It is a sure sign that our lives of faith do not flow from the font and do not lead us to the altar or we would find a profound rupture between Lutheranism and evangelicalism and Protestantism.

My point is this.  The Lutheran pastor needs to ask himself some distinct questions.  Does my preaching presume and depend upon the resurrection of our Lord Jesus or could I preach the same thing had Christ not been raised?  Do I preach every Sunday the faith within the context of how the people received it in the waters of baptism, through the efficacious voice of the Word, by the absolution that delivers a clear conscience to the penitent, and met in the blessed and hallowed ground of God's presence at the table of the Lord where Christ feeds me His flesh and gives me His blood to drink?  Does my teaching point the people from the font to the altar by means of the pulpit or are the means of grace less prominent in my teaching than content, constructs, and individual doctrines?

As we look around us, it is clear that Rome is not our main problem.  Our people are not tuning into Gregorian Chant or listening to EWTN or sneaking into Mass on Saturday afternoons to see what it is like but they are listening to the contemporary Christian soundtrack, popular evangelical and fundamentalist preachers, and longing for a more immanent style of worship than transcendent.  This is where Lutheranism is bleeding off people.  Could it be that they do not see a difference?  If they don't, how did we Lutheran pastors fail them in our preaching and teaching?

I have coincidentally been thinking these same questions myself. Is our sacramental catechesis at the root of Lutheran decline in America? Why did the earliest Swedish Lutheran settlers in Delaware simply learn English and merge into the Episcopal church within a generation? Assimilation is a powerful force mandated by a need for survival. The desire for contemporary worship is in many ways no different. Yet if you ask the average Lutheran what makes Lutherans different from other Protestants, they will invariably say, “Lutherans believe in the real presence.” That so many find this distinction easy to give up or simply carry over as a personal belief into another denomination is cause for reflection. We rightly emphasize the forgiveness of sins in the sacrament. Yet most Lutherans recognize the forgiveness of sins also throughout the rest of the Divine Service, indeed whenever we ask our Father in repentance and prayer. So there is more that we must teach here. And that is the “do this in remembrance of me,” that is, the gospel proclamation of the forgiveness of sins through Christ once for all that he personally guarantees and seals for us individually by giving us his body and blood here and now. And that this treasure is a gift for the strengthening of our faith that can never be “used” enough, just as we cannot hear the gospel enough, or be strengthened by recalling our adoption through baptism enough.