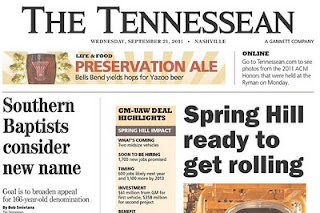 Big news out of Nashville -- the Southern Baptists are considering a name change.  Yup.  It's the truth.  They have a study group working on it and everything.

Since we have determined that Missouri is synonymous with conservative, perhaps they will choose to be known as The Baptist Church - Missouri Synod.  But of course, that might mean some in Missouri might want to re-target their marketing since that niche will be filled with the Wal-Mart of Christian churches.  Perhaps, instead of a new name, they could have a couple of wholly owned subsidiaries aimed at different markets with a more upscale branding to attract those not interested in the Wal-Baptist Church.

And I quote the story:

From The Tennessean story:
— Baptist or not?: In a post-denominational age, do the Southern Baptists want to drop just “Southern,” or will they consider chopping the “Baptist” too?
— By the numbers: The Southern Baptist spin is that a name change may be needed because the denomination has a national and international reach. But what number of Southern Baptists really reside outside the South? It would be interesting to see a specific chart of membership by state and country. (GetReligion readers may remember the media confusion created last year by Southern Baptists from Idaho who got in trouble for trying to take orphans out of earthquake-ravaged Haiti.)
— Marketing: What are the pros and cons of a name change? The costs? The legal ramifications?

I am sure it won't be long before the Dollar General of Christian churches (well, mighty Missouri, of course) decides that maybe it should rebrand... or not.  All I can say is I don't know how I will sleep tonight!
Posted by Pastor Peters at 6:00 AM

Former Baptists are groaning. It was inevitable. The great fear for the recovering Baptist (now LCMS) is that they have jumped out of the wagon and landed right in brown stinky stuff.

Not all of us are blessed with a confessional Parish. Some drive long distances to attend one.

Most of us went through perdition to get to the Truth, Law & Gospel (instead of Law, Gospel, Law), and Missouri. Heaven help us.

the scary concept might come from the politically correct left who might require the new name to have no inclinations of spirituality. Would "The Dunkin Do Nots" be acceptable to the liberals who are offended by the Southern reference?