The Liturgy -- optional or essential? 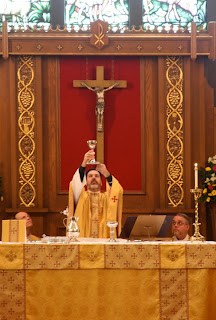 Friedrich Kalb, in his work Theology of Worship in 17th Century Lutheranism, makes it clear that with the divinely mandated Word and Sacraments come the forms in which the means of grace do their work.  "Liturgy is inherent in the commission to proclaim the Word of God and dispense the sacraments." (p. 74)  At the very same time, there exists a tension between the legislation of every word or action and the fluid nature of the form's own history and development.  "Although the basic content and basic form of proper external divine service are clearly indicated in God's revelation, it does not follow that every question which occurs to us when shaping our service must receive a direct divine reply." (p. 104).

The Apology to the Augsburg Confession reminds us that the the chief worship of God is the preaching of the Gospel (XV 42) and yet this preaching is not primarily nor exclusively evangelistic but the preaching of the Word of God that takes place within the assembly of the baptized (the Church).  Inherent in this term "preaching" is the Divine Service -- the preaching from which the Church's witness and proclamation to those not yet within the household of God flows.

In the same way, baptism, the Lord's Supper, and absolution -- rites with the command of God and the promise of Christ attached to them -- do not take place in the abstract but within the Church and specifically within the framework of the liturgy.  Indeed the proclamation of the Word and the administration of the Eucharist are the liturgy.

Kurt Marquart suggested that on the one hand actual worship is neither adiaphora -- nor any part of it --  yet this worship is not possible without the particulars of time, place, and manner -- in other words, adiaphora!  Even if we call them adiaphora, it does not follow that they do not matter.  Lutherans have become far too comfortable in their Reformed/pietistic environment to jump to the false conclusion that Article X (FC) consigns everything liturgical to the realm of adiaphora so that as long as Word and Sacraments "come to expression, somehow, all outward arrangements are free and 'indifferent.'"  (Marquart, A Contemporary Look at the Formula of Concord p. 263-4)

This business of adiaphora has led to many Lutherans insisting that so long as sermons are preached and water, bread and wine are present with the minimum numbers of (consecratory) words, nothing else really matters.  In truth, however, the liturgy is not indifferent but reflects and proclaims doctrine and truth.  The whole basis of Luther's liturgical reform was that the doctrine in the canon of the mass had to be rejected as being contrary to the Gospel -- it mattered and was not a thing indifferent.

Luther's practice is instructive.  He did not begin with nothing to construct a new liturgy but reworked the historic mass in a manner both consistent with the doctrine of justification and faithful to the form which he had received, minus the accretions of a later time and age which had distorted both its purpose and intent.  Ceremonies are important both for the fact that they witness to the catholicity of Lutheranism and its confession as well as because they edify the people of God.  The Lutheran Reformation, despite what some Lutherans think and what those outside Lutheranism have claimed, is NOT a sectarian spirit.

Consider this:  For although the holy Fathers themselves had both rites and traditions, yet they did not hold that these matters are useful or necessary for justification; they did not obscure the glory and office of Christ, but taught that we are justified by faith for Christ's sake, and not for the sake of these human services. But they observed human rites for the sake of bodily advantage, that the people might know at what time they should assemble; that, for the sake of example all things in the churches might be done in order and becomingly; lastly, that the common people might receive a sort of training. For the distinctions of times and the variety of rites are of service in admonishing the common people. 21] The Fathers had these reasons for maintaining the rites, and for these reasons we also judge it to he right that traditions [good customs] be maintained. And we are greatly surprised that the adversaries [contrary to the entire Scriptures of the Apostles, contrary to the Old and New Testaments] contend for another design of traditions, namely, that they may merit the remission of sins, grace, or justification. What else is this than to honor God with gold and silver and precious stones [as Daniel says], i.e., to hold that God becomes reconciled by a variety in clothing, ornaments, and by similar rites [many kinds of church decorations, banners, tapers], as are infinite in human traditions? Apology XV 20-21


But we cheerfully maintain the old traditions [as, the three high festivals, the observance of Sunday, and the like] made in the Church for the sake of usefulness and tranquillity; and we interpret them in a more moderate way... And our enemies falsely accuse us of abolishing good ordinances and church-discipline. For we can truly declare that the public form of the churches is more becoming with us than with the adversaries (that the true worship of God is observed in our churches in a more Christian, honorable way]. And if any one will consider it aright, we conform to the canons more truly than do the adversaries....Now, if this worship is omitted, how can there be knowledge of God, the doctrine of Christ, or the Gospel?] But the chief service of God is to teach the Gospel....From this condition of the churches it may be judged that we diligently maintain church discipline and godly ceremonies and good church-customs.  Apology XV 40-44


Luther stated it clearly:  For one should not overthrow or change what cannot be overthrown or changed on the basis of clear Scripture. God is wonderful in His works. What He does not want, this He points our exhaustively in Scripture.  What He does not point out there, this one should let stand as His work.  We are excused.  He will not mislead us. (WA 26, 167)  Luther from this very quote shows that the Reformers did not believe that the mass itself (the liturgy) was contrary to Scripture except in the abuses (the sacrifice of the mass) and that these were weeded out on the basis of Scripture to preserve the form pure and faithful, for confident use within the Church.  Furthermore, Luther's liturgical principle was to follow the explicit Scripture in changing what must be changed for pure doctrine and true catholicity and not on any other basis.  Finally, it is not the individual congregation nor the Pastor who is allowed to wield great freedom in matters liturgical but the decision of the CHURCH.  It is a whole other area of confusion that we have assumed that the CHURCH here means each individual gemeinde or congregation.  Here the sixteenth century Reformation church orders and their successors show that the Church is not understood in the sense of an individual congregation but on the basis of region or jurisdiction.  Certainly it must be said that personal taste has never been an authentic criteria for Lutheran determination of which ceremonies to keep or what must be reformed for the sake of the Gospel.  Period.

Posted by Pastor Peters at 6:02 AM

Yeah, well, here's some more stuff for which there is no call in either the words of the Confessions or the example of the Reformers.

We retain the ceremonies previously in use for the most part, except we note all these rites here and there over time so we're gonna come up with several pastiches from them so they'll all be right here in one place at one time in one book. Take your pick.