Singing Praise.... The proud past and bright future of Lutheran Music... 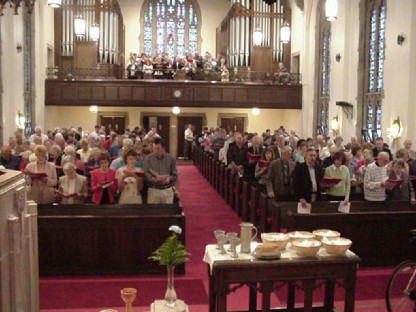 Singing Praise -- The proud past and bright future of Lutheran music.  By Mollie Ziegler Hemingway (first printed in Thrivent magazine but worth repeating here...)

"Next to the word of God," Martin Luther wrote, "music deserves the highest praise." It's no surprise, then, that Lutherans always have been known as "the singing church."

Of course, many church bodies love to sing. So what sets Lutherans apart?

The Lutheran church's musical strength is in choral music. It began with the Lutheran Reformation, which emphasized the congregation as the place where faith is lived, and hymns are the means by which key doctrines are carried to the members. In fact, some of the Lutheran church's great theologians, such as Paul Gerhardt, were hymn writers. And some of history's greatest music talents, including Johann Sebastian Bach, were Lutheran church musicians who produced music for worship.

The choral tradition continues today. While Sunday services and styles differ, a typical Lutheran service begins with a hymn of invocation – a song of praise, prayer or reflection on the season of the church year. The hymn of the day builds upon the chosen Bible readings and sets the stage for the sermon. Most congregations sing additional hymns during Communion, and a final one at the end of the service that reminds them of what they learned. And that doesn't count the prayers and other parts of the liturgy that can be sung – or the four-part harmonizing that's been known to break out at church potlucks.

"Good Lutheran tunes are challenging and athletic," says Lutheran pastor and poet Stephen Starke, who's written more than 160 hymn texts. "They have a lot of life to them." This Thrivent member's work – which has appeared in hymnals, been used in choral settings and been featured on a national hymn festival CD – is just one example of how Lutheran hymn writing is thriving.

Of course, the challenge of the music is part of what makes it so fun to sing, particularly in four-part harmony. "The development of a distinct choral tradition from within our Lutheran colleges in the early 20th century created a style that complements the importance of congregational singing within the Lutheran church," says Beth Burns, executive director of the Lutheran Music Program (see "Tomorrow's Musicians").

A strong rhythm provides Lutheran hymns with vigor and determination that supports the church's theology, says the Rev. Dr. Daniel Reuning, a Thrivent member and the artistic director of the Bach Collegium, an ecumenical choral-instrumental ensemble in Fort Wayne, Indiana.

Theological intensity is important for Lutherans to understand since our hymns deal with the reality of sin, suffering, the devil, the world and our flesh pretty seriously," he says. Consider Martin Luther's classic "A Mighty Fortress Is Our God." In four short verses, it references the power and majesty of God, our focus on Christ, mankind's inability to provide for salvation, the reality of evil, and references to each member of the Trinity.

What's more, that hymn has been translated into dozens of other languages, including Nuer. That's the language Sudanese Lutheran immigrants in the Twin Cities use to sing the hymn, accompanied by large drums familiar to their home culture. And a new French hymnal put out earlier this year by Lutheran Church-Canada is being used by French-speaking congregations in Quebec, the Caribbean and countries in West Africa. In fact, one of the included hymns was originally written in Swahili: "Mfurahini, Haleluya," written by Bernard Kyamanywa while he was studying at a Lutheran seminary in Tanzania. In English, the Easter hymn is called "Christ Has Arisen, Alleluia." It is noteworthy for the straightforward manner in which it tells of Jesus' resurrection and a refrain that is pure Gospel: "Let us sing praise to Him with endless joy/Death's fearful sting He has come to destroy/Our sin forgiving, alleluia!/Jesus is living, alleluia!"

"Greet the Rising Sun," a morning prayer hymn by Zhao Zichen, uses the Chinese folk tune "Le P'ing" to simply express lofty thoughts: "Father, hear my prayer/Keep me safe today/Sanctify my thoughts/All I do and say/As I teach the young/And esteem the old/May your bounteous grace/By my life be told."

And Doreen Potter's Jamaican calypso melody is used to great effect in "All You Works of God, Bless the Lord," which tells the apocryphal "Song of the Three Young Men." Students at St. John's Lutheran School in Orange, California, love to perform the song with an organ, two trumpets, an African drum and a shaker.

These hymns – and the music and instruments that go with them – show that Lutheran music in all its variations continues to have the strong confession of faith, universal feel and timeless sense that have been hallmarks of Lutheran music since Reformation times.

It is unfortunate, however, that the Lutheran hymns written together are bereft of any musical worth or quality. The golden age was and is the Baroque.

While the Baroque era does have the lion's share of good tunes, there are some decent tunes from the present. Stephen R. Johnson's REALITER (from "These Things Did Thomas Count as Real") comes to mind. I'm sure I'll think of more after my morning fog dissipates. :)