Dethroning Bud... or the German Contribution to American Culture 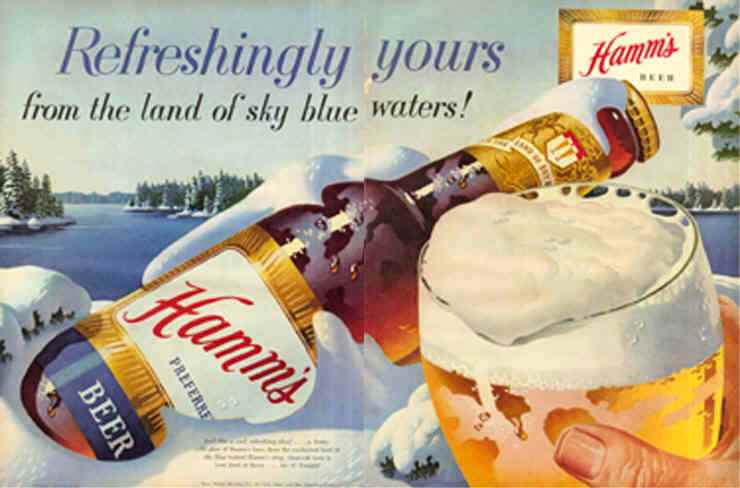 This just in:  After years of gaining ground, The Silver Bullet has finally caught the King.  Coors Light outsold Budweiser last year to become the nation's second most popular brew after Bud Light, according to estimates by an industry trade publication.  Ah, but this is just one more chapter in the long and sad story of Germans (Lutherans) and their quest to make a place, a home, within American culture and life...

When I grew up their were no multinational giants brewing beer.  The beers in our household were regional.  Hamms (from the land of sky blue waters) or Schlitz (the beer that made Milwaukee famous) or Storz (local, Omaha, and light, dry, smooth) or Blatz or Falstaff or Carling or Schaefer, and so on.  Most of these were started by sturdy German stock.  They were entrepreneurs and savvy marketers who saw an opening and transformed American culture and life with their creations of malt, hops, and yeast.  As they moved up the economic ladder the owners and their workers moved from the apartments, tenements, and crowded neighborhoods to the suburbs and their identity diluted as they became more and more Americanized.

So it was for Lutheran denominations.  They were stronger and more unified when they lived in closer proximity and more regional than national.  As they moved out and merged, their identities were watered down and their unity tested by unintended diversity.  As we sought to appeal to a broader taste, we found it hard to maintain the particular marks of our Lutheran-ness as well as our ethnic and cultural heritage.  Much of what was Lutheranisms unity and identity now remains more the proverbial joke of lutefisk and Lake Wobegon than the reality of a people truly marked by a common confession and liturgical culture.  Lars, Lena, Ole, Fritz and Lieselotte have become Jaden, Jackson, Madison, Caden, and Mikayla.  Our people are much more in tune with what is happening now than their ethnic or cultural heritage.  Distanced from family and the familial home places of generations past, they have a new found freedom to seek out and define their Lutheranism on their own terms.

In 1852 George Schneider began what became Anheuser-Busch.  Coops of smaller brewers turned into big multinational companies whose headquarters are no longer American addresses (South Africa, Belgium, etc.).  I well recall my first picnic on the lawn of the then brand new International Center of the LCMS and the giant tap on a sixteen wheeler to accompany the grill fare with appropriate beverage.  The giant brewer of St. Louis had historic ties to the LCMS.

The way of the breweries has become the way of Lutherans in America.  With each succeeding merger, Lutheran identity was diluted and the brew became more and more palatable to the generic taste of the American landscape.  Missouri has no history of merger but as it expanded, grew, and attempted to exert its presence beyond the natural shape of its initial incarnation, it, too, has found it hard to retain the same consistency and identity -- the conflict over the recipe came to a head in the 1960s and 1970s and was resolved by a new brand (AELC).

Beers became less unique and more ordinary over time until the multinationals found that the only real way to expand market share was to come up with low cal versions of their premium brews.  Now we find ourselves in the strange position of having new micro-brews begin to flex their wings and infuse the beer industry with some new interest and taste (much more like the original versions).  Even the biggies in the market have their own small labels to try and keep up with the trend.  Funny thing, though, when I go into Kroger to purchase a six pack, I no longer pay much attention to those within the big families and have learned all sorts of new names (Yazoo Dos Perros, Yuengling Black and Tan, Fat Tire, among them).

Lutheranism is also going the way of the brews.  The big national brands have stumbled and lost market share while we have a sea of new names and acronyms entering the religious marketplace.  The smaller brands tend to be more consistent and cohesive, have a stronger identity and Lutheran palate, and more interest (as well as being more interesting).  Even within the big names, smaller caucuses have been born that define themselves even within the major label (church growth, confessional, liturgical, etc.).  Makes me think that you need to watch the beer taste to predict how things will go in Lutheranism.  Even if looking at the ups and downs of the beer barons and wannabes does not predict Lutheranism's future all that accurately, it gives us an appropriate beverage to soften the blow of our failure.  And that ain't a bad thing!
Posted by Pastor Peters at 6:00 AM

Go for the gusto!

I think the analogy is weak like all the big name breweries lowest common denominator brew. I prefer my brew dark, a bit mysterious, and with substance... Just as I prefer my Lutheranism. It has to be intensely local, for the living out of Lutheranism Is always local tied to altar and pulpit. Hey, even Luther himself prefered a microbrew, his own Katie's label to be specific.

While in Lutherstadt Wittenberg this summer we were told that Martin actually preferred wine to beer. Go figure.

What?? All this talk about beer, and no mentions of G.B., God's Beer, known among men as Grain Belt!

Unglaublich, and I'm not even German, I just play one in LCMS, and grew up in "Lake Wobegon".

What about Sierra Nevada beer, a good California brew? Lots of Lutherans sip it.