Bill Clinton -- Dad of the Year 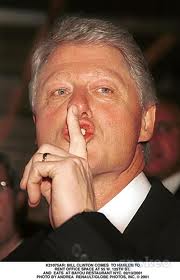 Once again I was beat out -- although I never saw this one coming.  It seems Mr. Clinton's redemption is complete and now all his sins are forgotten.  The guy who arrogantly pointed into the air while insisting, "I never had sexual relations with that woman" has been proclaimed Father of the Year.  The National Father's Day Council, which has been giving out such an honor for 72 years, has named Clinton one of its recipients for 2013.  "With the profound generosity, leadership and tireless dedication to both his public office and many philanthropic organizations, President Clinton exemplifies the attributes that we celebrate through the Father of the Year award," said Dan Orwig, chairman of the National Father's Day Committee.

I guess it is not enough to raise a child or two.  Unless you can be a dad to all, you are not much of a father.  Oh, I surely did not expect the honor for me but it would have been nice if some ordinary father who has done extraordinarily well as dad to his kids had been named.  Is that too much to ask?  But, of course, that would not have opened many financial doors for this organization to do its own philanthropic work.  The not-for-profit group awards Father of the Year to "contemporary lifestyle leaders of our culture" and raises money for its philanthropic efforts.

Hmmmm... "contemporary lifestyle leaders of our culture" -- I guess I never had a chance.  Neither do the ordinary dads doing extraordinary parenting.  Unless we are a lifestyle leader we aren't worth considering.  Now that is kinda sad.  Really sad.
Posted by Pastor Peters at 6:00 AM