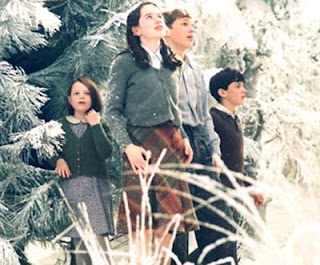 Joe Carter introduced it this way. . .

In The Lion, the Witch, and the Wardrobe, Father Christmas issues weapons to the Pevensie children. Peter receives a sword and a shield, Susan receives a bow and arrow and a magical horn that will summon help whenever it’s blown, and Lucy receives a dagger and a magic vial that restores the health of anyone injured. Later, before the White Witch’s army, Father Christmas tells the sisters that he has given them these weapons only so that the girls can defend themselves “in great need . . . for I do not mean you to fight in the battle.” Lucy is offended, believing her bravery is being questioned, but he tells her, “That is not the point . . . battles are ugly when women fight.”

This has little to do with ability.  Women certainly can fight and as down and dirty as men.  This has little to do with equality.  If combat is the greater test of equality, then we are in a lot worse shape than we thought.  This has nothing to do with choice.  Battle is no one's choice but the desperate end when there is no other choice but to fight.  It has everything to do with the way we have twisted and distorted the values in our culture until this outcome is inevitable.  Having treated the unborn as dead until we decide they are alive, none of us will be satisfied until there is blood on all our hands.  Having defined marriage as the convenient relationship of self-interest -- absent gender or children -- the cause for which we fight is less for others or virtue than it is to make sure we can get what we want.  Having made sex into a hobby designed exclusively for personal pleasure, who is left with clean hands to speak for more than feeling or desire?

We have taken the shredded remnants of nobility God accorded us when He banished us from Eden and set them on end.  In this we have all become the weaker sex and there is none left to raise up cause or country as greater than self-interest.  Indeed, all that is left to us to fight and protect is just that -- the choice of self-interest.  We traded in the holy purpose of our creation for the stained garments of want and desire.  If the cause cannot be rescued in the public square, it cannot be surrendered in the church and in the home.  So when law denies to us the safety of the protection of virtue, we must not now allow the cause to be lost in the context of parent and child, church and home.

Teach your children well.  Teach your boys to protect and defend women and children because they are protecting who is most valuable and precious to them.  Teach your girls to accept the love so offered in sacrificial service and to honor it by extending into their care the protection and defense of children.  Teach those whose tears go out for those who do not return from the battlefield the story of love larger than self-interest, of cause greater than pleasure, and of virtue revealed in service more than demand.  Do this and we will honor the dead and fulfill their dream of a society made larger and a people ennobled by their service.

In the end we all bear the scars of combat.  No one can deny these to anyone -- not to women or children who never venture near the battlefield.  Yet how can we call this progress when we pass on the direct burden of the fray indiscriminately to all?

As Lewis said, battles are ugly when women fight. But societies that send their women off to war are even uglier.
Posted by Pastor Peters at 6:00 AM