Where is our shame? 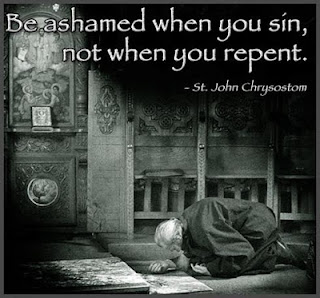 Recently I was reading and came across this quote from St. John Chrysostom:  Be ashamed when you sin, not when you repent.  It seems we have pretty much reversed this.  Our shame is repentance.  We hide our sins, we justify them, and we excuse them by citing the circumstances.  We are replete with reasons why our sin was our only choice or how it was understandable -- even acceptable.  We are forever stringing along the "But, but, but..." whenever we are called to account, called to confess, and called to repent.

I remember the pain of watching former President Clinton say before a nation that knew better:  "I did not have sex with that woman."  The pain was not so much in the sin but in the insistence upon a technicality in his way of looking at it all.  He admitted wounding his wife and hurting his family but could not quite get out that he had sinned.  Without that admission, there is no repentance and there can be no healing and restoration.  His was but a very public example of that which the rest of us do in anonymity and privately.  We hide behind technicalities believing that the admission and confession of sin is the shame.  But the greater shame is clearly the sin and the way we compound it by refusing to repent.

We Lutherans claim much in our Confessions and one of the things we claim is the primacy and power of private confession.  It is a claim backed up largely only with words.  Like the fire extinguisher that lies behind the door waiting for an emergency great enough to use it, we hide private confession so that it is the rarity rather than the rule of our life together.  We believe that if we do not have to say the word, our sin is not real and since the since is not technically real, we do not have to repent of it (merely regret being caught).

John Chrysostom has it exactly right.  There is no shame in repentance.  The shame lies in the sins  --  hidden, excused, justified, denied, and unspoken.  To be honest, sometimes I think it is to our harm that we have the public confession with its rather vague and general words about our sin.  We think that this is to be the norm and we find it much more satisfactory to admit that we are sinful by nature (can't help that, can we?), that we are all sinners (none of us is better than me, no moral superiority here!), and that we have sinned in thought, word, and deed (we don't have to flesh out those words, no sir, just let sitting dogs lie).  But that is precisely why the public confession should not be the norm for us all.  And that is exactly why private confession is so powerful.  To say the sin out loud is the first step to repentance and new life.

I find myself haunted by my sins unspoken, unconfessed, and unrepented.  It is the singularly most powerful part of Christian faith to say them out loud, to speak them before another set of ears, and to be held accountable not only for the sin but for the grace of forgiveness that compels me to amend my sinful life by the power of the Holy Spirit.  A part of me understands how Luther could go to confession too often.  Just as soon as one is spoken and confessed, another catches me up it is chain of regret and disappointment.  But that is not typical of most of us Lutherans.  We fear that Luther might have been a bit mentally and emotionally unstable to seek the grace of absolution so often and to pay the price of shame in speaking out loud his sins before another.  In reality, we are less stable for our refusal to speak the sin, to take it from the heart and lay it before the Lord, in the presence of a confessor, and to walk away free by the power of the Word that speaks and sin's chains are loosed.

No, sadly, we are not so shamed by our sins of thought, word, and deed.  It may be that we find them not so sinful.  Or, it just may be that because we dare not admit them or own them publicly, we think we are effectively hidden from them and their consequence.  And that, my friends, is the greatest deception of all...
Posted by Pastor Peters at 6:00 AM

Pr. Peters: Thank you so much for this painful reminder of how deep our sin truly is. I worry that even the public confession and absolution will fall by the wayside.

I wish someone would have explained confession this way to me many years ago. Thank you for highlighting this on your blog.