The youngunz are here... Listen up now... 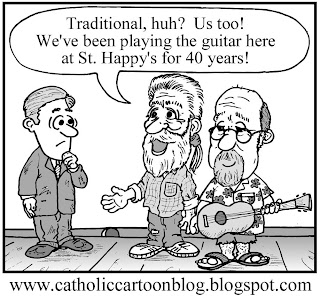 Sadly, many of my generation have left a mixed up mess of worship to our children and grandchildren.  We were the ones who thought the music in the Mass should sound like what we listened to on the radio, that worship was more horizontal than vertical, and that feelings equate with faith.  In Lutheranism as well as in Rome, the seeds of this unfaithfulness are bearing fruit all around us in people who no longer think worship is important, who come for just about anything but the Lord and His gifts, and who have made themselves the center of a show designed more to entertain than to receive the mystery of God.

One Roman Catholic blogger has a post with a few tips to those used to 45 minute guitar masses in which we all hold hands and 45,792 people can commune in 8.257832 minutes.  Listen up, he says, because the next generation is on hand to undo what has been done.  Happily, those under 30 seem to have a better mind about real and authentic worship than the their parents.  Read what he has to say. . .

So, since the young Liturgy is going to take precedence, here are a few things you can do to prepare:

Hello sir,
Thanks for mentioning my blog! However, if I could make a quick clarification, I'm a Byzantine Catholic. We're in communion with Rome, but somehow avoided guitar Liturgies and such. Just thought that might explain the extra standing. And in part 5, those are "litija" hymns, by no means little :) They're sung at a service (at least I guess that's what it'd be called) attached to Vespers for certain feast days and involves the blessing of wheat, wine, and oil. We cut out several of the prescribed hymns at the time because of the time it was taking.

You can visit us on the web! http://www.archpitt.org/