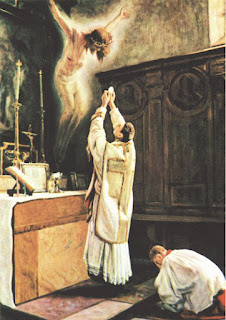 Disguise. To give a different appearance in order to conceal one's identity. Except in the case of Jesus Christ. He comes in humble disguise not to conceal but to reveal. He comes in flesh as the Most High God -- as He has promised. The flesh is not some form taken to deceive. It the form of hope and promise. It is disguised not because God has attempted to hide but because eyes cannot see all that is there. In the same way, the bread and wine are not some disguise donned to prevent people from seeing Him. No, far from it. They are the very means by which He reveals Himself. The Eucharist is then the epiphany where God comes as He has promised but hidden in humble form seen not by the eye but by faith.

In fact, the Mass, like the manger, is the one place where one cannot trust the eye. The eye is untrustworthy because its vision stops at the appearance. And that is the point. In the appearance of one thing is something additional -- not something other to deceive but something surprising and unexpected yet beheld only with the clear vision of faith.

Christ comes in humble disguise. Mary saw because of faith. She ponders not the unresolved question of what might be but the indicative statement of what is -- God in flesh. Joseph knew though, perhaps, not to the same level of confident faith that Mary did. So the shepherds who heard and hearing believed and believing went to see. And the Magi whose vision was marked by faith long before pulling into Jerusalem to inquire where and long before embarking at Bethlehem to kneel, to worship, to offer, and to adore.

The Mass invites us as once the Manger bid the shepherds come and the star drew the Magi. Come and see. Just don't use your eyes. You cannot trust them here. Oh, to be sure, you can see the seeing. You can see the hands folded in prayer, the bodies kneeling in worship, the lips moving in unbroken praise, and their eyes looking and seeing more than what is there on the surface. You can see the seeing as they see. But in order to see you must not trust your eyes. To view the Lord in humble disguise requires faith. Period.

As often as we eat this bread and drink this cup, we proclaim the Lord's death until He comes. Though the Mass is seen only by the faithful, those not yet of the faithful see the faithful worship and adore, kneel and stand, pray and praise. They look where the eyes of the faithful look and they seek to see what only faith reveals. In this way the Mass is catechetical for those not yet of the Kingdom of God. And that is how it should be. If we wonder what benefits those not yet washed in water and raised up in faith when they come to the Mass, it is this. They look where we see and there is Christ. Whether disguised so that only faith sees or obvious for all who look, Christ is still there. So when we look to the altar and our eyes focus upon the bread which is His body and the cup of His blood, they look at Christ also. Though not yet seeing for lack of faith, they learn nonetheless. Do not for a moment believe that external piety is of no value. How many are drawn toward the kingdom of God by the Lord in the Spirit, working through the means of grace, wherein the faithful see Christ?
Posted by Pastor Peters at 6:00 AM

So, Seeker Driven gurus, how does your argument of "making things relevant" stand up to this kind of "personal testimony?"