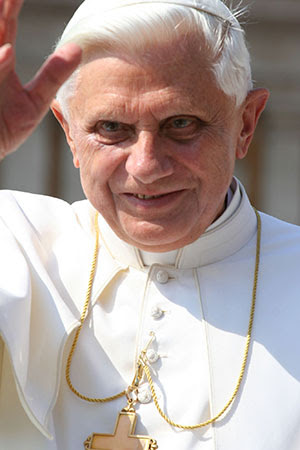 Many fine words have been written about Benedict XVI on the occasion of his retirement.  I want to pass on some very fine words from our own Dr. John Stephenson of Concordia Lutheran Seminary, St. Catharines, Ontario.

A deep divide now exists among the theologians of all Western confessions between those who profess the truth of revelation and those who do not. If Joseph Ratzinger is not the “dean” of the worldwide guild of theologians who belong in the first camp, I don’t know who else could be nominated for the honorific position. Going on three decades ago already, my mentor the late Robert Preus (who was sharply critical of most things Roman Catholic) had considerable respect for him. In Lutheran circles, only Hermann Sasse springs to mind as a figure of comparable stature.

Read the whole thing here in the Canadian Lutheran.

Benedict XVI will be remembered for many things.  For us Lutherans he will always be a friendly figure in an often adversarial relationship.  Friendly because he takes Lutheranism seriously.  Friendly because he is a Biblical theologian whose work is drawn from and returns the reader to Scripture.  Friendly because his legacy is largely in the practical realm of the liturgy where Christ encounters His people in the means of grace as He has promised.  Friendly because of his personal courtesy, kindness, and humility.  It would not be simply for Rome's benefit to find another who embodies these same friendly characteristics.  In a world where Christianity is sharply divided between those who believe the truth and those skeptical of the truth of Christ (except in the area of morality), we Lutherans need voices like Benedict's to enter the conversation and confront the issues that divide us and embrace the ones that unite us.
Posted by Pastor Peters at 6:00 AM

Fine words, indeed! Let us also be careful to remember the very safe and prescient warning Dr. Hermann Sasse made many years ago in a letter that could have been written yesterday. Permit me to refer readers to my blog for the whole post:

Indeed! AS my bes theological buddy put it, the foxholes of the Church are growing ever closer in this day and age.

Fr. McCain - read your piece at your site this AM - very well put!