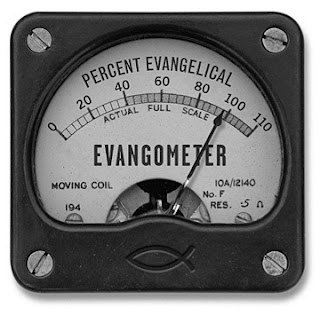 Lutherans have become adept at treating nearly all of evangelicalism as almost Lutheran but not quite.  Some describe evangelicals as incomplete -- especially with respect to the sacraments.  We seem to find ourselves fully at home with conservative evangelicals and fundamentalists in the way they speak of inerrancy, in their strident posture for the historicity of those things liberals have deemed myths, and in their emphasis upon personal faith.  ELCA is thoroughly at home in the liberal wing of mainline Protestantism and Missouri seems very comfortable with the conservative evangelicals and fundamentalists.  Should we?

Perhaps it is because I am becoming older and more curmudgeonly.  Perhaps it is because I don't have a great deal of patience with certain things.  Whatever the reason, I am less inclined than I ever was to see the conservative evangelicals and fundamentalists as almost Lutherans or incomplete -- lacking mainly a sacramental theology.  Instead, I am more and more conscious of the fact that we are way off, very far apart, and not nearly as close as we seem.  Lutherans are not high church evangelicals or fundamentalists with sacraments.  We are nothing of the kind.

When it comes to Scripture, I cringe when we cozy up to those who use the language of inerrancy.  While they have a vested interest in a Scripture that does not err, they have no conception of Scripture as a living voice.  They protect facts that bolster propositional arguments.  We confess the Word of God which is a means of grace -- the sacramental Word that delivers what it says and does what it promises.  We think we are on parallel courses but I fear we are not even headed in the same direction.  We are not protecting a book or facts or the historicity of events.  We are not protecting anything.  We are confessing what Scriptures says (note the tense) about itself.  We are confessing the voice of God that speaks through Scripture (note the tense).  Christ is not the message of Scripture but its very Word.  When Jesus stood up in the synagogue to say "Today this is fulfilled in your hearing," He was not saying merely that the prophets spoke of Him but that HE spoke/speaks through the prophets.  That is a far different perspective than what we hear of from either the conservative evangelicals or fundamentalists.

When it comes to faith, I almost wish we had another word to use -- oh, wait, we do!  It is the Biblical word.  Trust.  Conservative and liberal evangelicals as well as fundamentalists speak of faith mainly on the level of intellect or feeling.  In terms of intellect, faith is knowledge of Jesus, of salvation, and adherence to the propositional truths on which they build their house.  Infants and small children cannot believe this kind of faith.  It presumes understanding and it requires the ability to consent.  In contrast Lutherans do not say that faith is the fruit of baptism but is present in the infants as they are baptized.  This faith, which flesh and blood do not reveal but which is the fruit of the Spirit working through the Word (see above), is trust.  Jesus speaks of the little children who believe in Him and insists that unless we adults become like little children we cannot inherit the Kingdom of God.  The trust that comes so hard to us as age, experience, disappointment, cynicism, and suspicion take their toll, this trust is what infants and small children are born for.  In our debate over infant baptism, we forget that the crux of the issue is not infants or baptism but what is faith.  We speak of faith as if we mean the same things but one group sees faith as largely human endeavor, a decision or choice, implying understanding and the ability to give consent.  The other sees faith as trust imparted by the Spirit working through the means of grace.

When it comes to the Sacraments, it is not just that some real presence or actual power is missing in the way evangelicals and fundamentalists speak of the water or bread and wine.  It is a fundamental disagreement about the way God has chosen to work.  We Lutherans confess that God works through means.  These means are the Sacraments (the visible Word, so to speak) that convey exactly what they promise.  So it is not that their baptism is missing a little added extra, they have no baptism in which Christ works, the Spirit moves, connection to the death of Christ and the impartation of Christ's new life is given.  All that is left is human activity -- presence in obedience to a summons, promise of future compliance, and an adequate description of the ordinance itself.  In the same way, it is not simply that bread and wine are left without the corporeal presence of Christ, they do not believe that Christ can be present there.  Period.  Remember the old question, can God create a rock so heavy He cannot lift it?  Well, the bread and wine are that rock.  It is not merely that they do not go far enough, they are not even on the same path when it comes to the real presence.  They insist that Christ does not mean what He says, He cannot (in contrast to other places where they insist that Scripture says exactly what it means).  It is not a question of language but of belief.  These groups cannot use our language because they do not believe as we do.  A snack and a memory, no matter how spiritual that remembrance, and that is all you get, all Christ ever intends, no matter what He says.

Now I am not saying we need to be Thomists and head on the road to Rome.  What I am saying is that our courtship with evangelicalism and fundamentalism (or for other Lutherans mainline Protestantism) has stripped us of our very identity.  We have become, for all intents and purposes, evangelicals and fundamentalists who like to use a liturgy and dress up on Sunday morning.  Worst of all, we believe it about ourselves.  We try to read our Confessions through this lens, we explain the liturgy as something no one ever has to use but it is part of our own history, and we treat the sacraments as if they were antithetical to our piety instead of the core and center of what it means for us to believe and to pray.

The great danger facing Lutherans in America today is that some of us have exchanged a vibrant and vital Confessional identity and practice for the loosey goosey Alice in Wonderland of mainline Protestantism in which words don't mean what they say and faith is a good feeling that results in good behavior.  The rest of us seem content to believe that Lutheranism is basically a cleaned up evangelical or fundamentalist body which puts on dresses on Sunday morning and follows a ritualized format in which, guess what, words do not mean what they say but mental assent to propositional truth that results in good behavior equals faith.

All in all, it makes me wonder what on earth we are observing in that 500th Anniversary coming up in 2017.  Perhaps instead we should have the ELCAites throw a cocktail party featuring a great camembert and a whole grain cracker with their mainline counterparts and Missourians invite their evangelical and fundamentalist friends to a prayer meeting with sweet tea and fried pies for dessert.

Thank you for this excellent post! As an ELCA pastor this is what I and many other ELCA pastors have always believed and confessed. Granted, not all ELCA pastors, but maybe not all LCMS pastors either.

At our county ministerium it has become obvious to me and my LCMS colleagues that we have much more in common with each other than we do with either the mainline or the evangelicals. And this has to do with the very things you mention above: our understanding of a Word that actually does something, that "delivers the goods," as Gerhard Forde used to say.

Seriously. When I was a child, I was taught and warned that Lutherans were: A. Catholic (notice the big "C"), B. Liberal. Now that I AM one, I see how those with whom I come in contact (protestant/evangelical) see us as part of the conservatives against CCW.

Looks like the "L's" have allowed themselves to be stirred into the alphabet soup that is evangelicalism.

The efficacy (thanks Fr. Peters, for that noun) of God's word was totally missing from my catechesis. Baptists tended to depend on the efficacy of prayer (my effort) to get God moviing, rather than trust in God to accomplish what He said.