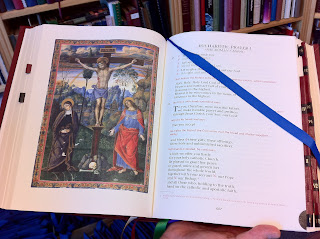 I read this and it got me thinking (yeah, I know, it is dangerous when that happens).

One of the great blessings of the human brain can be found in its ability to take two things and make them one. We have two eyes, which means they necessarily see things differently. Look at the world with one eye open and switch to the other eye. Things appear to move. Viewing the world through one eye also makes things appear somewhat “flat.” The wonder of “stereo-scopic vision” (seeing through two eyes) lies within our brain. The brain takes two different sights and reconciles them, combining them in such a way that a new picture emerges, one that includes a perception of depth.

Let me take this idea and shift it to the discussion of worship.  Liturgical worship adds another view to the brain so that the view of self, the world around us, desire, taste, and preference can be combined to produce depth perception.  Take away the perspective of the moment and we are left with only a past.  Robbed of present and future, we live melancholy lives, regretting who we are and isolated from the time in which we live.  Take away the perspective of the past and we are left alone to the captivity of feelings, desires, taste, preference, and whim.  Robbed of the past, we are victims of our own selves and see everything through the lens of me, of now, and, most often, of impatience.

Think of it this way.  The curse of childhood is that there is no past, no memory, and so the youth without parents, grandparents, and those to connect them to the past, suffers the same mistakes over and over and over again.  The blessing of childhood is its hopefulness and focus upon the future -- a future often impatiently expected and anticipated.  Kids always want to be older than they are and are easily willing to exchange their youth for adulthood before they are ready.  The curse of old age is that there is no future but death, no hope for a tomorrow.  So the aged are often bound to a past which is over and gone, confined only to the cobwebs of memory.  It is too easy to look upon present and future with angst and fear, without the time to adapt to the future, the past becomes a comfortable retreat.

Thankfully, worship is both contemporary and traditional.  That is the genius of liturgy.  It connects us to the past and to the astonishingly rich tradition that has passed down to us from the saints.  This great tradition is a sacred deposit which is ours to pass on but also given to us with the opportunity to add the best of the moment -- not shaping or adapting that tradition so much as completing it in some small way by the faithfulness of the moment.  In text, tune, and song we commend to those to come what we have received and the best of what we have to offer.  The grace of God is always at work, fading into the background that which is unworthy and bringing to the forefront the faithful treasure of both past and present.

What we do when we abdicate to the present is to make our spiritual lives in Christ one dimensional.  There is no depth to the picture.  There is no dimension to the view.  There is no perspective at all.  Just now.  Just me.  Just feeling and desire.  As terrible as this curse is, it is equally terrible to live in captivity, even in subservience to the past.  In pursuit of a golden era of history or attempting to repristinate a yesterday which is gone, we live in isolation from the world -- a most unhealthy isolation that is born more of fear and regret than anything else.

No, Nagel has it right again.  Our Lord speaks and we listen. His Word bestows what it says. Faith that is born from what is heard acknowledges the gifts received with eager thankfulness and praise. Music is drawn into this thankfulness and praise, enlarging and elevating the adoration of our gracious giver God.

Saying back to him what he has said to us, we repeat what is most true and sure. Most true and sure is his name, which he put upon us with the water of our Baptism. We are his. This we acknowledge at the beginning of the Divine Service. Where his name is, there is he. Before him we acknowledge that we are sinners, and we plead for forgiveness. His forgiveness is given us, and we, freed and forgiven, acclaim him as our great and gracious God as we apply to ourselves the words he has used to make himself known to us.

The rhythm of our worship is from him to us, and then from us back to him. He gives his gifts, and together we receive and extol them. We build one another up as we speak to one another in psalms, hymns, and spiritual songs. Our Lord gives us this body to eat and his blood to drink. Finally his blessing moves us out into ur calling, where his gifts have their fruition. How best to do this we may learn from his Word and from the way his Word has prompted his worship through the centuries. We are heirs of an astonishingly rich tradition. Each generation receives from those who went before and, in making that tradition of the Divine Service its own, adds what best may serve in its own day--the living heritage and something new.

The Church takes two different sights and reconciles them, combining them in such a way that a new picture emerges, one that includes a perception of depth.  So it is in worship... the best of the past becomes the living heritage of the saints in the voices, hearts, and minds of a people far removed from this yesterday and the best of the present becomes the gift and heritage of the saints to come when it, like that which we received, is noble, faithful, beautiful, and our best for His glory...
Posted by Pastor Peters at 6:00 AM

"Saying back to him what he has said to us, we repeat what is most true and sure - what a great argument for bringing the Psalms back into our worship.

So, would you say that today's churches suffer from double vision? One eye focused or so they think, on God (Jesus, the Word, the Holy Spirit, depending on what 'brand' you're talking about). The other is on themselves, their comfort, likes, tastes, etc. They are like children looking at an object with eyes crossed.

I live with double vision due to a medical condition Sometimes just walking from point A to point B is a feat. Let me say that the results can sometimes be disastrous, especially if your concentration falters.

As today's churches begin to lose 'concentration' on Jesus and the Truth, the results will (and already are) disastrous.