Who is the most prodigal? 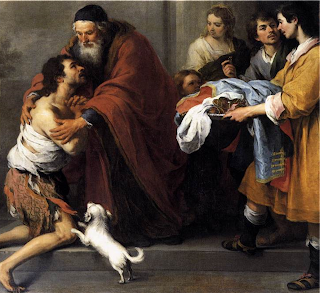 I think you've missed the point on why the faithful son was upset with his father. He loved his father and wanted to be a good son to him and respected him. He tried very hard to do the right thing and obey the 4th commandment. You cannot assume the only reason he was a model son was to get his inheritance! His father didn't show any appreciation to his son. Why bother, when good or bad yields the same result? This happens all the time in families today too. I hear/see it in my own family, coworkers and friends families too, even in the workforce. What we do for our parents is done without expecting anything in return but some appreciation. I understand grace & mercy can't be earned but I've always struggled with this parable.

I think you are missing the point, Anonymous. The older son is bitter, resentful, and jealous. He served his father hoping for reward and not out of love. He did not mourn the loss of his brother and did not rejoice at the reunion. He was not a faithful son at all.