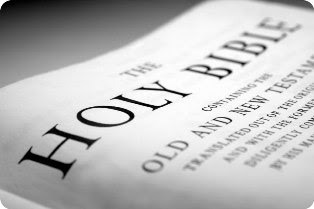 Having lived through the battle for the Bible in the Lutheran Church Missouri Synod in the 1970s, it might seem that since the "Bible" side won, the battle is over.  While it is true that the Synod came down squarely on the side of Biblical authority, inerrancy, and sufficiency, some have questioned whether we might have won the battle but lost the war.  That is, we retained the terminology but in practice we have surrendered Biblical interpretation over the individual and the message of the Scriptures is less about Christ than it is about me.  To put it the way I usually do, we have an inerrant Bible that is merely a book of facts that are true and less the living voice of God speaking and acting through His Word (efficacy).

The Bible isn't there simply to be an encyclopedia of truth or facts, an accurate reference to God's work in history, or a source of knowledge for those interested.  We can have the history right and believe it to be true but still do not have Scripture as God intends it to be -- the living voice that speaks and does what it says.

When we read Scripture we are not reading from a book but hearing the voice of God.  These are not life lessons or little truisms to help our day.  This is the voice of God.  So at the end of the reading, this point is made liturgically by the lector:  This is the Word of the Lord or The Word of the Lord.  When the Gospel is read, this is even more pointed.  The congregation rises as they would for Christ Himself -- which is the point.  This is the Word of Christ.  We address Christ in His Word at the beginning by "Glory be to You, O Lord."  This is not some generic acclamation to the God out there somewhere but the God who is present and who is now speaking to us in His Word.  The Orthodox liturgy makes this even more pointed.  "Wisdom!  Attend!"   After the Gospel, the congregation again affirms that this voice of the Lord has been heard and is recognized as the living voice of God.  "Praise to You, O Christ."

Of course, the liturgy does not guarantee that this understanding is there (there are plenty of liturgical churches who keep the form but have long since abandoned any understanding of the truthfulness of God's Word, the sufficiency of that Word, or even that Scripture IS the Word rather than merely contains it somewhere).  Where we affirm not only the infallibility of that Word but its efficacy, these liturgical affirmations make even greater sense.

The sad truth is that even those churches which might use a term like inerrancy do not see the Word in a sacramental context, as a means of grace, the chief means of grace from which the "visible" Word of the sacraments derive.  And that is the problem.  Our own neighbors in town are Baptists who happily affirm the historicity and inerrancy of Scripture but they do not intend nor do they in practice speak of Scripture as efficacious, as the Word that does what God intends just by its speaking.

Perhaps even more significant is that fact that Lutherans have either forgotten or were never taught this pivotal point and so they do not realize that the kinship they might feel toward others who use the term "inerrancy" may not be as deep or as wide as what they first believed.  Again... the value of catechesis, ongoing catechesis through sermon and teaching, is essential!

Finally, we must not lose sight of the purpose of Scripture -- these are written so that you may believe that Jesus is the Christ, the Son of God, and that by believing you may have life in his name.  Scripture is not a how-to book on various subjects but the Word that speaks Jesus and through which faith is born and His life imparted.  We may use Scripture for other purposes but we dare not forget that this is the one and only purpose sanctioned by the Scriptures themselves and the purpose for which God says He has spoken this Word to us.