Steps to the cross... 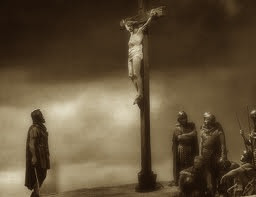 A great number of tragedies have come over the church during the past two thousand years, but none more terrible than the fact that our own generation has come to consider the Christian re­ligion something soft. It has no place in the mod­ern world. It can offer nothing to the most ruthless civilization of money and power which the world has ever known. The reason for this is undoubt­edly the caricature of the person of Christ to which so many pulpits have devoted their ener­gies during the last thirty years. Instead of the world-conquering, world-dominating Christ who two thousand years ago walked from the Cross to the throne, they have given us a dream-haunted wanderer far from the ways of men who walked about Judea two thousand years ago, pathetically trying to do good to a few people, and who then finally died on the Cross, a failure - beaten' by His enemies, beaten by life, beaten and crushed by a Cross.

This picture of the conquering Christ is a lie.

It ignores the majesty of the Cross. Look at Him for a few moments as He went down into death. The three hours of darkness have ended. The scene has become more quiet. The crowd has been awed into silence by the darkness and by the words of the dying Man on the cross. The Roman soldiers look on with indifference, glad that the whole mean business will soon be over. Suddenly He raises His head once more, looks far out over the crowd and cries in supreme, absolute triumph, «It is finished." To the Pharisees at the foot of the cross, the scribes and elders and the Roman soldiers these words must have sounded like the crack of doom. They did not understand them, but there was something wrong. Had they after all failed? They were killing Him. But He seemed to feel that He had won a victory. Had they lost? They had lost. Their last defeat was written in the face of the thorn-crowned Sufferer into whose eyes there had now come the glow of another world and the light of eternal victory.

If those men and women standing at the foot of the cross had but eyes to see, they would have seen every thorn in His crown become a shining gem in His diadem of glory. If they had but ears to hear, they would have heard the voices of wit­nesses, ten thousand times ten thousand"trium­phant with God-given power, hurling into the world the message of the conquering and domi­nating Christ who has the keys of hell and of death. God the Father reaches down from heaven and touches the cross. The arms of the glorified cross reach out and cover humanity. Under them stands the royal apostle St. Paul crying: "Because He was obedient unto death, even the death of the cross, therefore God has also highly exalted Him and given Him a name which is above every name, that at the name of Jesus every knee should bow and every tongue confess that He is the Lord to the glory of God the Father." Under the arms of the cross stands St. John saying: "He is the first­-begotten of the Father and the Prince of the kings of the earth."

The cross grows until it becomes the vision of the Lamb enthroned in the midst of heaven, brighter than the sun and more glorious than an army with banners. The hands that were pierced with nails wield the sceptre of the uni­verse. On the brow that was thorn-crowned and bleeding are the many crowns of universal king­hood. Here is the world-conquering Christ who even today carries a heart-demanding and heart­-searching power to which only the best and no­blest in Christian manhood and womanhood can respond.

It is time for the world to become afraid of Him. He has a strange and terrible way of coming back into a hostile, sin-loving world and a cold, indifferent church and throwing down the candle­sticks as He did two thousand years ago. On the evening of that first Good Friday thousands went down the hill and promptly forgot all about Him. It was so easy to forget. Thirty-four years later, almost to the day, our Lord Christ came back again in the noise and confusion of war, and be­fore His crowned head and uplifted arm Jerusalem crumbled into dust and ashes. Where one cross had stood there now were thousands. They had shouted, "We have no king but Caesar," and they had no king but Caesar...

There is still no room for defeatism and weariness in the Kingdom.  But we shall never know it until we hear His voice saying quietly and assuringly: "Fear now, I have overcome the world..."
Posted by Pastor Peters at 6:00 AM

OP was a saint -- and I had the honor of being a student at Valpo during his last years as President.