How oft would I have gathered you. . . 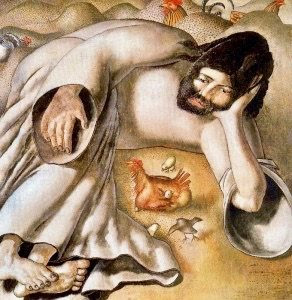 If I were a prophet of Israel, I would have a tee shirt made that said “don’t shoot me, I’m only the messenger.”  When Jezebel destroyed the prophets of the Lord, Obadiah hid a hundred of them in caves.  Amos was tortured and killed.  Jonah ran from the Lord’s call.  Habbakuk was stoned.  Jeremiah was stoned.  Ezekiel died at the hands of those to whom he was sent to prophesy.  Ahijah was killed by a lion.  Zechariah was slain by Joash at the altar.  It was hard to get life insurance if you were a prophet of God sent to Israel.  No wonder prophets could not be recruited but had to be called by God.  It was not the prophets themselves whom the people hated but the message the Lord sent the prophets to proclaim.  Yes it was judgment but it was judgment that came with a call to repentance, to return to the Lord.

Now Jesus Himself felt the sting of rejection.  Herod wanted to kill Him and the leaders of the Temple were plotting His demise.  The people who had once flocked to Him were drifting away.  His disciples found His teachings hard to understand and hard to believe.  Jesus went to far as to ask them if they were ready to take a hike as well.  Now Jesus puts it out where we see it clearly.  We complain that God has rejected us but the rejection is not His, it is ours.  God spoke the promise of redemption first to Adam and Eve in the Garden.  God sent forth patriarch and prophet to keep this hope alive until it would be made flesh in Christ.  God called the sinner back when he departed from the faith and God called all people to repentance and faith.

Though we find it convenient to blame a God who refuses to budge from His insistence upon holiness, it is our refusal to be covered by His mercy and redeemed by His blood that convicts us.  Compare Jesus’ words with the Lenten theme verse:  return to the Lord your God, for He is gracious and merciful, slow to anger but abounding in steadfast love.  The message of the prophets was not a gloom and doom but this tender call to return to the gracious God who delights in showing mercy to His people.  This is the message of Jesus.  God would but you would not.  God is merciful but you reject His  mercy.  The Lord kept hope alive but you killed it with your refusal to believe it.

As we make our way through Lent, we come face to face with this truth.  God is not our enemy.  We are our own worst enemies.  The Lord has not rejected us but offered us the way by the truth of His Word into the everlasting life of His Son.  The story of God’s love is the story of a relentless love that called His people back when left Him and called His people to repentance when they rejected His ways and delivered His people in mercy when they deserved nothing but judgment.  The love of God is relentless.  He goes even to the cross and dies that we might be forgiven and life.

Maybe some of you have learned the joy of the Baby Bum videos.  Now that we have a granddaughter I have encountered these nursery rhymes for kids.  One of them is Five Little Ducks.   Four little ducks went swimming one day, over the hill and far away and each time she called them back but one less duck came back until finally she was all alone.  What a sad nursery rhyme this is!  Why would we tell our kids stories of babies who abandoned their moms and of moms who did not do everything in their power to find their lost children?  In the end, of course, they do come back – at least in the nursery rhyme.  But in the reality of life they do not.

The great sadness of this story is nothing compared to the great tragedy of the Word of the Lord that calls in every age and time, through patriarchs, prophets, and pastors, and the people who refuse His call.  The Lord is relentless in His pursuit of those who leave but there not always a happy ending.  There is the sadness of the Lord who sought out sinners and those who refused Him, who called the lost to repentance and the lost denied Him, who loved the unlovable when they loved Him not.  Jesus tells us this sad story so we will hear His voice, and hearing may believe His Word, and believing may have forgiveness and life in His name.  His is not the fickle heart that refuses but the heart filled with mercy and love that redeems, restores, and forgives.

In Matthew’s gospel, these words of Jesus are placed near His crucifixion.  For there is no more unmistakable context for the steadfast love of the Lord than the cross. There is the mercy that a world mired in sin and its death needs.  There is the grace that beckons to the guilty and bids the wounded come.  There is the love that is relentless in pursuit of the lost.  There is hope for the hopeless.  The prophets of old were messengers of this Word.  The pastors who stand in this pulpit are the messengers of the same Word.  The Scriptures are this Word and baptism washes this Word and the Holy Communion feeds this Word, the steadfast love of the Lord for you endures forever.

Love calls you here.  Do not run from it but run to it.  Return to this Lord.  Do not run from Him but to Him.  Let your questions and your doubts drive you into the Word and let your pride melt before this relentless love for God does not seek your destruction but your life, not to judge you but to save you, and not to wound you but to heal you.  For surely there will be days when you are tempted to think God your enemy and there will be times when it seems He has abandoned you.  There will be days when troubles will seem impossible and solutions will escape you.  There will be times when it seems you do not need God and God does not want you.  There will be excuses you use to justify your sins and your will plead that it is not your fault.  But God cares for none of this.  He wants only YOU.  He has loved you from before you were born.  He sent His Son to suffer in your place and die your death. There is no doubt about His love for you.

Return to the Lord your God for He is gracious and merciful, slow to anger and abounding in steadfast love.  How oft would I have gathered your children together as a hen gathers her brood. . .  This is the same love and the same Gospel and the same truth.  It points you to the cross where love is not a word but a selfless act of sacrifice.  It calls you to a life lived not in fear by yourself but in confidence that the Lord is on your side.  Therefore, my brothers and sisters, whom the Lord loves and longs for, His joy and crown, stand firm in the Lord as His beloved children, hide in the shelter of His saving wings, and treasure the love that would suffer all to redeem you, a lost and condemned sinner.

In the name of the Father and of the Son and of the Holy Spirit.  Amen.
Posted by Pastor Peters at 6:00 AM

What time is it? I am having trouble reading the clock inside the Innsbruck Cathedral:

Pastor Peters, are you really preaching 10 minute sermons? You have put your faithful on a starvation diet.

Good day !!
We are Organization formed to help people in need of help,such as
financial assistance, Do you need a loan to pay your bills? Do you need
Personal Business Car or Student loans? Need a loan for various other
purposes? If yes contact us today.
Please these is for serious minded and God fearing People only.
Email: (jacksonwaltonloancompany@gmail.com)
Text or call: +1-586-331-5557.
Address is 68 Fremont Ave Penrose CO, 81240.