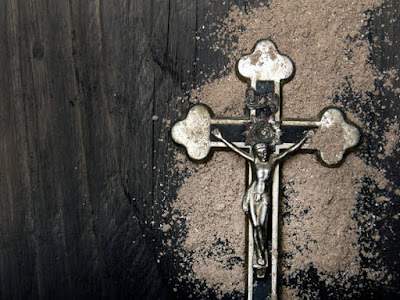 I do not know why just these verses were chosen from Matthew 6.  It used to be all 21 verses and not a few verses picked from the beginning and the ending.  Originally it included the giving of the Our Father and the call to forgive.  Because they were omitted, it ends up sounding like the big things to be concerned about are how we give instead of whether we give, how we pray instead of praying, and how we fast instead of tasting.  That is not Jesus point.  In fact we miss what He is saying entirely if we concentrate on giving so no one notices or praying without looking like we are praying or fasting while we look like we just got done pigging out at Golden Coral.  That is the easy stuff.  Just about anyone can do that.  After all, we love rules because we know exactly where we stand before rules.  Tell us what we should do, and we will do it.

Jesus is not laying down rules for us to follow.  He is exposing the weakness of a heart empty of faith, a heart that has forgotten that God’s greatest gift is His mercy. For if justice were the bigger thing, none of us would even be here.  Justice would mean the Lord would abandon us to the sin and death chosen in Eden.  Justice would mean that the only reward in this life was the passing notoriety of having our good deeds lauded before we die.  Jesus has come not for judgment of those who deserve it but for mercy.  He has come to call sinners to repentance and to pronounce forgiveness upon them.  This is the big thing.  Repentance and forgiveness within the mercy of God.

In verses 14-15 Jesus makes this plain.  If you forgive others their sins, your heavenly Father will forgive you but if you don’t forgive others their sins, neither will your Father in heaven forgive yours.  You see, the big thing is sin and the only thing bigger than sin is the mercy of God that endures forever.  This forgiveness is God’s gift to us because of Christ.  It is a transformative gift which does not merely remove something from the exterior of our lives but changes the way we deal with one another.  If God does not count our sins but forgives us, how can we justify remembering and holding the sins of others against them.  Even worse is when we lie and say we forgive but we delight in remembering and resenting both sin and sinner who commits it.

Some wonder what ashes have to do with all of this.  Ashes is not how we judge the authenticity of the confession.  We love tears, we love the emotional display of sorrow, and we love the earnest promises never to do it again.  We have turned repentance into an acting lesson.  We act it out before God in hopes that He will judge our show worthy.  We do not do this only for confession, we also do this when we announce the good works we do for others and when we pray with great show before those who are listening.  We love emotion but repentance is not about emotion.  It is about something far more real that feelings.  It is about mercy.

David wore ashes when the secret sins of Bathsheba and her husband could no more be hidden.  Tamar, daughter of David put ashes on her head after her brother deceived her and violated her.  Mordecai and all the Jews wore ashes before their Persian oppressors.  Job sat in ashes.  The King of Nineveh too.  Jeremiah the prophet calls us to sit in ashes before the Lord.  These ashes are the public admission of our disgrace.  We wear them not to tell the Lord we are sorry but to own the consequence of our sin, without blaming the devil or excusing them because of circumstance  Confession is not about how sorry you are or about all your promises never to do it again.  Confession is simply about owning your sin.

Absolution is not about saying your sin was not so bad or not to worry about it or it is no worse than others or that you will make up for it.  Your sin has killed you.  Your primary concern should be about the death you wear in your body because of sin and not whether or not you are better or worse off than others.  Absolution does not mean God has shrugged off your sin or decided you are worth forgiving.  God has taken the sin you owned away from you and made it His.  Your sin now belongs to Jesus and to the cleansing power of His blood.  What you admitted, He has borne even to the suffering and death of the cross.  He died for the guilty so that you might be declared just and holy and forgiven.  He died for those unworthy of being forgiven.  That is the big thing.

God lifts the needy from the ash heap, says the Psalmist.  He does not do so because He has judged them worthy or they made a good show of their contrition.  He forgives because it is His will and purpose in Christ.  You own your sin so that Christ may own and restore you to the Father.  Ashes are not meant to look pretty.  They are dirty.  Because your sins are dirty.  Because you are dirty.  But those ashes look like a cross.  Because God lifts the needy from the ash heap by the cross.  He has forgiven you.  Now, forgive others in His name.

Do not take back your sins from Jesus and wear them back home tonight. But neither do you get to judge what is sin and whether the sinner is worthy of forgiveness.  The power that God has given to you is to the power to forgive one another in His name and not to judge each other.  It happens here in Church when the Pastor speaks in the name of Christ and absolves you.  It happens in behind a closed door when the guilt cripples your life and you seek confession and absolution from your Pastor’s hand.  It happens in the hope when husbands forgive their wives and wives forgive their husbands and parents forgive their children and children forgive their parents and all of them forgive neighbor, co-worker, and even stranger.  Not because they have convinced you they deserve this forgiveness or have suffered long enough or done something to convince you that they are contrite and worth forgiving.  You forgive simply because God lifted you from the ash heap by the cross and turned this cross into your calling, so that you may forgive others as you have been forgiven.

You may have thought that the big thing was making sure you were humble when you helped the needy or that you prayed secretly or smiled like you pigged out a the buffet when your belly ached from your fast.  Those are the easy things.  The hard thing is this.  To admit and confess your sin.  To wear it before the world.  To repent not as a show but as people who own the truth of their and admit their lives are an ash heaps.  For God lifts sinners from the ash heap all the time. And this is His gift to you.  That you may forgive others as you have been forgiven.  Not as the small print you hate to read in an otherwise glorious contract of grace but as the fruit of the forgiven who know that mercy is bigger than justice, mercy is better than justice, and mercy endures while justice is forgotten.

God help us to do this in Jesus’ name.  Amen.
Posted by Pastor Peters at 6:00 AM

I liked your sermon very much.