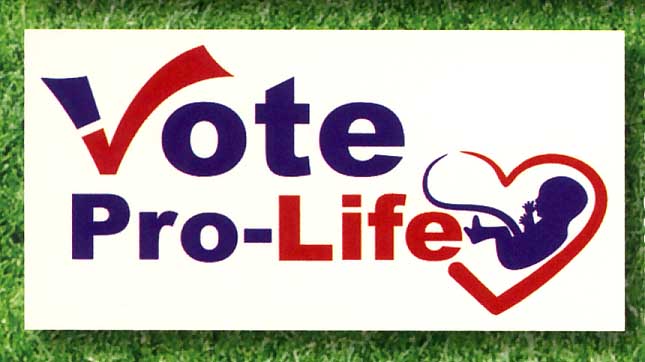 Honestly, I really do not know what to say in the wake of those who claim to be Christian and defend and promote abortion in the latest stages of pregnancy or those who would fight against any and all restrictions upon the right of the mother to take the life of her unborn child.  Maybe it is true that the whole issue of pro-choice or pro-life has become a political football in a game that has less to do with the essential position itself than it does political power and control, however, when the points in the game are human lives, how can we continue to play it?

It is clear that the Democrats have become the party of choice -- a sacred tenet in their game plan to regain the White House and Senate and control the destiny of our nation.  It is also clear that the Republicans are the part of life -- a sacred plank in the platform that appeals to their base and to their vision of regaining the House and keeping the Senate and White House.  But somewhere under this all I am abhorred by the way we argue and talk as if this were all theoretical and not about actual children, killed in the womb, for the same of something as difficult to nail down concretely as the mental or physical health of the woman.

How far will such a future take us?  Where will it end?  As I have said before, we have lived with the horror of safe, legal, and free abortion long enough to end the lives of one and half the times the population of Canada and it is clear that the longer this continues, the harder it is to turn it back.  It has, much to my regret, become the norm for most Americans.  While it is easy to see how someone can support something in theory, it is a grave shock to see how people can support in specific detail how a child might be killed moments prior to birth or moments after (if the mother has a change of heart).

We cry out that guns are killing our kids but guns have killed very few in comparison to the many who are routinely taken from life and consigned to death either by medical procedure or pill.  In fact, many of the same voices crying out against the school shootings are crying out for the right to killing the unborn to continue without any kind of restriction.

Sadly, the media is against any honesty in this discussion and many churches would prefer the whole thing would just go away rather than take a stand.  The fear of offending people has become the more powerful motivator over the fear of offending God.  We are surrounded by voices of death shouting down every reasoned argument or rational defense of life.  We will not debate our way through this and we will most certainly resist exile from the public square and persecution from those who control official media and social media but the cause is more urgent now than ever.

It is probably going to offend many when I say that abortion will need to become not one of many but the signal issue and the single issue for those who defend life.  There are few elections in the near future but we must begin now raising up the cause of life as the ONLY issue about which we cannot compromise -- whether in the election of those who serve and lead us or in the legislation passed and enforced by those who serve and lead us.  Do we really want to be on the same side as North Korea and China and Herod of old when it comes to our appreciation for life?
Posted by Pastor Peters at 6:00 AM

For a Christian, being pro-life should be the correct and righteous position, but those who raise their political allegiance over their faith convictions, it is normal for them to side with the wicked. It is similar to OT Israel, when many Jews claimed to be the children of God and under the covenant with Abraham, yet went after idols at the same time, sacrificed their infants to Baal, and turned their allegiance away from the Lord. In our day, many Christians simply do not let their so called faith guide their politics or cultural values. It is an old story. I believe those who are pro-choice are reprobates and cannot offer any justification for infanticide, Their faith is neither genuine nor simply misguided. They are shameless and have joined hand in hand with the wicked to engage in the murder of unborn children made in God's image. Such people can make no claim of innocence before God. They will perish in their sins unless they repent.