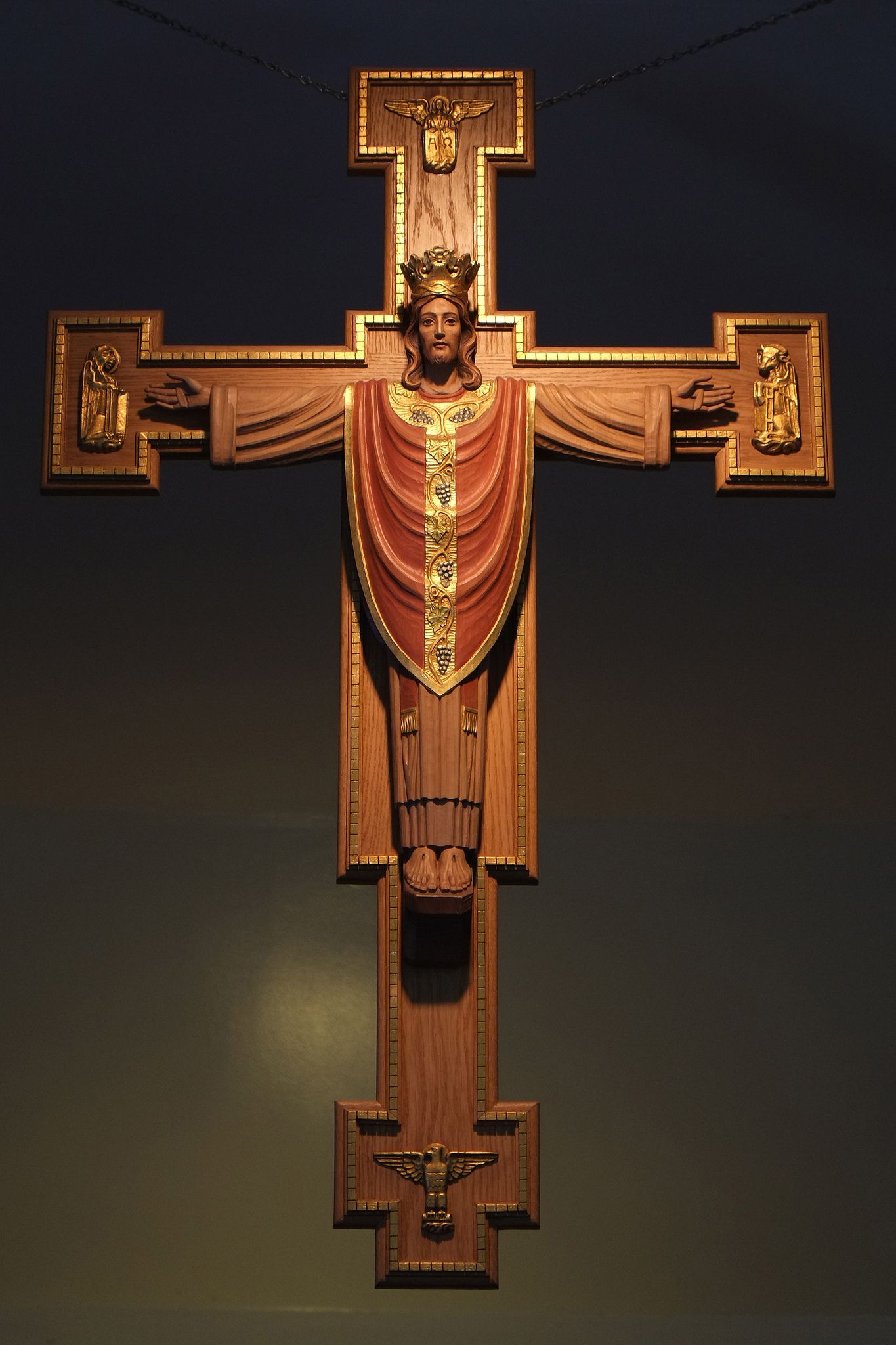 In at least three of the hymns in our hymnal, Christ is sung as victim and priest, the offering and the one who offers it.  Only in keeping these two together, is the great and grand mystery of the Holy Sacrament of the Altar preserved to us as the Gospel we eat to live forever.  If you get either side of this wrong, the Supper is lost to us and it becomes something foreign and alien to what Christ instituted when He gathered in the Upper Room and in the midst of the Passover, took bread, gave thanks, and gave it as His body for the forgiveness of sins and took the cup of wine, gave thanks, and gave it as His blood shed for the forgiveness of sins.

Christ the victim.  The offering that atones for sins, pays the price of those sins, and makes right the relationship between God and His people is nothing that we do.  None of our good works has the power to redeem anyone, not even ourselves.  None of the things we do can be added to what Christ has done without rendering Christ’s offering inadequate and tainting what is holy with what is not.  Christ is the offering.  He is the innocent Lamb of God who takes away the sin of the world.  What John first pointed out, the Church now echoes every time we come together for the Lord’s Supper.

Christ is the victim.  Jesus does not offer something to God.  He offers Himself.  He offers to the Father the one and only offering which has the power to make right the wrong of sin and to restore the blessed unity of Creator and His foremost creature.  Christ does not look for something to offer but offers Himself.  Indeed, as He says to Pilate, “For this I have come into the world and for this I was born.”  Whether He was speaking with doubting disciples or praying in the garden, Jesus insists that He must drink of this cup, that He cannot pass it by, that everything hinges upon His self-offering on the cross.  Over and over again our Lord tells His disciples that this is the Gospel, that the Son of Man must suffer betrayal, be crucified as a sin offering, and die, and on the third day rise again.  For there is no forgiveness of sins to be preached in His name or in anyone’s name unless it is the preaching of this offering of Himself on the cross.

Christ the priest.  But Jesus does not offer this reluctantly nor is He tricked into it.  Jesus is not some unwitting victim of a people who were more crafty than He was and is or more cunning in their pursuit of a goal.  Jesus will not be rushed to the cross nor will He avoid it but He must meet it on His terms and in the ripe and fullness of time His Father has appointed.  We do not offer Him but He offers Himself.  Not the scribes and Pharisees and rules of the Temple who conspired to kill Him nor Judas who betrayed Him or Satan who thought the end of Jesus was His victory over the Father can take credit for the offering.  Christ offers Himself at the right and ripe moment in time.

The day that was written before time began and to which all time looked was the day Christ made His way to the cross and offered Himself as the perfect and spotless offering, the one and only holy Lamb of God that takes away the sin of the world.  As the Old Testament priests offered the blood of lambs and oxen and goats to prefigure the offering of the Son of God in human flesh and blood, Jesus presided over His own sacrifice of His flesh and blood on the altar of the cross.

This offering cannot be repeated nor can anything be added to it or it will take away from the perfect sacrifice and render it defiled.  As often as we eat of this bread and drink of this cup, we proclaim the Lord’s death until He comes.  And this is our solemn and joyful duty – to remember and proclaim first by eating and drinking in faith and then by proclaiming the sacred mystery of the meal that feeds forgiveness and everlasting life.  The eating and drinking is not a metaphor or symbolic language and neither is the forgiveness of sins that comes by that eating and drinking.

But there is even more going on here.  We are incorporated into Christ by this eating and drinking so that Christ abides in us and we in Him.  What Christ does in this Holy Sacrament is offer us to the Father.  Rome got confused in all of this and thought that we were offering to the Father the body and blood of Christ but it is completely turned around.  By eating and drinking this body and blood of Christ, Christ is offering us to the Father as His holy and perfect bride, the Church.  We eat the offering and become one with Christ the victim and offering.  And He who has washed us clean by His blood, declared us just as gift of grace, and welcomed us as the prodigal sons and daughters home, now lifts us to the Father as His most precious possession.  Others forgot that Christ was Victim and Priest and saw this Sacrament as their own remembrance, with the only power of bread and wine to trigger our own memory, but emptied Jesus words of truth.  They saw their incorporation into Christ as the fruit of their own desire, conversion, or prayer.  They became the priests of their own salvation.  Victim and priest must be held together.

Christ is the victim.  Christ is the priest.  He offered Himself once in time, His flesh for the life of the world and for you and me.  Now He offers us over and over to the Father as the people of His promise in whim the Father can delight and as a people who have been made perfect and clean by the blood of Christ.  Now tonight and every Sunday and every Thursday in the blessed Holy Communion, Christ gives Himself to us and we feast upon Him.  He is victim and offering and He is priest and offered.  But hidden in all of this, is the wondrous gift of being called the children of God and presented to Him who made us and who sought our redemption.  Christ opens His arms and delivers us to the Father and says, “Father, here is my bride, here is she for whom I suffered and died, here is she whom I have made perfect and holy.  I loved her more than life and now in love I present her to You that You may proclaim her worthy for My sake.  Christ offered Himself to the Father for us, offers Himself to us, as High and Holy priest, after the order of Melchizedek, and now He offers us, who have been made one with Him in baptismal water and in this blessed communion.
Father, these are those for whom I have died.  These are Your beloved, restored now to You forevermore.