Where go the Methodists? 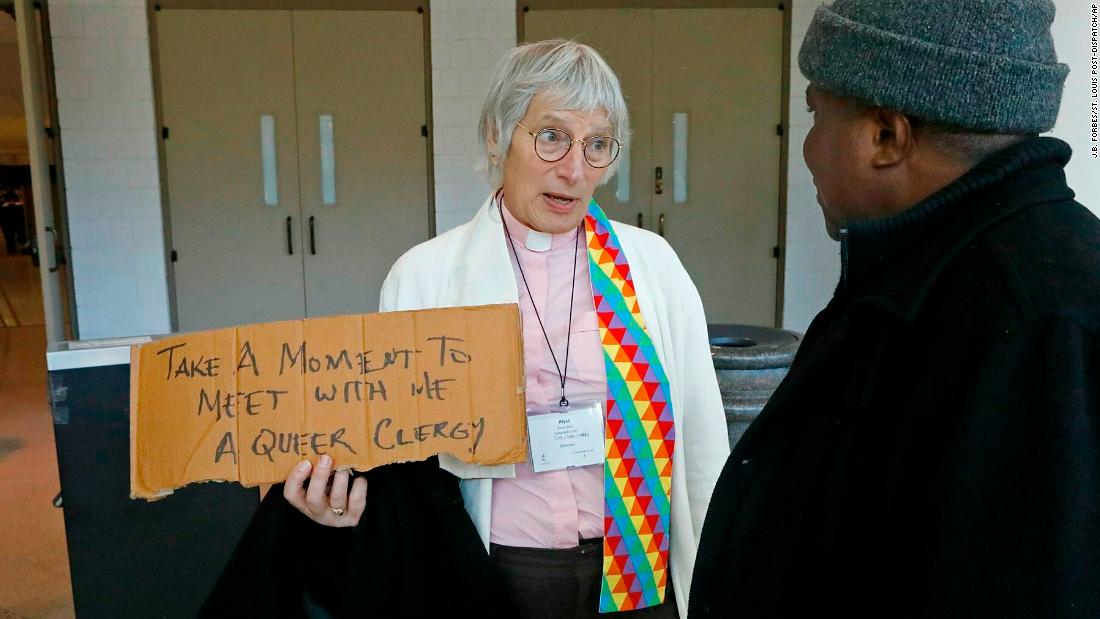 A historic vote but to what end?  When the Methodists voted to agree to the most conservative of the options presented for what to do about GLBTQ marriage question, some rejoiced while others lamented even as most wondered about the shape of the future for this denomination.  Do we stay or do we go?  That is the question some congregations and clergy are facing in the wake of a surprising decision to retain their historic position on the issue.  Yet what kind of victory is it?

If Methodists split, the fracture will surely leave the denomination weaker than ever but it would at least offer some measure of homogeneity to each group.  The vote was significant but not resounding (438-384) and it probably signals the leanings of Methodists -- at least the ones in the US.  Though clergy who violate the ban could face loss of income or suspension, it seems unlikely that those committed to the GLBTQ agenda will stop what they are doing.  It also seems unlikely that they will fight all that hard to stay in a church body they cannot support.

Bishop Hee-Soo Jung of the Wisconsin United Methodist Conference said, "We are a wounded church. We are a divided church. We are a church in pain, and we are doing harm to each other."  That is certainly an understatement.  No one is entirely happy with the way things turned out.  Some believe that this vote will come up again and again and again until the progressive wing gains the upper hand.  Furthermore, it was another case of the leaders on one side of the issue and the folks in the pews on the other side.

The denomination’s bishops and many of its most influential clergy pushed hard for a choice that would have allowed local congregations, conferences, and clergy to make their own decisions about conducting same-sex marriages and ordaining LGBTQ pastors. This proposal was called the “One Church Plan” and it had, as one of its goals, the hope that the denomination might be kept together. In the end, Methodist delegates rejected its recommendations and chose the "Traditional Plan," which affirmed the denomination’s current teachings against homosexuality -- a stance already flagrantly and defiantly ignored by many within the denomination.

Underneath this all is another issue.  That is the fact that, in essence, this church body had a referendum on the teachings of Scripture and the teachings of Scripture lost.  More than 40% decided that the Bible was wrong and they did not want to be on the wrong side of a culturally defining issue.  We always say we cannot vote on what the Scriptures say and yet that is exactly what we do too often.  Since it is by vote, a vote can just as easily say that the Bible's position is either no longer relevant or tenable OR that this was not the correct reading of the Scriptures in the first place.  It is a tenuous victory, not that we should ignore it but neither should we be too comforted by it.  Stay tuned for more. . .
Posted by Pastor Peters at 6:00 AM

I was reared in the Methodist Church, and yet, I no longer recognize that church today. What is was then, is not even faintly visible in what it has become today. I have family who are still Methodists, and I puzzle as to why they remain.

I am not aware of any of them being flaming LGBQTXYZ advocates, but I think they probably remain for fear of being left out of everything if they leave. Where would they go? I do not have a church home myself, in large part, because I chose to leave. My local LCMS has told me I am not welcome there. The local Presbyterians are all LGBQTXYZ folks. The local Baptists are howling maniacs. The Roman Catholics preach and practice so much that is simply not true, contrary to Scripture and reason.

Just yesterday, my wife and I visited a Church of the Brethern Parish which was simply strange. The "service" opened with 4 songs (not really hymns) in quick succession, followed by a 48 minute sermon (good sermon, lots of content, but way too long). Then there was a very brief prayer (about 15 words), and everyone got up to leave. No benediction, no offering, no nothing. But at least it was not rainbow colored!

Where does on go for WORSHIP?

"My local LCMS has told me I am not welcome there."

Sorry to hear that. Since you are posting anonymously, it would be interesting to learn why that has been the case for you.

If the liberal UMC congregations really wanted to be sneaky with gay weddings, all they would have to do is contact a church body with whom they have altar and pulpit fellowship. How hard would it be to invite a pastor from a church body such as the ELCA or the Episcopal Church to preside over the UMC gay ceremony? Various loopholes in UMC law exist if liberal congregations know how to find them......

Anon @ 3:10 pm
The local LCMS parish elders sent me a letter, signed by the pastor and the head elder, telling me that they did not like my clothes and that I could not return unless I followed their dress code. I can walk down any street in America dressed in exactly the same way without raising an eyebrow, but not within the LCMS precincts. The letter was followed by a formal visit from the pastor and the associate pastor to make sure that I would not be back. I have not gone back. Missouri is a strange place!

That is strange. Unless you were cross dressing or wearing something extremely sexually suggestive, I cannot understand why the pastors and elders would not want you in church.

I was once asked to be an usher at the Sunday morning service in an LCMS congregation. The dress code was a jacket and tie, but I refused to wear them. Needless to say, I lasted about two weeks as an usher. The joke was that I ushered at my previous LCMS congregation, and no one cared if I wore only dockers pants and a polo shirt....

In he past as an usher I've seen people come to church looking like they just rolled out of bed, put on some flip-flops and whatever they had piled on the floor the night before, and on the way grab a Starbucks Frappuccino to bring in after parking their Cadillac Escalade in the church lot.

Hey Eric, please give me the name of the Cadillac dealership. I promise to wear a suit when I am ushering ;-). Ted