Death with Dignity or Life with Hope? 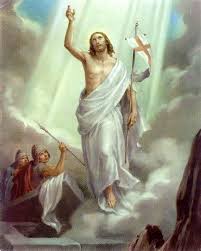 Sermon for Easter late, Series C, preached on the Resurrection of Our Lord, Sunday, April 21, 2019.

Death with dignity is the mantra of our modern age.  Either life on your terms or death with dignity.  Our culture insists that nobody should be born to a world that does not want him or her.  Nobody should be forced to live a life they find unhappy or burdensome or painful.  Nobody should settle for a shell of a life as the aged in nursing homes or the frail of mind or body whose life is not well lived.  Nobody should have to have to care for people simply because they cannot care for themselves.  If you cannot have life on your terms, then death with dignity our culture cries!  A simple procedure in a clinic and flush the life away.  A pill and you breathe no more.  A syringe and those whose lives are not worth anything can end them without pain.  A late night mistake is swept away by a morning after pill.

The world is so good at demanding life on our terms and death with dignity.  But what kind of consolation prize is dignity if you still have to die?  Did anyone ask the child in the womb if the child preferred a hard life to an easy death?  What happens to those who in a weak moment would end it all but who change their mind in the morning?  What do we say to a child who has a life of struggle to look forward to – death is all the hope that life wrote for you?  What do we say when death becomes merely a choice and life is made cheap by the toss of a coin or the whim of a feeling?  Life on our terms was the lie of Eden and the curse of sin.  Death with the illusion of dignity is another lie from the same mouth.

The world may call it death with dignity but thanks be to God that He does not.  The Lord finds no dignity in our death.  God finds no dignity in death to answer for a long life of suffering or a short life ended in the womb or anything in between.  The Lord has not surrendered hope to a quick and painless end to life.  No, indeed.  Do not buy into the lie that death with dignity can make up for a painful or sorrowful life.  It is a cheap and easy solution that is no solution at all.  It is the lie upon lies that still threatens to deceive even Christians and it is the shadow behind our celebration of Easter and Christ’s resurrection victory today.

Death is not nice or kind but ugly, humiliating, and shameful.  In the end, a breath and the heart stops and the pain and suffering may be gone but in order to end it, you have to kill the patient.  None of us is at ease around death.  How many people die alone at home or in hospital rooms because their families cannot bear the pain of watching them die?  If death is so friendly and kind, why can’t our families be friends with it when we lay dying?  You and I know that death with dignity is the same kind of pernicious lie as life on your own terms.

There is a time to mourn, a time to be born, and a time to die and that is where it would end if God had not sent His one and only Son into the womb of the Virgin, to live the holy and righteous life we could not and to die in our place the death we feared most of all, and to rise to bestow upon us the hope, the promise, and the gift of life that death cannot diminish or overcome.  That is why we are here today.  The reign of sin is done and the prison of death has been undone by Christ and by the power of His resurrection.

To say Christ is risen is not to repeat a fact or offer an opinion.  To proclaim Christ is risen is to acknowledge that death never had and does not now have any dignity but neither does it have any power before the Risen Lord and those who live in Him.  It cannot steal from us that which Christ lived and died and rose to give. It cannot end the life that is eternal.  Even the grave itself has surrendered its threat and become a pawn in the hands of the mighty God.  For as the Psalmist reminds us, the grave is the gate of death and the way to everlasting life.  Here is hope for the sinners whom God has declared righteous and here is the life that comes not as consolation prize for the dead but as the new and true reality no longer captive to sin and its death.

We may shudder before death but the devil shudders before the empty tomb.  We may attempt to make friends with death so long as it waits until we are done with life or comes quickly and painlessly but God refuses to make friends with death.  He has poured all His power and might into answering the claim of death upon our lives.  He does not surrender life to any idea of a well lived life or even to death with dignity, no the Lord insists that those who die in Christ shall live in Him.  The Lord insists that He will extend forth His own hand into the dust of the earth and bring forth all the saints and deliver them to everlasting life.  The Lord will wipe away tears forever and not simple console in the moment for the life that Christ gives to us is greater than any pain death can inflict.

The cross finished off death by killing it.  And it could hold Christ no more.  In three days He rose.  His disciples were told it was coming but had grown so accustomed to death they found the resurrection of Jesus an even greater shock than His death.  They walked to the grave not simply as the curious who wondered what the story was.  No, they came as a people who wondered if hope was real, if the Word of Christ could be trusted, and if death had given up not only Christ but all who die in Christ.  It took them a while.  It takes us a while.  We still wrestle with the great temptation to make our peace with death instead of trusting the promise of life.  We still surrender our hope to the fear that death still has its claim on us and therefore we must find a way to die with dignity.  We will grieve and shed the tears of a people who want to hope but who struggle to be convinced that hope is as real as death.  Our faith is not yet complete.  And this is why we come today.  We come to be renewed in the Word and refreshed by the Easter meal.  We come to taste our future in the crucified and risen flesh of Christ and His blood.

We have come to hear again how Christ died and how He lives now, never to die again.  We have come to feast on the meal that anticipates a future even as it delivers to us the fulfillment of the past.  We have come to remember the dead not by their lives but as the living who have a future.  We have come to rehearse the story of life so that we have something to say to a world still figuring out what to do with death.  We have come to expose death’s lie and to be reborn in truth of the hope Christ has given us.  We have come because we now believe that dignity in death is no blessing if death is still the end.  We have come as did the people of old who peered into the grave and rushed home knowing that nothing could ever be the same again.

Christ has died.  Christ is risen.  Christ will come again.  This is our joyful acclamation.  We say these words not only for Jesus but because they are our hope for more than a long life and an easy death.  We shall live in Christ forever.  Death has no dignity and the hope we have in Christ has no match.  It is over and death never had a chance.  At its worse, it can only take from us that which sin had already defiled.  And soon the day will come when we shall wear the same glorious bodies as Jesus and God shall erase death from our memories forevermore.  Easter’s news is that Christ lives, we have hope, and we don’t have to settle for lies and illusions, for the most real life of all is that which awaits those who are baptized into Christ’s death and resurrection and who live in Him by faith.  Thanks be to God!
Posted by Pastor Peters at 6:00 AM