Receive the Son & Receive His Inheritance 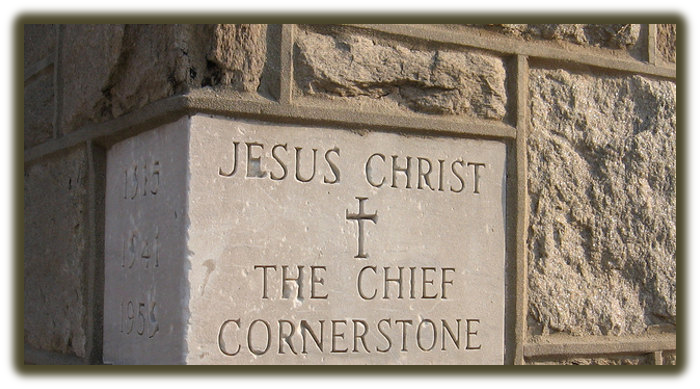 [Jesus] looked directly at them and said, “What then is this that is written: ‘The stone that the builders rejected has become the cornerstone’?” (Lk 20:17).

Last week we heard the parable of parables, the story of the Prodigal Son.  This son asked for his share of the inheritance before his father’s death.  This request wasn’t just for money.  Ultimately, it was a rejection of the father; a wishing that his dad was dead.

Today we hear another parable from Jesus, and again, rejection and inheritance plays a part.  A man planted a vineyard and leased it out to tenant farmers, expecting his rightful share of the fruit.  So when harvest time came, he sent his servant to collect.  But the tenants rejected the man and his servant.  They refused to live up to their agreement.  They beat the servant and sent him away empty handed.  And so they did to the 2nd and 3rd servants that were sent.  Finally, the man sent his son, thinking the tenants would respect and honor him, but just like before, they didn’t.  In fact, they escalated their violence.  They said, “This is the heir.  Let us kill him, so that the inheritance may be ours” (Lk 20:14).  And so they did.  Thinking they could lay claim and take the inheritance, they rejected and murdered the son.

What foolish thinking!  How could these men think they would keep the vineyard after killing the man’s son?  In what world do murderers get the inheritance of the one they’ve murder?  That’s not how it works.  These tenants were fools, rejecting the man and his son.
At the end of the parable, Jesus explained exactly what would happen to those foolish tenants: “[The man would] come and destroy those tenants and give the vineyard to others” (Lk 20:16).  And therein lies the meaning of this parable, reject the Son and be destroyed...but receive the Son and be given his inheritance.

We easily see how the tenants were foolish, but there’s someone else in the parable who was even more foolish, at least by our standards, and that was the man.  How foolish did he have to be to send his son?  In no way had those tenant farmers exhibited any trustworthiness.  I no way had their actions said they would honor the son.  In every way they showed themselves to be scoundrels capable of murder; and yet, the father still sent his son to them.  He gave his son into the hands of killers!  Why?  Because that’s what our Heavenly Father does.  God gives.  He continually gives.  He gave His Son because of His love for you.

This parable is nothing else than a retelling of the story of salvation.  The man of the parable is God the Father.  The tenant farmers are the people of Israel and its religious leaders.  The servants sent were all the prophets of old whom God sent to call His people back from their sin.  This call to repentance was continually rejected, over and over again.  Finally, God sent His beloved Son, and He too was rejected.  The religious leaders refused to receive Christ.  They refused to listen to His call of repentance; and with jealous anger, they delivered Him over to be murdered on a cross.

It seems foolish that God would do such a thing.  Why give His Son up to be killed for sinners, for people who continually rejected Him?  Because of His love.  Our heavenly Father gave His Son into the hands of murderers so that He could have you, so that He could save you from sin and death and give you the inheritance of everlasting life.

Just like the tenant farmers, we reject God over and over again.  We’ve been rejecting Him and sinning ever since our first parents.  Instead of recognizing that our life is a gift from Him, we live as if we’re in charge.  We reject any claim God has on us as our Creator.  Instead of living according to His Word and commands, producing fruits of obedience, performing the good works expected of us in service to Him and our neighbors, we do what we want, we take what we want.  We sin and sin.  And then, when God sends one of His servants to call us back from our sin, a pastor or one of our brothers and sisters in Christ, we refuse and reject them.  We may not physically beat them or kill them like the tenants in the parable, but we become angry with them, which our Lord has said is the same thing as murder (Matt 5:21-22).  And for this, we deserve nothing less than to be treated like the tenant farmers.  We deserve to be destroyed.  And yet, because of God’s unexplainable mercy, He sent His Son to be destroyed in your place.

God gave His beloved Son to die on the cross, to receive the just punishment of your sin.  God sent His Son to be the cornerstone and foundation of our salvation so that you could receive forgiveness and everlasting life.  God promises this to all who receive His beloved Son with faith.  God wants to give this inheritance to you.

St. Paul says, “You have received the Spirit of adoption as sons, by whom we cry, ‘Abba! Father!’  The Spirit himself bears witness with our spirit that we are children of God, and if children, then heirs--heirs of God and fellow heirs with Christ” (Rm 8:15b-17b).  Baptized in Christ, you receive the Son for your salvation.  With the gift of faith, you know Christ your Lord.  You know Him as the cornerstone of your salvation.  And with this faith you receive His inheritance.  You receive the forgiveness of sins.  You receive everlasting life.  You receive salvation.

The tenants were foolish thinking they would get the inheritance after killing his son.  If they would’ve received the son and honored him, everything would’ve been good.  But because of their rejection, they threw it all away.  Don’t be like these tenants.  Don’t give up the gift for the dead-

end of demand or works.  Rejoice in Christ and rejoice in His inheritance.  Repent of your sin.  Build upon Christ the cornerstone of your salvation, and live in Him now and live for His everlasting life to come.  In Jesus’ name...Amen.
Posted by Pastor Peters at 6:00 AM