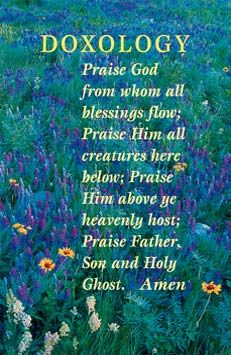 Now back for a month or so from the 67th Convention of the Lutheran Church Missouri Synod, I noted something that had a tinge of sadness to it – something that should have been an occasion for joy.  As is probably customary with many church bodies who have church-wide assembles of one sort or another, from time to time the assembly is called to ring and sing.  In the end the hymn we chose to sing was only one, one not German or Norwegian, or Slovak but English.  The hymn is the Common Doxology sung to Old 100th.

This is not a particularly Lutheran hymn (well, really only one stanza) nor does it flow out of the ethnic heritage of the many Lutheran homelands.  It is a generic Christian hymn (hence the word common – although its tune has some variety to confuse us and some have raised an issue about how modern or not the language is (to reflect such concerns as feminism as well as varieties of gender identity).

What saddens me is not the hymn (who could be sad about that) but about the fact that a room full of Lutherans cannot be counted upon to know more than this most common hymn and only one stanza at that.  There was a time when we could have been asked to sing any one of dozens of hymns from our hymnal and heritage and it would have been met with a resounding response among people who knew the text and tune by heart.  Now, not even the battle hymn of the Reformation, A Mighty Fortress, is known broadly enough or well enough to be sung without text and music.  Do you sense that there is something wrong with this picture?  It hit me like a ton of bricks.  We Lutherans no longer know our hymns well enough to sing the many great and wonderful hymns of our history and heritage – at least not without words and a melody to prompt us.

We do not sing from a common hymnal the same sturdy hymns of old often enough or outside of Sunday morning enough to know our own heritage.  We might be able to sing a stanza or two of Amazing Grace without words or music but we no longer know Luther’s great catechism hymns or the royalty of chorales (Wake, Awake for Night Is Flying and O Morning Star, How Fair and Bright), nor any other of the hymns of the faith ancient or modern.  We do not sing as many hymns or as many stanzas of those hymns and we do not sing hymns at home as we once did.  So the decision was made to go with what people know and it appears they know the Common Doxology best of all.
So I would plead with us to relearn our heritage, refresh our voices in the great hymns of old, and make these historic hymns our own again – not simply for the sake of some variety in convention singing but for the sake of our children and ourselves.
Posted by Pastor Peters at 6:00 AM

This makes me sad too. We don’t sing many Lutheran hymns in my congregation either, not for my lack of trying. It always strikes me as odd that they are willing to try and learn some Getty hymn, but the old hymns are just too hard. Actually, maybe it isn’t odd at all. Maybe they just don’t want the the beautiful Lutheran hymns that sing of Jesus anymore.

I am surprised, but not too surprised. In my LCMS, we still sing from the Lutheran hymnals. Our organist knows the music, but he is an elderly man, and one wonders if this will continue when he passes on. I believe there is a shortage of organists familiar with the older hymns everywhere in the LCMS. If that is the case, you will hear even fewer of the old hymns in the coming years. But we cannot be discouraged about this. The main thing is to continue congregational singing using the best hymns of praise in the LSB, and some, but not all newer hymns and songs are still very good. It is about worshiping the Lord, not about trying to relive the past which is now gone. We cannot change some things in life. We must move forward.

My wife yells at me when I sing "Ein feste Burg" on reformation sunday or
"Nun danket alle Gott" whenever the congregation sings "Now thank we all our God" or some others. I learned them from "Kirchengesangbuch für Evangelisch Luterische Gemeinden when I used to take my grandmother to Deutsche Gottesdienst.

"Now back for a month or so from the 67th Convention of the Lutheran Church Missouri Synod, I noted something that had a tinge of sadness to it..."

Did you also notice, with or without a tinge of sadness, the attire worn by some of the convention delegates? The Convention's FAQ stated "Business casual dress is appropriate while attending the convention during the day. Comfortable shoes are suggested. The convention hall may be cool so please consider bringing a sweater or light jacket."

It would help if we just left the words alone. The great Nicolai hymns you mention, for instance. Many of us can still sing How Lovely Shines the Morning Star, but stumble and need the hymnal for O Morning Star, How Fair and Bright.

Just a word of thanks from a Lutheran of Slovak ancestry for your mention of Slovaks among the national groups represented in the LCMS.

Regarding the part that Slovaks played in Lutheranism in America, it is interesting to note that, to this day, the LMCS and the ELCA both have non-geographic districts composed of former Slovak-speaking congregations. The LCMS Slovak-language district, the SELC, produced prominent Lutherans such as scholar Jaroslav Pelikan and hymn writer Jaroslav Vajda.