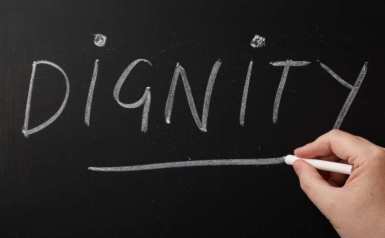 We live at a time in which many are openly parading once hidden desires in the pursuit of dignity and respect.  All around us people are crying out for their desires to be judged normal in the hopes that this will contribute to their own self-respect and grant value and worth to their lives.  It does not matter whether gay or straight or somewhere in between, much of this has been focused upon sexual desire and in the normalization of all kinds of desire -- as if the judgment normal will reap peace within and direct the pursuit of virtue and nobility.  Instead of seeing the fruits of this displayed in greater dignity, life has suffered greater assaults than ever and our culture remains more fragmented and our people more isolated than any other moment in modern history.

The modern mind sees itself as scientific and pursues data without the excess baggage of morality.  This objective pursuit has been exemplified in the Supreme Court and its finding of rights of privacy to justify the most public living out of desire devoid of moral judgment or the impediment of law or the hint of shame.  But we cannot blame them for doing what the rest of our culture has been doing for sometime.  What happens behind closed doors is no longer behind closed doors.  We have used the internet to foster and further the prurient interests of our hearts and pornography has become mainstream and normal.  We have turned social media into a public dare in which the most vulgar and base conversations and desires are front and center (unless, of course, they violate the interests of political correctness).  We have no shame left except the artificial shame of those who police our conversations to make sure the causes of the day have their rightful place up front.

The sexual revolution has not done all that much to free us from anything but restraint.  In fact, it has set free the once hidden desires and interests so that they may not only be pursued and lived out openly but flaunted.  Pride month has become less about human rights once routinely denied to gay, lesbian, and transgender but a direct challenge to the majority of heterosexuality and marital fidelity.  There is not a desire to make marriage and family open to those of different sexual orientations but to transform marriage and family until it no longer resembles what it was for nearly all of history prior to this modern challenge and redefinition.  The technology that has been invented during this revolution has not been used to improve the quality of life but to eradicate responsibility from sexual freedom and to blindly pursue the illusive dream of sex without love, without the potential for children, without the curse of disease, and without any responsibility except to a decision made in the moment.

Our conversation is increasingly vulgar as we have become immune to the shock of once forbidden words.  The more vulgar and base our conversation becomes does little to improve our communication and without shock or shame there is not much we have left to mark how serious we are about the content of which we speak.  It is like typing in all capital letters -- the shouting only increases noise and does not improve our ability to speak clearly to one another or to hear each other and understand what is being said.

The idea was that without shame, only dignity would be left but the end result was not dignity at all.  When we no longer feel shock or shame at ourselves or others, life is not more valued but worth less.  When the only regret we feel is not being true to our unrestrained desires, we are only more isolated and more debased.  We may not understand this but God surely does.  From the voice of the Law and the commandments with their imposing thou shalt not to the call to repentance and renewal in which virtue means self-control and forgiveness is heard along with the warning to go and sin no more, God is at work to restore the dignity once surrendered willingly in Eden.  In the end, what the Church has to offer the world is not simply the no that refuses to normalize and approve of wrong but also the deep and profound yes by which God remakes us as His own so that we might live under Him in His kingdom now and forevermore.
Posted by Pastor Peters at 6:00 AM

Thank you, Pastor, for these inspiring words: the words of scripture.
Here in Kingsport we are bracing for a Sept 7 Gay Pride Parade. The "Tri-Pride Parade" ("Tri" being Kingsport, Johnson City and Bristol) is being sponsored, in part, by Tennessee Eastman, one of the largest employers in the state of Tennessee and a major power here in East Tennessee. Tri-Pride's website is very well done and our response will have to be well done.
I will pass on your words to the faithful. We will need all the encouragement we can get
Please continue to prayer for us Christians and for our city, that our response may be in love and faithful to Scripture.
If you take "God" out of "Good" all you have left is "zero" will be one of our posters.
Timothy Carter, simple country Deacon.