Living in a world of zombie churches. . . 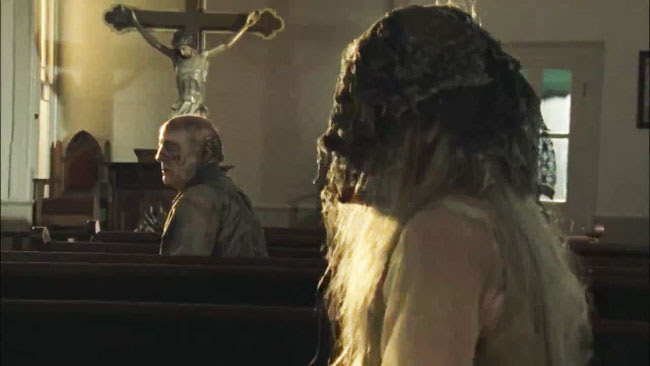 According to St. John, Jesus said If you continue in My Word, you are truly My disciples and you shall know the truth and the truth shall set you free.  He also said, according to the same evangelist, the words that I speak unto you, they are spirit, and they are life.  In other words, apart from Christ and His Word, we remain dead in trespasses and sin and unable to save ourselves.  That is true of individual people but it is also true of churches.  Those churches that have abandoned the Word of Christ have cut themselves off of the source of their life and freedom and left them captive to death.  They are, as some have described, zombie churches.

Let me give you an example of a zombie church.  The Episcopal Church has not only given people the option of apostasy but has provided teeth to make sure that apostasy is the law of the day in their churches.  When a bishop resists even part of the over all agenda (in this case Bishop Love and the GLBTQ agenda), the presiding bishop overrules him.  In the face of such obvious interference, does even one other bishop of TEC come to his aid or challenge the actions of the Presiding Bishop?  You know the answer.  He and his diocese is running out of money and time.  Now, in case some of you say he and his churches ought to leave The Episcopal Church, remember that TEC has the biggest and best legal team in the world to make sure that the people who leave, leave empty handed.  Their church buildings and all the other assets of those congregations remain with the TEC.  And where would they go?  To the Anglican Church of North America?  It is a fledgling denomination with its own problems and the best it can offer is to be The Episcopal Church not including its embrace of the GLBTQ agenda -- but everything else remains as it was and is.  This is the church body that found it impossible to challenge those who denied the basic tenets of the creed (as did Bishops Spong and Pike).  So the zombie church is dead, having abandoned the Word of the Lord and put in its place reason, culture, desire, and truth only one person wide and deep.  And like zombies, this zombie church eats the living.  It consumes all who remain therein.

Another zombie church.  The Evangelical Church in America is but steps behind its communion partner.  Within the ELCA it seems the prime qualification for being a bishop is not confessing the faith that is yesterday, today, and forever the same but embracing the current causes that have become the definition of what the ELCA stands for (namely, skepticism about the truthfulness of the Scriptures and confidence in the sexual ethics of the moment in which there is no right or wrong except to deny the right of the individual to chose or decide who they are.  Within the ELCA there is plenty of room for those who, like Ebenezer Lutheran in San Francisco, mix goddess worship with Christianity.  In the ELCA it is okay to use crystals, animal masks, Reiki healing, Kundali Yoga, and goddess idol-making in their liturgies and to name God as “Womb,” “Kundalini,” “Sophia,” and “Midwife” to worship God (according to their website).  But there is increasingly less and less room for those who believe the Word of the Lord, who desire to practice according to that Word, and to pay attention to the Lutheran Confessions.  It may not be a zombie church in every diocese but it is clear where this church body is headed.

The list of zombie churches or those very near to becoming zombie churches could easily go on.  You can see for yourself the kinds of churches I am speaking about.  A zombie church does not abandon the creed or the historic liturgy or even reading Scripture.  It simply does not believe what it confesses or trust the ordo or hear the Word.  So, like the movie zombies, it looks alive while it is dead inside.  It cannot offer anything to those who come to it but death.  I am not making this judgment but these churches have made their abandonment of the Word of God public and proudly so.  They continue to use ancient terms (like Gospel) but redefine them away from Christ crucified and risen and toward a generic concept of love that has no judgment or boundaries but accepts and approves every individual conscience.  It is not its own authority, for this Word has only one purpose in these churches.  That gospel exists only to commend to the individual whatever the individual's conscience and heart desire.

My advice?  Forget the buildings and bank accounts and flee from such zombie churches.  And if your denomination is heading there, fight to keep the focus upon the Word of God.  None of us is immune.  Not Rome, not Wittenberg, and not Geneva.  We are all susceptible to the disease of death that robs the Word of God of its truth and power.  It is the new battle for the Bible.  It may look the same as the old one in which the Scriptures were challenged by those whose methods of interpretation undermined the historicity of the text itself but it is not the same.  It is far worse.  We may think that what we need is to make sure we confess the Word of God to be true but we need more than this.

Encyclopaedias are also true -- filled with truths that remain true but make no difference in the lives of people because this truth is not efficacious.  We must do more than simply fight against those who undermine the truth of God's Word.  We must contend for the Word of God that is power -- an efficacious Word that does what it says and delivers that of which it speaks.  We must contend for the Word of God as the living voice of God who speaks still the unchanging truth to a new generation.  We don't need a Bible that sits on a shelf -- true but impotent.  We need the Scriptures to be the voice and power that calls, gathers, enlightens, and sanctifies the Church, the vehicle of the Spirit through which the guilty are forgiven, the lost are found, the sinners are declared righteous, and the dead are raised.  We need leaders who will challenge us to be captive to that Word and to delight in what it says and does.  We need pastors who will speak without fear this Word of Life in season and out.  For where this Word speaks and the Spirit opens our ears to hear, there is no more death -- only life in Christ!
Posted by Pastor Peters at 6:00 AM

Pastor Peters spoke of an ECUSA diocese in conflict with the national church, and ask, "where would they go? ACNA?" No, ACNA is not an answer, but cause they are as badly infected with apostasy as is ECUSA. They stayed in ECUSA too long, and brought the bug out with them.

The answer has been available since 1979. They should go to one of the Continuing Anglican groups. Yes, these are small and struggling, but they are also true and alive. There is no reason to abandon Anglicanism just because heresy has overtaken ECUSA. Leave ECUSA, but not traditional Anglicanism.

It is clear that the liberal mainline protestant "churches" are in fact in a state of rank apostasy. Not "false doctrine" not "heterodox" not "heretical" but apostate.

The rot has taken hold from the top down. Their institutions and seminaries are replete now with people who can not even say they actually believe what the Church confesses in the ecumenical creeds.

And, of course, in the ELCA the doctrinal assertions in the Lutheran Confession are viewed now as beliefs of a bygone era.

I no longer even can be confident that when I hear them use the word "God" they are doing so confessing the Holy Trinity and rejecting any other beliefs as contrary to the orthodox faith.