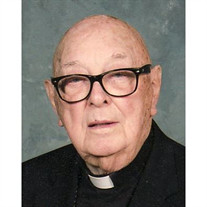 While standing in the exhibit hall talking with an old friend and his family, it was mentioned that his wife was the granddaughter of Bill Wild.  Pastor William Wild was the Pastor of St. John German Evangelical Lutheran Church in Yonkers, NY, for many years.  He was bold and robust with an unmistakable German accent to his English.  He died at the age of 100, Thursday March 20, 2014, in New Britain. Born in Germany, Pastor Wild is a graduate of the Concordia Theological Seminary in Springfield, Illinois, and served several congregations in New York, and St. Matthew's Lutheran Church in New Britain, CT, from 1963 to 1967.

It had been so many year since I thought about Bill Wild.  I well recall driving down to St. John when I was first elected to a position in the Atlantic District and installation had been farmed out across the District.  That year Bill Wild hosted the service.  He was a gregarious individual and filled with hospitality for those who had the occasion to visit.  I was there when he retired in 1999.  Perhaps there was nothing particularly notable about Bill or his long life except that he was a faithful pastor.  The congregation which I associate with him is no longer here.  The building dated to 1874 as St. John's German Evangelical Lutheran Church in a day when the German American community was robust and its demolition is one reflection that the remaining vestiges of this community are also now gone.

Howard J. Lincks was another such individual.  Pastor of St. Matthew Lutheran Church on State Street in Hudson, NY (now remodeled into an expensive home), Howard Lincks was never the pastor of a large parish nor was he ever associated with a very successful one (at least by the standards of size and money).  His legacy lies in being ordinary.  He was simply a good and faithful pastor.  I have in my office a gift he gave to me.  It is a Christus Rex, carved in Oberammergau, Germany, in the years shortly after WW II.  He was there and purchased the good sized crucifix and had it shipped to America.  I still have the wooden box with the custom stamps on the outside and the German straw on the inside.  It may have some value but it is precious to me as I enter and leave my office day and see it as a reminder it is all about Jesus Christ. I think of Howard almost every day.  I am glad to have thought about Bill again after so many years.

It reminds me that pastoral formation is not simply the domain of the Seminary or vicarage.  Pastors are being formed long after the hands are laid and a stole is placed on them.  This formation happens through people of influence.  Surprisingly, they are not always the large figures whose names are well remembered but individuals close to being forgotten as the days pass.  I think of people like Bill Wild and Howard Lincks.  The list could go on and on.  I am not the product of a seminary as much as I am the product of faithful pastors whose impact upon me shaped my understanding of the faith itself and who a pastor is and what he does.  I am still being impacted and shaped now close to 40 years after ordination day.  Nobody begins their life as a fully formed pastor no matter how many folks call him by that title.  So today as I recall Bill and Howard and think of the many others whose life and conversation have had profound effect upon me, I give thanks to God.  If you are a pastor like me, I pray God will give you many Bills and Howards to form you along the way also.
Posted by Pastor Peters at 6:00 AM

Pastor Peters, did Pastor Wild have a son, Jim, who went to system schools?