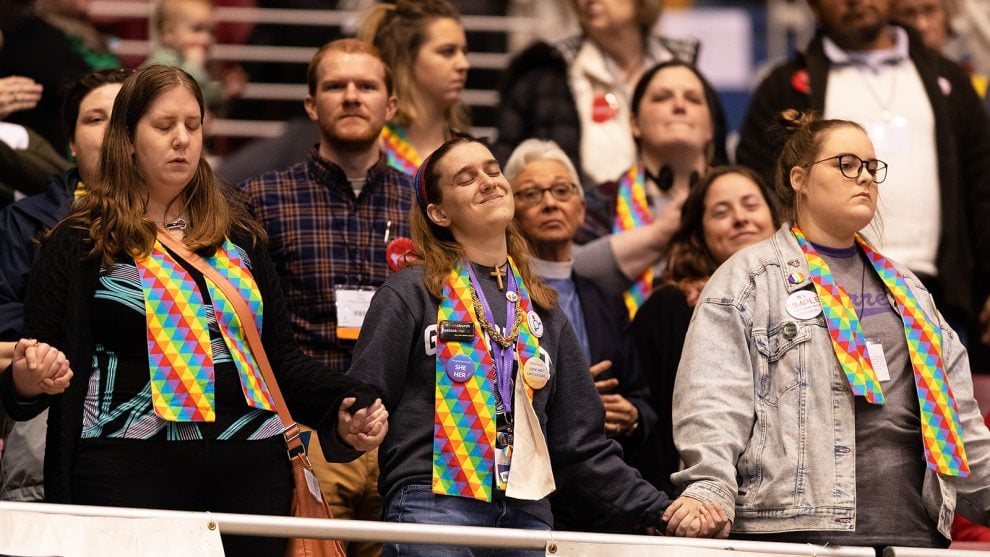 According to reports, the 2020 General Conference of the United Methodist Church meeting in  Minneapolis will consider how to structure what is hoped to be an amicable and orderly breakup of the second largest Protestant church in America.  But of course, the breakup is not news since the Methodists have been anything but united when it comes to how to deal with the LBGTQ+ issues.  of what church leaders hope can be an amicable, and orderly, breakup of a worldwide church that is the second largest Protestant denomination in the United States. When the conference earlier this year failed to remove language barring LBGTQ+ from ordination or marriage, it was a pivotal vote that signaled the beginning of the end.  When in February the General Conference gave approval to the so-called Traditional Plan, the progressives refused to live with the decision (which is exactly the position the conservatives would have taken).  That left little in the future but schism.  The only question would be who would act first and whether or not the division would be friendly or rancorous.  In any case, the result of the February conference left a chaotic situation in which people who could not change the vote at the meeting would vote with the money.

It is an interesting end to a history of unity, merger, and reconciliation among Protestants.  The history of Methodism has contributed much toward the liberal goal of reducing the number of denominations by finding ways to forge a unity that would cover the diversity hidden under the surface.  What is most interesting, however, is that the doctrinal cracks were held together rather successfully (though Methodism itself was bleeding off members for decades) -- at least until the sexuality issues forced a choice.  That only goes to show how deep and profound the sexuality issues were dividing American churches.  In the end, those who have embraced the LBGTQ+ agenda have won control of the denomination but a denomination a hollow shell of its former self.  An example is, of course, the Evangelical Lutheran Church in America which has bled off two church bodies and more members than the second largest Lutheran body in America ever had.  In the end, the ELCA was left to insist that it was a significant church, whatever that meant, as a consolation prize for its empty pews and church buildings.  It goes without saying that Methodism will find the same temptation to ignore the declining numbers and insist that it is significant simply because it says so.

Yet you have to wonder what the Lord of the Church thinks as He watches churches relativize their own confession and the Biblical witness in order to fit their truth to the trendy moment.  And it also goes without saying that this is not surely the end of the apostasy and heresy.  Just how far will churches go in their pursuit of perceived relevance?  I fear we have not seen the end of it -- not for Methodists or for Lutherans, for that matter.  And the future does not look promising for a Christianity that has exchanged the Gospel of Christ crucified for a gender of the day and a truth that feels good for the moment.

Yes, Pastor, it is a scourge to all of us.