Who would do that? 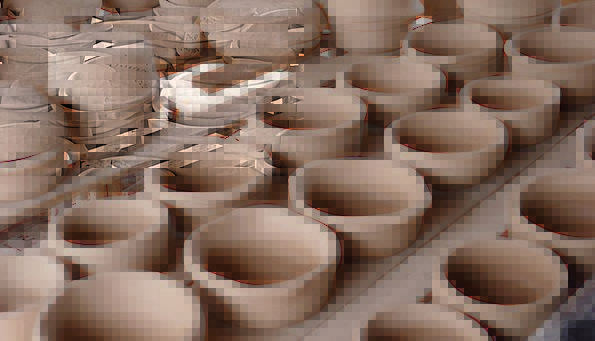 I recall an old movie in which the lead character's wife died after years of suffering with dementia.  Her husband was cleaning out a bookshelf and tossing out the books (a terrible thing to do, however) when a book fell and money flew out of the open pages.  He began going through book after book until he found a huge stash of cash his wife had hidden in the books.  Who would hide money in books?  Probably more people than you would think.  People are funny about hiding things where you would least expect to find them.

When I arrived in my first parish, the offering counters were a faithful husband and wife.  They would count the offering and then wrap up the bank bag in their dirty laundry and hide it in the washing machine before depositing the money on Monday morning.  Their reasoning was what kind of thief would rummage through their dirty undies in pursuit of valuables?  I am not sure I want to know the answer to that question.

St. Paul put it differently.  We have this treasure in earthenware vessels.  God is placing His most precious gift in clay pots so fragile and ordinary that it begs the question --- who would do that?  None of us would.  Most folks put their valuables in safes or lock boxes and then look for hiding places for those containers.  Most folks showcase their valuable collections or display in cases the things they count as special.  Who would hide something valuable in something not much better than trash?  God would.

God has a history of doing this.  He placed the bloodline of His Son in a weak people prone to wander from Him.  He spoke His Word through prophets who were seldom up to the task and some of them ran away rather than do the Lord's bidding.  He set the Ark of the Covenant in a tent until David and Solomon bugged him into better digs for the sign of His presence and power.  His Son comes to us in flesh and blood -- yes, the same fragile flesh and blood we wear and just like us except for sin.  His redemptive work and triumph came in the last gasp of life willingly offered in death upon the cross -- the very appearance of defeat and loss.  He instituted ordinary water to be the tomb in which the dead face their death in Christ and the womb in which they are given new birth by the Spirit.  He offers us the flesh of Christ in bread and the blood of Christ in wine set apart by His Word.  Yup, God has a history of hiding His great treasure in unworthy vessels.  Should we be any different?

Not many of you were noble or somebodies in this world, we are reminded.  Not many, indeed.  We are miserable failures even at sin.  We sin like cowards, run from admitting we are sinners, and want to keep as secrets our faults and failings.  But we are hiding nothing from him and little from those around us.  We are broken and stained and empty shells.  We are chipped and cracked vessels.  We are earthenware pots that leak and are worthless.  But God has given us His one and only Son, saved us by His gracious work, counted us righteous in Him, and promised us a future beyond imagination.  We are nobodies whom God has made somebodies in Christ.

We don't get grace.  We get the Law.  We understand business, trading one thing for another.  We do not get grace lavished upon the unworthy and undeserving.  None of us except the Pharisees were worth saving and Jesus insisted He had not come to pat anyone on the back so even the Pharisees could not be saved by merits.  Yet it is the Lord's great property always to have mercy -- mercy that confounds and confuses.  Lavish and extravagant grace that overflows our cups.  That is why we must be in the Lord's House faithfully.  On our own grace will always give way to works.  Christ must reclaim us with grace week after week.  There in the scandal of bread not even real bread and wine of forgettable vintage is the most precious food ever eaten or sipped.  And the people doing the eating and drinking as sinners who know their sins and yet the Lord has removed their sin as far as the east is from the west, cleansed us in the bath of Christ's blood, and set us apart to be declared a holy and righteous people.  Go figure.  None of us would do this.  But God did and does.  Thanks be to God.
Posted by Pastor Peters at 6:00 AM