Once again my old friend Pr Will Weedon has hit it on the head with an off the cuff comment.  When asked about the crucifix and being told that the empty cross was more common (comfortable), he said that last time he checked people still had a baby in the manger of their Nativity scenes.  Ah, yes.  The problem.  The problem is not with the figure of Christ but with its significance.  The issue with the body of Christ on the cross has less to do with the corpus but sin that required a death to pay its debt and freedom which is not free at all but cost Jesus His everything in suffering and death upon the cross.  As someone else once noted, little things have a habit of snuffing out big problems.  Yes, they do!

We are determined to know nothing but Christ and Him crucified.  This is the preaching and teaching of the Church of the Augsburg Confession.  We do not wish sin away or work ourselves out of its hole but acknowledge that sin is a big deal and the only thing that can overcome our sin is the bigger deal of Christ's blood shed, His agony and suffering upon the cross, and His death.  This is what the crucifix zeros in on and what makes it so uncomfortable.  It is not about art or about a denial or minimizing of the resurrection.  It is about our continued temptation to minimize sin or to forget what it cost Jesus to set us free from its power and its destiny of death.

Sometimes we are reminded of Romans 4:25:  [Christ] who was delivered up for our trespasses and raised for our justification.  But the translations have blurred what St. Paul is saying.  The resurrection does not accomplish our justification.  That happened upon the cross.  What St. Paul is saying is slightly different that we usually read it.  He was delivered up to the cross on account of our our sins.  The cross and its pain were required by sin to accomplish our justification.  Christ was raised on account of our justification, that is, to proclaim the justification complete and that His suffering and death upon the cross had paid in full and satisfied completely all that was required for that justification.  His resurrection proclaims it done.  In this way the resurrection justifies or vindicates Jesus who promised that on the third day He would rise.  He was raised so that we might see what His sufferings have accomplished and even now He lives to intercede with His blood on behalf of sinners.

The empty cross is visual testimony of the truth to H. Richard Niebuhr's statement of our rose colored glasses about sin and about God's wrath: “A God without wrath brought men without sin into a Kingdom without judgment through the ministrations of a Christ without a Cross.”  Our problem is not with the portrayal of Christ in His suffering but with the idea that He needed to suffer for us or that our sins were so great that they could not be fixed with a little tinkering rather than the radical of His innocent suffering and death for each of us guilty.

Christmas offers us no problem in this regard.  In fact, we cannot but see the baby still in the manger 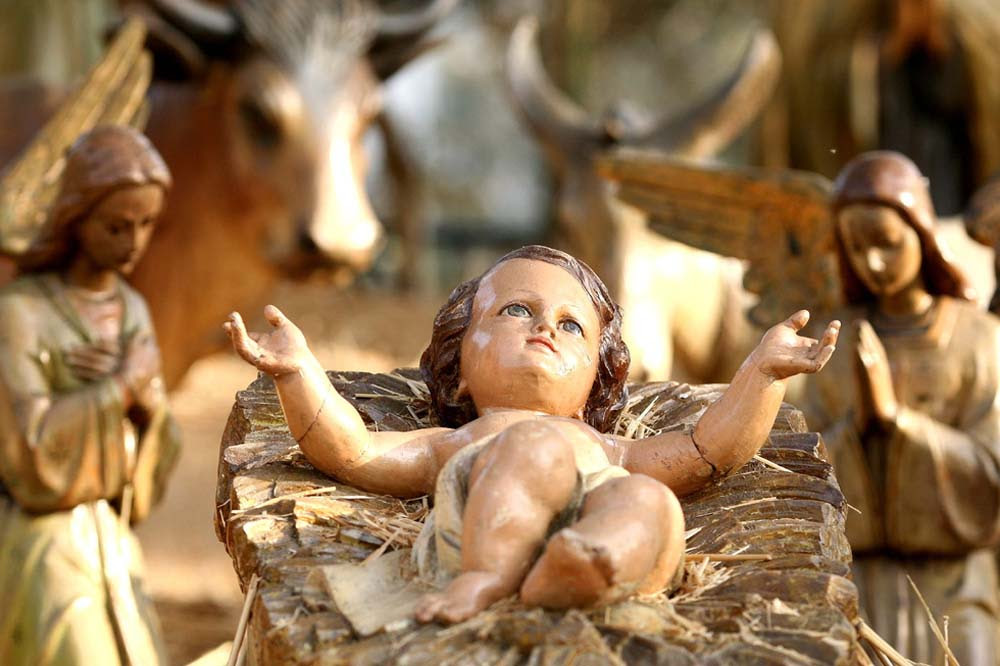 because it pulls at our heart strings and touches our tears with sentiment.  Yet the reason the baby is in the manger is not because the optics are nice but because the Incarnation makes possible the Justification.  We have real problems with the Incarnation of Our Lord and yet we can set them aside because we like the visual imagery of the baby.  But the shock and scandal of God in the womb of the Blessed Virgin, delivered amid the pain of her cries, and crying out as any child born of woman is blunted by this sentiment.  Sort of like the way Lutherans who object to the word mass used to refer to the Divine Service still refer to the day as Christmass.  We have so distanced one from the other that we do not notice.  This you cannot do with the figure of Christ upon the cross, clearly in the agony of suffering and the throws of death!

No cross in the world ever meant "resurrection." The cross has always meant death. Period.

@Anonymous said: "The empty cross is known as the resurrection cross." No, you are absolutely and totally wrong. There is nothing about the cross that signifies the resurrection. Everyone executed on a cross left it standing and empty. You should seriously do your homework before spouting off more crap like this.

There is no such thing as a "resurrection cross" and if you actually believe that, well, let me put it bluntly: you are an idiot.

Real classy guy in previous post. He calls someone an idiot
who was told by his pastor about the resurrection cross. You
might want to clean up the "crap" out of your garbage mouth

This is another issue dreamt by bloggers that has no relation to real life. Honestly, do you really think that viewing an empty cross - not even a real cross, mind you - causes people to minimize the seriousness of their sins? Must I drive spikes through my hands and feet also to get the full effect? Is the word of the law not enough to convict? Is preaching of Christ crucified so poor that I cannot understand without a corpse on a cross?

If the Lutherans would stop divorcing crucifixion and Resurrection and stop treating them as individual events where one accomplished x, the other accomplished y, then maybe, just maybe you wouldn't get your collective panties in a wad over empty cross vs. crucifix.

“Many people, even ministers, hardly know what to make of the resurrection of Christ. They read in some passages that Christ rose from the dead, and then again, that the Father raised Him from the dead, and they do not know how to harmonize these statements. So they say, on the one hand, that Christ rose from the dead to prove His deity, and again, He was raised from the dead in order that the possibility and certainty of our own resurrection might be demonstrated. Both of these statements are true, but both do not yet express what is most important. Christ certainly would not have died and risen from the dead merely to prove His deity, and the possibility of our own resurrection was already proved by the resurrection of persons prior to that of Christ. The chief thing regarding Christ’s resurrection is that God by raising Christ from the dead declared that our Lord has paid the debt of sin for the whole world and that the entire world is now delivered from its guilt. Therefore the whole world should rejoice in its victory, for both its freedom from sin and its righteousness have been secured. Again, when God raised His Son from the dead, He did not forgive Him His own sins. Christ was not absolved from His own guilt. But He was declared absolved from our guilt, which had been imputed to Him. Therefore the whole world has been justified by the resurrection of Christ.”
(F. Pieper, “Walther as Theologian”)

And you are without honor.

A Crucifix in our Churches makes people uncomfortable as it should. It is there to remind us that Christ paid the ultimate price for our redemption and also to remind us that Christianity is not a comfortable religion. You can't have the Resurrection without the Crucifixion. It should rattle our very being. A Christian life is challenging repleat with crosses to bear. It aint easy especially today. The Crucfix reminds us that Christ is with us during our trials. We are not alone. He knows our pain. HIs Grace is sufficient to carry our crosses and God would not give us a cross we couln't bear.