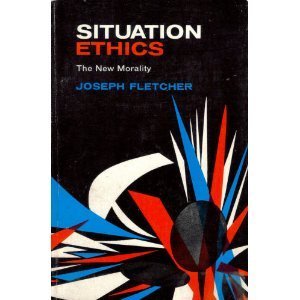 Though I encountered it long after it had hit the bookshelves igniting a firestorm of controversy when published in 1966, Joseph Fletcher's Situation Ethics was no less radical when I read it in 1974.  That is not how it was portrayed.  It was hailed as a welcome alternative to a world of concrete rights and wrongs that no longer seemed to fit the minds and wills of some folks.  It was seen as a sort of  reformation of morality, freeing choice from absolutes and acknowledging the circumstances of the moment to define the right choice.  Of course, it was much more than that.  It was the beginning of a new anarchy of feelings and desires that rules the choices of people.  Though defined as an ethic of loving concern, Fletcher was, in reality, overturning the common morality and raising questions about everything that had once been seen as right or wrong.  In his view everything from lying to premarital sex to adultery to murder could  be morally right.  It depended upon the circumstances and the mindset of the person making the choice.  The outcome was also a significant factor in the morality of a choice, sort of the end justifying the means.

Further, like Margaret Sanger and others hailed as voices of liberation in a world of moral absolutes, we find that Fletcher also had a dark side with respect to issues of life.  In Sanger's case it was the desire to rid the world of substandard people.  Fletcher also had the idea that it would be moral to relieve the living of the burdens of caring for the aged and infirm.  He did not quite stop there but implied that any means to rid the families of the burden of physically or genetically defective individuals was indeed moral.  “We ought to protect our families from the emotional and material burden of [genetically and congenitally] diseased individuals, and from the misery of their simply ‘existing’ (not living) in a nearby ‘warehouse’ or public institution.” – Joseph Fletcher

The reason I write this is because this was a standard college text when I was in school going on 50 years ago and at the time it seemed like a breath of fresh air.  In reality it was poisoned air that has been breathed in so long that it seems we no longer know what it means to smell what is good and right.  Whether my generation sensed an ally in this movement and used it to foster a wholesale change in our moral barometer or whether the present day is the fruit of seeds planted by such radical voices, the ethical and moral dimensions of what ails us as churches, as Christians, and as a culture are shocking.  In a couple of generations we have gone from having a common morality that once united us as a nation and which churches found theologically friendly to no common morality and to churches either out of step with the times or in lock step with the moment.  The tension that should have existed between the church and the world has infiltrated the churches to the point where it is nearly impossible to use the term Christian morality and have any real meaning to it.  And it does not matter much to Fletcher who later renounced his faith and became an atheist.  As big as the mess is, God will have the last word on Fletcher and our corroded moral compass, especially with respect to the value we place upon life in the womb and lives that we deem not worth living.
Posted by Pastor Peters at 6:00 AM