I want a wider reading of what my friend Dr. John Stephenson has put on the Gottesdienst Online website.  I copy what he has written without change.  I urge you to read it and to give the deepest consideration to its words.  We must carefully sift through what has been done and what has not been done in the Name of the Lord in the face of this pandemic.  And while I am at it, let me urge you to go ahead and bookmark the Gottesblog site and refer back to it often! 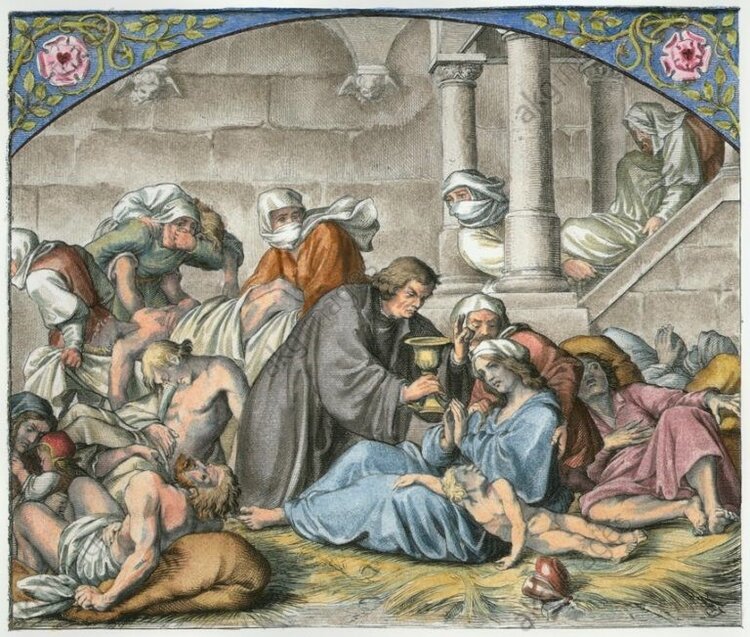 To my best knowledge, the Roman Catholic bishops of Canada have prohibited public worship, denying their people access to the Eucharist and other sacraments; south of the border the cardinal archbishop of Chicago is even reported as having forbidden the administration of emergency baptism without his express permission! Since when have even the highest-ranking bishops been authorised to subvert the clear and abiding mandates of Christ our Lord? Meanwhile, public worship has become a thing of the past in most of the parishes of Lutheran Church—Canada, with only a few pastors celebrating the Sacrament of the Altar in their churches for small groups, as is explicitly permitted by the public authorities. One brother in Ontario has celebrated the Eucharist seven times on one Sunday for registered groups of four communicants, and I rejoice that my ordained sons-in-law in Iowa are likewise engaging in multiple Sunday celebrations at their altars, in their cases being permitted to serve groups of ten, including themselves.

Our current situation of closed churches across the length and breadth of this vast continent, with liturgical celebrations for permitted minimum numbers few and far between, strikes me as eerily akin to the famous or rather infamous occasions when medieval popes placed entire kingdoms and other sovereign territories under Interdict in situations where the local ruler had defied the pope’s will. One thinks of Julius II placing the republic of Venice under interdict when its rulers resisted his invading armies by military means. When King John declined to accept Innocent III’s nomination of Stephen Langton to the see of Canterbury, the pope’s wrath entailed not only the excommunication of the king but also the severe restriction of access to the means of grace among his people:


“The interdict of 1208 decreed that no services were to be held in the parish churches. The Mass was allowed in monasteries—but only behind closed doors. Infants could not be baptized except at home or in the church porch; the dead could not be buried in consecrated ground; the living could not receive Holy Communion except at the point of death; church bells were silent” (David Edwards, Christian England: Its Story to the Reformation, 130).

The Great Interdict of 2020, whose end is not yet in sight and whose long-term consequences remain to be seen, appears to have come about through a combination of pressure on the part of the civil authorities and over-hasty compliance on the part of their ecclesiastical counterparts. Our swift retreat from public space and its concomitant overwhelming dropping of the Sacrament of the Altar from the life of the Church contrasts strikingly with the attitude taken by a minority among the church in Abitinae in North Africa at the time of the persecution unleashed by Emperor Domitian. On the verge of his surprise abdication, this ruler, who would rank among the greatest of the Caesars had he not unleashed massive persecution upon the Church, issued a decree on 24 February 303 ordering the churches across the empire to cease and desist from public worship and to hand over the Scriptures and the sacred vessels to the civil authorities. Bishop Fundanus of Abitinae succumbed to pressure, committed apostasy, and surrendered the Scriptures. A plucky minority of his flock remained within their baptismal grace and continued (clandestinely, they thought) to meet for the regular Sunday Eucharist under the leadership of the priest Saturninus. A group of 49 were caught as it were in flagrante delicto as they assembled for their chaste sacramental union with Christ, brought under arrest to Carthage, tortured, put on trial and swiftly executed on 12 February 304. Saturninus’ four children, including his infant son, stood steadfast in loyalty to Christ, sharing the martyr’s crown with their father. (Saturninus’ infant son tells against the thesis of Roman Catholics of the Ratzinger stamp who maintain that, while married men received ordination in the patristic Church, they were expected to live continently, no longer engaging in marital relations with their wives—but that’s a story for another day). When asked by the interrogating judge why they had defied Diocletian’s orders, one of the 49 martyrs of Abitinae gave a reply that rings through all subsequent centuries of the Church, delivering a powerful message not least to our own time and place: “Sine dominicis non possumus—Without the Eucharist/Divine Service we can’t get by.” Dominicis is the dative plural of the adjective dominicus-a-um, having the sense of “the things of the Lord.” Sometimes and not inaccurately translated as “Mass,” it has a wider meaning that, but certainly includes as a non-negotiable minimum the Eucharist. The prevailing attitude among professing Christians in North America and Western Europe at this time appears to be a lukewarm “Sine dominicis bene possumus—We can get by quite easily without the Eucharist.”

But, as we all stand before the searching gaze of Christ our Lord, can this alteration of the reply that sent the martyrs of Abitinae to their earthly doom stand the scrutiny of the One who has laid on us the unqualified mandate, expressed in the present infinitive τοῦτο ποιεῖτε/“This do”? This command is issued by a higher Sovereign than those earthly potentates who have police forces and all manner of earthly coercion at their disposal. Should they strip us of liberty, they can certainly impose a eucharistic fast on captive Christians, but if congregational members request the Blessed Sacrament at this time, their pastors would impose eucharistic famine upon them by not complying with their petitions. And if any were to maintain that the possibility of transmitting or receiving the coronavirus is a horror so dire that it precludes any manner of public worshipping assembly or eucharistic celebration, it might be pointed out that the nasty flu that originated in Wuhan, China, and that can prove deadly to certain susceptible groups, bears no comparison with the decades-long plague that ravaged Justinian’s empire in the 6th century or with the Black Death that reduced the population of Europe by a third in the middle of the 14th century. Should we be governed by fear of the coronavirus, public life would necessarily grind to a halt in almost all its dimensions for years to come, proving that the remedy of lockdown will turn out to be a worse fate than the disease it is supposed to withstand. Moreover, there is no strength in the argument that we should refrain from public sacramental participation until such time as the whole worshipping community can safely reassemble: the Lord said something about being present where two or three assemble in His name, and it looks to me as though He celebrated His Eucharist for a congregation of only two at the evening meal in Emmaus. The size of worshipping assemblies is a variable that the clergy are powerless to determine.

So should anyone from our neighbourhood ring my doorbell in these days in quest of pastoral care, would not my ordination vows oblige me to supply it, even if it involved coming into bodily contact with someone gravely ill with the infection that has ground the world to a halt? I know of no convincing argument to the contrary. And should a brother in office, fatigued at the need to celebrate the Eucharist seven times on a Sunday, ask me to divide these duties with him, would I have the right to refuse? As a sturdy 67 year-old in rude health, I think not. May the Lord cause us all to reflect on the testimony of the martyrs of Abitinae, take it to heart, and adopt it as our motto in this bleak hour: “Sine dominicis non possumus—Without the Eucharist/Divine Service we can’t get by.”
Posted by Pastor Peters at 6:00 AM

A rather windy, pedantic, Barzun-esque, Loeheist diatribe from a website that routinely mocks fellow Lutherans for contemporary worship practices. If I were a pre-Vatican II Roman Catholic, I might be inspired.

Luther indicates that in a time of plague, a minister must be in place so that the word is preached and sacrament received every week or other week. LCMS churches are providing the gospel online every week. If the sacrament cannot be administered for a month or two, so be it. Luther’s concern in his letter is principally for the provision of the sacrament for those who are dying.

One diplomatically-worded Gottesblog comment from an Italian poster caught my eye:

The churches' comfortable acceptance of the "non-essential service" label from the outset of the pandemics is problematic.

"Essential services” shall consist of everything listed by the U.S. Department of Homeland Security in its Guidance on the Essential Critical Infrastructure Workforce, Version 2.0, plus religious services conducted in churches, congregations, and houses of worship. [Emphasis added]

It seems that the Missouri Synod was very compliant in agreeing with Demonicrat governors to stamp the Bill of Rights as "Non-essential."

One minor point I saw in the blog is the frequent (16 times, not including the variation, "Kaiser") reference to "Caesar," particularly used by several people who are Canadian. Now Canadians are citizens of Canada, but they are also subjects of the Commonwealth Realm, with Elizabeth as their Queen.

We citizens of the United States are not subject to any person (including a queen) , since We the People ARE the government (i.e. Caesar), having ordained and established the U.S. Constitution as our form of government with elected and appointed representatives (though lately some of the gubernatorial representatives have been acting like they are a queen).