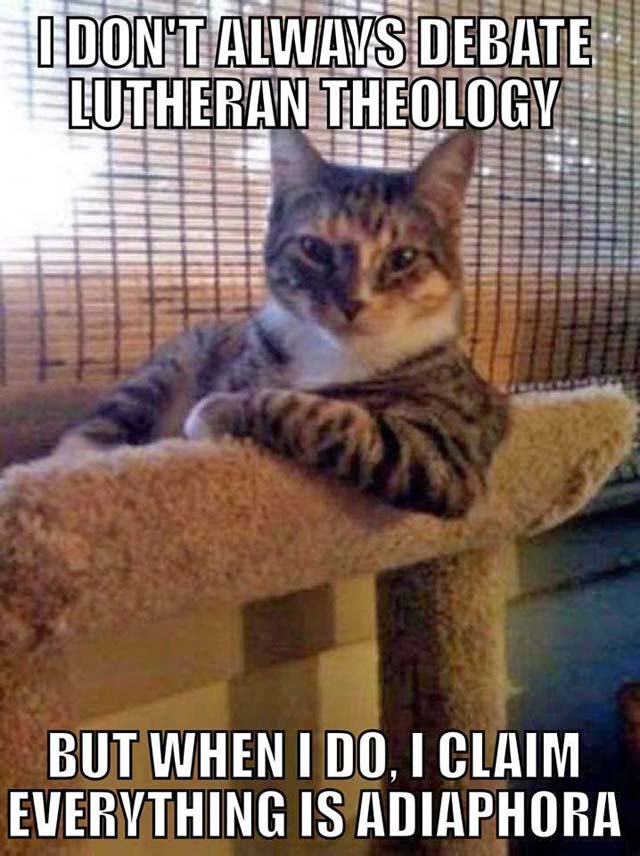 A while ago, in a Bible study on the Augsburg Confession, Article XV, I asked how many among the 70 or so in the room had heard of the word adiaphora. Only a few hands were raised. Even though not many know the word, they have been living in its glow for most of their lives. In the end only a couple ventured to define the term. Most of them echoed the modern explanation. Adiaphora means anything goes and nothing matters.

Lutherans are sometimes like liturgical children who fight rubrics, rituals, and rules like a 6 year old trying to avoid bedtime or the vegetables on his or her plate. We have become a church of no rules, where rubrics are more pink than red, and where rituals are automatically suspect. Even established liturgical congregations where ancient church usages have been restored must continually fight the battle of those who turn up their nose at what their Lutheran founders would have found entirely ordinary and usual.

Church usages is not a term we ordinarily use. It really includes church customs, traditions, rubrics, and ceremonies. The point to note is that in the Augsburg Confession these are not tainted with the negative view that is the default for many Lutherans today. Lutherans today tend to be instinctively liturgical minimalists. Lutherans today seem to have a Danish Modern or Mid-Century Modern approach to ritual, ceremony, and the rubrics of the service. Less is more. More is usually suspect. To some, it is excluded as being catholic -- note that this objection is not necessarily Roman Catholic but catholic.  Others are simply juvenile.  If we don't have to, we won't.

Our justification for all of this is that pesky word, adiaphora. It don't matter. But that is not at all what our Confession states. It does matter and the onus is on why something would be rejected and not why it would be kept. Everything without sin, profitable, in good order should be observed. Apparently this was still unsettled by the time of the Forumla of Concord. There the Lutherans felt it necessary to address the topic again. In the Formula of Concord the criteria for introducing or making changes in church usages or customs is further addressed.

“We further believe, teach, and confess that the church of God in every place and at every time has the right, authority, and power to change, to reduce, or to increase ceremonies according to its circumstances, as long as it does so without frivolity and offense, but in an orderly and appropriate way, as at any time may seem to be most profitable, beneficial, and salutary for good order, Christian discipline, evangelical decorum, and the edification of the church” (Formula of Concord, Solid Declaration, Article X, §9).

Note what this does. It removes from the individual pastor or the people in the pew the right to make these changes. This is not seen within the realm of personal preference of what somebody might find meaningful or not. Rather, this is an act of the church. Here it is not the church usages which might offend but the change, reduction, or addition of church ceremonies, rituals, rubrics, and liturgical rules (further note that addition does not mean restoration but the addition of those things NOT within the ordinary experience of the Church at the time (only a couple of generations after the death of Luther).

So what is my point? Adiaphora, whether you know the term or not, has become the cover for doing whatever you please on Sunday morning -- on both sides of the altar rail. Preference has been enshrined where it never was confessionally. And that is how we got where we are from where we began. Missouri is even more to blame for this with the way we have practiced congregationalism (though in reality our theology and constitution would insist that a congregation restricts its rights when it joins Synod by its promise to use only doctrinally pure hymnals and agendas AND thereby the rubrics of those books that govern our liturgical life). In the end, it is not a pretty sight when people open up a door to a Lutheran Church Missouri Synod congregation on Sunday morning and have no idea what they will find there.  Maybe when we get back to normal, we can reflect upon what we are getting back to and shaping that blessed reunion of the assembly not on how little we can do to get by but what is the fullness of our confessionally directed and liturgically oriented faith.

Bravo! Not only is the point made important, you also provide great confessional documentation.