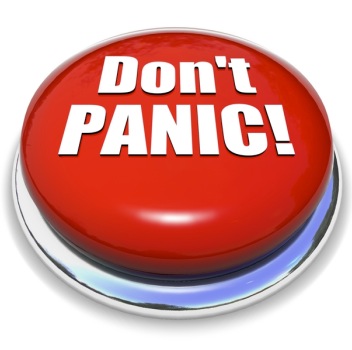 I have great respect for Peggy Noonan and yet she seems to have drunk the koolaid of hysteria in a recent column in which she complains about those who call for calm and, she insists, there is a need to panic.  She implies that all is fair when exploring how best to deal with all the possible threats that could be out there.  She believes that America must be prepared for everything—even the unimaginable.  Although she does worry about overreaction on the part of some, she believes that it would be possible to reign in the panic by officials at a later time.

The drumbeat of some is that there is a need for panic when the danger is great enough.  But is that true?  Or, as many believe, is panic always dangerous and always against the common interest and the common good?  I guess that is the point.  There have been those whose voices have seemed to echo the idea that panic is good and salutary and there have been others who insist that panic will not help -- not even in a pandemic.

I find it hard to fault those who have been slow to jump on the bandwagon of hysteria.  Surely, if we had any doubt about this, the hoarding of toilet paper is but one example of how panic works against the common good and in particular to harm the most vulnerable.  The example we have is not of a reasoned people being informed by reasonable media but the mass hysteria created by sensational news (if not from the legitimate media then from social media).  There are few voices of calm -- especially since the churches have acquiesced to the political leadership.  We have had mayors who threatened to shut down the churches that refused to comply with their orders and take away their property and we have had governors who seem to use guilt to keep their people within their borders.  It is no wonder that people load up their carts with the very things we should be sharing and the professional medical arms of our care are frustrated by short supply of what they need.  What good does it to to kill the patient in order to save him?  But that is exactly what might happen if, in order to deal with what might happen, we destroy everything we have.

We have been tossed to and fro upon a sea of what ifs.  We have been subjected to a sea of talking heads ranting about virus modeling and ventilators and hospital beds we do not have.  We have had politicians decide what businesses are essential (abortion clinics) and what are not (barbers) and most have decided that church is an optional social gathering to be easily stripped of any constitutional protections.  What might happen is most likely different from what will happen even when they may be similar.  We are not seeing the differences between the worst projected and the reality of what we have experienced so far.  Yet a nation and a society cannot live in the panic of what might happen without severe and lasting damage to the people and to the systems that order the lives and work.   Furthermore, panic is not a policy and panic is not a prudent means to getting people to observe ordinary precautions in this extraordinary time.  This is of particular interest for those whose roll has classically been to help maintain calm and prevent panic -- a role supremely suited to the Church!

When panic becomes our policy, the Church ought to speak of that which we know.  As hard as it is to hear, death is not something any of us can prevent.  We have our wishes and desires but the Church proclaims something more real than our wants or sentiments -- the actions of Him who has harnessed death and led His people through it to everlasting life.  If there is a voice whose calm can address a nation panicked by what might be, it is the voice of the Church that speaks of what has been -- what God has done!!  America needs such prayerful people, who have heard the wisdom of the ages incarnate in the Son of God, and who can address the prospect of death with the reality of everlasting life.  I am not sure that people are ready to hear but the Church must not wait until there is silence.  Now, in the midst of this crisis, good souls who have the discernment to see that a physical solution is not the only one needed need to step up and speak out.  For if there is to be a return to order, the Church needs to maintain a voice of calm in panic and address those who think panic is the only fitting response to what has happened around us.

Although it may sound like the Church is dismissing the dire straights of the situation at hand, she is doing nothing of the kind.  She is pointing the despair to the God of hope, directing the fearful to the God of peace, and giving to those willing to sacrifice everything for and end the gift of Him who already sacrificed everything for the nobler good of your salvation and mine.   Now is the time to point to the One who can give what technology, progress, and invention cannot -- a clear conscience, peace of mind, and consolation in the heart.  Instead of churches being arms and agents of the government and media crying panic, we must be true to the Lord of life and hope and address the hysteria with the message of the cross and empty tomb.
Posted by Pastor Peters at 6:00 AM