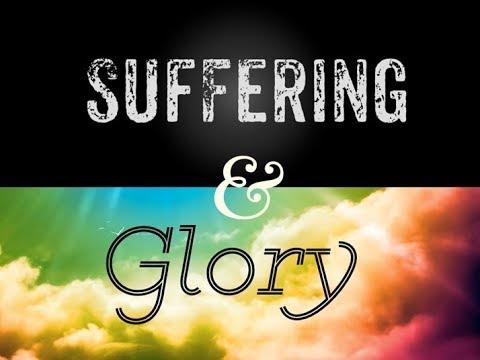 Alleluia!  Christ is risen!  He is risen indeed!  Alleluia!
We don’t like to suffer, and we don’t like looking at it either.  Suffering is weakness.  We want strength and glory.  Sure, athletes repeat the mantra “No pain, no gain” during tough workouts, but the suffering in training isn’t the point.  Winning the game is the point.  Glory in victory is the point.  But for Christ, His suffering is the point.  Jesus’ suffering IS HIS GLORY.  This is hard for us to accept.  We have a hard time looking at the cross and saying that is glory, but it is.
The Emmaus disciples had a hard time looking at the cross.  They hoped and believed that Jesus was going to be the Savior of Israel.  Based on all His mighty deeds and teachings, they were certain He was the Messiah.  Like Moses who led Israel out of slavery, Jesus would be the one who’d free them from Rome.  He was supposed to be a national hero.  But the cross changed that.  Jesus’ death shattered their hopes.  How could He be the Savior?  He died.  How could He free us from suffering, when He suffered?  Jesus’ suffering and death kept the Emmaus disciples from recognizing Him as the Redeemer.  They couldn’t see His glory through His suffering.
We also can’t see glory in suffering.  We think of suffering as a bad thing.  We say it’s better not to live at all than to live a life of suffering.  We’ll do just about anything to avoid suffering.  But we can’t escape it.  All of us suffer, because suffering is the result of sin.
Sometimes, it’s a direct result of our own sinful behavior.  There are serious and painful consequences to our sin.  Gossip damages relationships.  Adultery destroys families.   Coveting leaves us unsatisfied, always wanting more.
But not all suffering is a direct consequence of our own sins.  Sometimes our suffering is just a result of the damage sin has caused in the world.  People who suffer from cancer, diabetes, Alzheimer’s, COVID-19, or any other disease, aren’t suffering because they’re being punished for specific sins.  They’re suffering because sin has brought illness and death into the world.  Sin has turned the paradise of God’s creation into an abyss full of pain and in-escapable suffering.  But Jesus’ suffering changes that.
On the Emmaus road, Jesus rebuked His disciples.  He said, “O foolish ones…!  Was it not necessary that the Christ should suffer these things and enter into his glory?” (Lk 24:25-26).  This answer to this rhetorical question is, “Yes.”  It was necessary for Jesus to suffer these things because in His suffering He was entering His glory.
Christ’s glory is His suffering on the cross, because by it He redeems us, not from some foreign rule, but from our enemies of sin, death, and the devil.  On the cross Jesus took the sin of the world, He took your sin, upon Himself, and there He suffered the just consequence for it.  There, He redeemed you, He purchased and won you, not with silver and gold, but with His precious blood (1 Pt 1:18-19).
Jesus’ glory is His suffering.  What appeared to be defeat is His great victory.  The Emmaus disciples should’ve known this.  They knew what Scripture said about the promised Messiah.  They witnessed Jesus’ miracles and heard His teachings, fulfilling the Old Testament prophecies.  But when Jesus suffered and died, they abandoned their belief because they didn’t believe ALL of what the prophets said.
Scripture doesn’t only prophesy about Jesus’ mighty deeds, but also His suffering.  In Genesis 3:15, the very first proclamation of the Gospel, God cursed the serpent Satan saying, “I will put enmity between you and the woman and between your offspring and hers; he will crush your head, and you will strike his heel” (Gen 3:15, NIV).  In this promise, God said the Savior would defeat Satan; but, this victory wouldn’t come without suffering.  The prophet Isaiah, centuries before Christ’s birth, prophesied saying, “He was wounded for our transgressions; he was crushed for our iniquities; upon him was the chastisement that brought us peace, and with his stripes we are healed” (Is 53:5).  And not only did God verbally declare that the Savior had to suffer and die, but He also showed it.  The whole sacrificial system pointed to the sacrifice of the Perfect Lamb who’d pay for all sins.  John the Baptist pointed to Jesus, declaring Him to be that Lamb (Jn 1:29).
Jesus helped the Emmaus disciples recognize His suffering was His glory.    As Jesus bless and broke the bread, their eyes were opened, and they recognized their risen Lord.  They understood it was necessary for Christ to suffer for their salvation.  And the sadness they felt was replaced with happiness and joy.  They quickly went back to Jerusalem to tell rest of Jesus’ disciples.
Likewise, we don’t just stay inside these walls and keep the message of Jesus’ cross and glory to ourselves.  We go out and share it with family and friends, and sometimes even total strangers, because it is the source of our hope.
The cross was necessary and its purpose is the glory and joy to Jesus.  Jesus joyfully endured the shame and suffering of the cross to win you life and salvation. The glory of the cross is the payment for your sins so that you’d receive life in Christ.  This is the message we take comfort in when we suffer.  We recognize suffering is the just consequence of our sin, and when we suffer, we repent.  We turn to Christ, to His suffering, to His cross, to His glory, because through the cross, we have salvation and eternal life in the glories of heaven.
Alleluia!  Christ is risen!  He is risen indeed!  Alleluia!