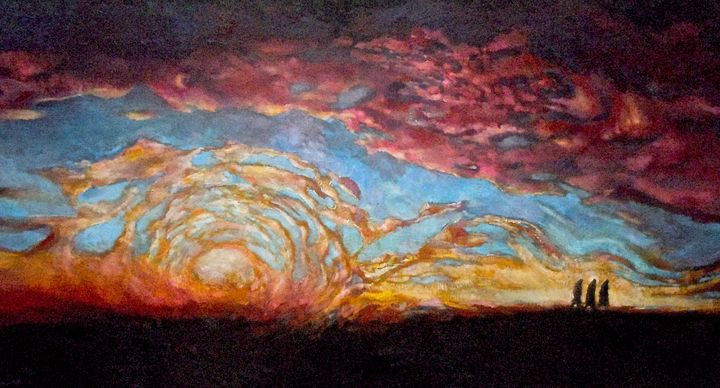 The news is filled with tragedies.  Every day we hear new stories of sadness, of senseless crimes, of natural disasters, and of manmade troubles.  They barely linger in our memories before the newest stories of calamities crowd out the old.  The news cycle may be shorter in our time but news has always come and gone.  The most recent catastrophe is the one people talk about.  And if it hits close to home, as this virus has, we continue to talk about it from the wounds of our own sorrow, loss, and disappointment.  If we were walking on the way to Emmaus, we would have been talking about the corona virus.

As it was, some travelers were walking from Jerusalem to Emmaus a few days after the crucifixion.  They were talking about everything that had happened. A stranger walked with them, listening but knowing nothing of the tragedy that was the object of their conversation.  One of them, Cleopus, was adamant: “Are you the only visitor to Jerusalem who does not know the things that happened there in these days?”  How could anyone not know!  Would it be any different if someone said to us corona what?

This was not simply about a news story.  These travelers had a stake in it all.  They did not know Jesus from reputation but heard Him preach and teach.  They had listened to Him with their hearts as well as their minds.  They were convinced that He had been a prophet, a mighty prophet of God, but in the senseless tragedy of His death came the end to the beginning of their hope.  Three days later and all they had were rumors.  But they seemed to agree that Jesus’ death had been a terrible waste, a sad tragedy, and disappointing end.

When Jesus was ready to reveal Himself to these travelers, He led them through Moses and the Prophets.  He showed them that His death was not a tragedy.  This was not the sad end of a great beginning but the very plan of God laid before the foundation of the world.  The Christ must suffer these things and die this terrible death not as an accident of fate but the divine drama through which a sinful and fallen world would be rescued and redeemed.  As with Thomas a week ago, Jesus did not announce His victory with signs and wonders but with the scars of His suffering and the Word of the Lord which gave context for this suffering, death, and resurrection.

They thought their hopes had been shattered by the reality of Christ’s death and by the uncertainty of what happened next. But Jesus insists His death is not a shame or a sham but the mighty means through which sin is answered, guilt is taken away, the devil is defeated, and death is brought to an end.  These disciples on the road to Emmaus were converted not by smoke and mirrors or mighty signs and wonders but the Word of God enfleshed and fulfilled in Christ.
What happens next ought to surprise you as well.  These travelers did not erupt in spontaneous praise, by dancing a victory dance, or by some ecstatic frenzy of joy.  No, indeed.  They continued to where they were going and begged Jesus to stay with them.  They did not go off on their own but sought to be near Jesus whom death could not contain and in whom life everlasting was to be found.

They sat at table and Jesus took bread, blessed, and broke it and gave it to them.  And in this Communion their eyes were opened and their hearts burned.  From the Law and the Prophets which testified to Jesus, they moved to the meal where Christ is known in the bread of His flesh and the wine of His blood.  And this would be how they would be near Jesus all the rest of their lives before they saw Him face to face in heaven. They would meet Jesus where Jesus is to be found – in the Word of Scripture and in the bread and wine of His Holy Supper.  There is Christ.  There is the context so that His death is no tragedy but the divine and saving plan of God to save us.  There is Christ’s grace to forgive them still.  There is Christ’s hope to speak to the suffering.  There is Christ’s life to rescue them from death.  It is there in the Word preached and the Sacrament of His body and blood eaten and drunk in His name.

We live in a world where even Christian folks will exchange the Word for a hint of glory, for festive parties, for miracles that defy explanations, and for endless hallelujahs. But that is not where we live.  We live on the road, in the journey of this mortal life, from its beginning to its end.  The miracle is not that our lives take a different turn away from the ordinary but that Christ is there IN the ordinary – with us in the journey, with us in the struggles, with us in our fears, with us when our hearts burn with fervor and when they are cold and empty, with us in the guilt and shame of sins that need forgiving, with us in the sorrow and tears of death.  And how is He here?  He is here in His Word, the living voice of the Good Shepherd who knows His sheep and His sheep know Him.  He is here in His Sacraments, the means by which we die in baptism and are raised to new and everlasting life AND the means by which we are fed and nourished upon the heavenly food of Christ’s flesh and blood.  You are not alone.  Christ’s death was no tragedy.  His resurrection is no myth and His life is no dream.

Easter is as much about the death of Jesus as His life.  For in Easter we discover that this was no tragic death but the determined death of the Savior who was willing to sacrifices Himself on the cross to save us.  In order for Him to be raised, He had to die. And His death had meaning and has power.  It was all there in the Scriptures and it is all here in the Sacrament of His crucified and risen flesh and blood.  And for all who believe it, this is the best good news and the greatest event of all time.  Those disciples were headed home to nurse their disappointments but Jesus sent them back to Jerusalem.  They had been headed west to Emmaus but turned around and headed East to Jerusalem, because the Son rises in the East!

Now my friends, I have no clue where you are in your journey of life.  Some of you are further along than others.  Some of you are just beginning.  But this I can say to you.  This is YOUR Jerusalem.  This is where the cross moves from tragedy to triumph.  This is where Jesus still takes bread, blesses it, breaks it, and gives it to His people.  This is where hearts burn and eyes are opened.  This is where we recognize the Jesus who is not up there somewhere or hidden inside our hearts but with us in the voice that speaks into our ears, in the splash of baptismal water, and in the taste of bread and wine.

He died no random death but the death that gives us life.  He lives not to put this back to the way they were but to impart a new identity to us and to register a new destination for our journey of life.  He is here not in our imagination or our feelings but in the concrete of His Word which was always about how He must die to save us and rise to give us everlasting life.  His scars are no longer the marks of His suffering but the holy marks of His victory.  So it will be for you.  What you endure today will become the marks of your glory tomorrow when you endure in faith by the Holy Spirit.

While we await the day when we shall shed this mortal clothing to death and rise in Christ in glorious flesh and blood like His own, He is with us.  The devil cannot accuse us anymore, the world cannot steal our hopes away anymore, and death cannot end our lives anymore.  This is YOUR Emmaus Road and Christ is here, opening up the Scriptures to us so that we see how He was appointed to die that we might live and opening up our eyes to see Him in this bread which is His body and this wine which is His blood.  This is our fellowship with Christ and through Him our fellowship with one another.  Here in this breaking of the bread, you see the crucified and risen Lord.  Christ is risen.  He is risen indeed.  Alleluia.  Amen.