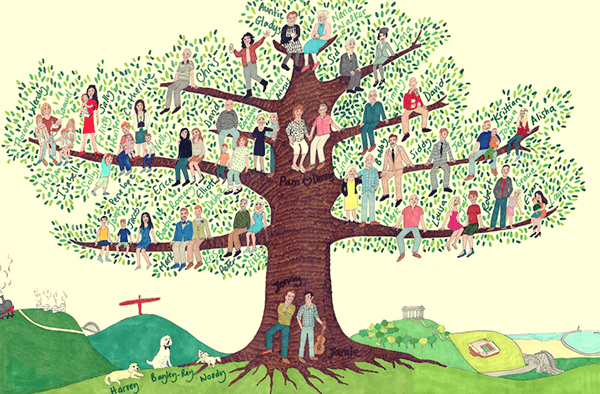 As a child my brother and I went regularly to family reunions.  There were hundreds of family members on one side and we hardly knew who these people were.  Aunts and uncles of my father ended up being our aunts and uncles with hardly a thought to the generation that should have distinguished the relationship.  Cousins were cousins and we did not have much of a thought as to first or second or once removed or whatever. On my mother's side there were far fewer.  The families were smaller and had limited and more recent roots in America.  Nevertheless, it was a very long time before I realized my Aunt Ruth and Uncle Roy were a great aunt and a great uncle by marriage.

The families stuck together in large measure because most of them lived fairly close to each other.  Sure, some had moved away but they came back and their roots were more often still tied to the family home even if it was not their home.  Of course, it is different today.  Family members are more likely to live very distant from each other and their time together occasional at best.  Family reunions have dwindled since the cousins seem to have lost the deep connections their parents once shared.

My wife does a great deal of work with our ancestors and has put together extensive family trees.  Interestingly, it is harder and harder to do that work.  Even with technology on our side, obituaries are not as extensive as they once were and family secrets harder to mine from what is published.  Cremation means fewer burials and fewer headstones from which to discover facts and fortunes.  But most of all, fewer kids period.

Never was this more clear to me than watching the news while drinking coffee and hearing that Martin Luther King had but one grandchild -- a nine year old daughter of a sixty some year old son.  In other words, this iconic figure has a family future tied to one girl.  Look around.  It is true of many families.  There are fewer aunts, uncles, and cousins, fewer grandchildren and great-grandchildren.  What will future family trees look like?  It is hard for me to get my mind around it.  More and more choosing not to be married, to remain single or to cohabit and fewer and fewer children to come from these relationships.

Think about this:  about 45 percent of children will grow up without a brother and 45 percent without a sister. About 20 percent will be only-children, growing up without either a brother or a sister. A full 70 percent of the children will grow up without a sibling of one sex or the other — a brand new circumstance in the entire history of the world.  In the end, I fear it is not a circumstance that bodes well for family, for learning who we are, and for growing into our roles as men, women, husbands, wives, and the like.

Kinship has always been at the foundation of community life and society.  Blessed Mary sojourned with her cousin Elizabeth.  It has always been this way. . . until now.  And that is uncharted territory that I wish none of us had to explore.
Posted by Pastor Peters at 6:00 AM