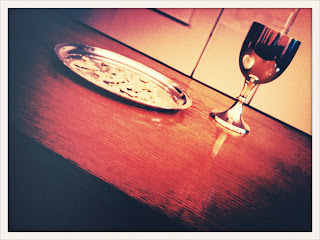 Unlike some, I do not look back to some pristine age of perfect liturgy and yearn to restore what was but was lost.  It is a romantic ideal that is not only false but toxic.  Dom Gregory Dix was guilty of harboring the idea that the liturgy had a pristine form which, if recovered, could help us out both in the grand ecumenical scheme of things and in a truly authentic liturgy for the folks in the pew.  It was not his finest moment and still detracts from his otherwise great insights.

Some Lutherans fall victim to that idea as well.  Liturgically they hold up page 15 and The Lutheran Hymnal as some golden era of great Lutheran hymns, music, text, and Divine Service.  Funny how that particular high moment in print is accompanied by a low moment in which the Divine Service was typically held quarterly and most folks in the pew saw it as an optional extra to the Service of the Word.  I grew up with TLH and still sing page 15 and 32 by memory and even recall fondly page 47 and the Verily, you should to the long form of questions and answers.  Musically, TLH fits within its time and has not been the kindest to some melodies.  I do not think the Lutheran Service Book is any less faithful than TLH and actually is an improvement in many areas.

So I find it strange when some are waxing eloquent about the liturgical legacy of the corona virus and the shut down of the churches.  Some voices are almost happy to have had a time in which the extras are missing and we are left with the simple form and text of prayer offices and the old dry mass.  On the one hand, I also appreciate the fact that even without pipe organ and choir and the fuller sound of many voices raised in song, the liturgical rites of our hymnals have great integrity and richness that cannot be denied.  However, lets not be swayed by romantic delusion.  No one should give up the fuller experience of the Divine Service for a regular diet of unaccompanied singing and the bare minimum of ceremony and ritual.  If we must, we shall make do with a more ascetic form of the liturgy but not as a choice we make and only as something we must endure for a time.  It is not at all a fault or defect of the basic form that we must add to it the fuller ceremonial and singing accompanied by noble instrument as a correction or repair.  Such is not at all the case.  Rather, it has to do with the pursuit of beauty, the accomplishment of excellence, and the use of the manifold resources God Himself has supplied to respond to His Word and gifts.

Our best for His glory.  That is the principle.  The basic form is eloquent and and noble but the expansion of the liturgy over time it itself not a defect either.  The entrance rite has expanded with the size of the building.  Introit, Kyrie, Gloria, Salutation, and Collect all combine for wonderful effect in what became a much more elaborate rite over time.  Yet it has increased the Scripture in the Divine Service and provided for even greater opportunity for our response.  I know that from time to time it is easy to take the fuller form for granted and perhaps that may be a salutary lesson from the time in which we have had to do with less than the fuller celebration.  That said, we need to be careful.  It is not and need not be a choice between less or more.  We should offer the fullest in ceremony and our best for His glory all the time and strive for excellence in all we do.  It is not a matter of less being unworthy of God but if we have more, then more is what we offer to the Lord.

If we had more, would we eat a diet of broth and dry bread?  If we had better, would we wear threadbare clothes?  Perhaps we have learned too well to settle for less and to live with what is comfortable no matter how it looks.  This is not a good thing.  Neither will it help us to look with fondness on the time we went without the Sacrament or made do with a minimum in the Divine Service.  The Word is sufficient to be sure but God did not leave us with only the Word no matter how efficacious and sufficient the Word is.  He bestowed upon us the Sacrament of the Altar and commanded that us to do this often in remembrance of Him.  In the same way, a bare liturgical rite does not lack anything but neither does its spare form improve upon a fuller expression.  It is a matter of our best for His glory, the use of the fuller resources and gifts He Himself has supplied for His praise, and at the same time the acknowledgement that these do not make better His grace or improve upon His Word, or make efficacious the means of grace.  Don't be gettin romantic about how great it was when we had to do without.  And don't be thinkin that we add anything to God's gift and grace either.
Posted by Pastor Peters at 6:00 AM

A typical LCMS congregation has a small organ that doesn’t sound good.

An organist that neither knows nor plays Buxtehude.

A soloist who isn’t particularly suited for the role.

A barely audible, aging choir, if they can muster a choir at all.

Is it any wonder so many turn to contemporary worship?

Would we settle for rice and beans...the problem is we have to make the meal. Would we choose to stick a Lean Cuisine in a microwave over preparing an elaborate Italian meal by hand? The reason so many of us lean to the bare bones is that we are lazy. We like it when the praise band does all the work, and we just have to sway along. We like it when the pastor is the only one who opens his mouth (we can zone out). Liturgy is work.

Liturgy is work that is worth doing. Hymns are worth singing. Listening to the Word is worth the effort. We are sadly unwilling to give our best. That is why the typical congregation prefers contemporary worship.