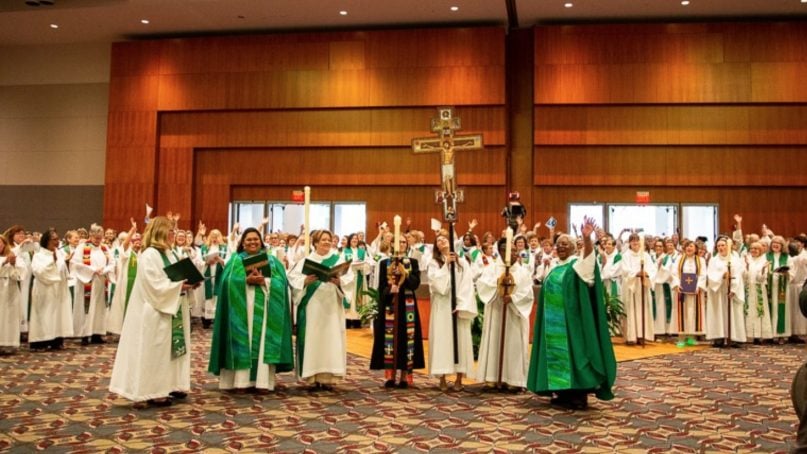 Now 50 years ago the American Lutheran Church and the Lutheran Church in America, the predecessors of the 1988 merger into the Evangelical Lutheran Church in America (ELCA) ordained the first Lutheran women in the USA.  The Rev. Elizabeth A. Platz, was ordained Nov. 22, 1970, by the Lutheran Church in America, following the approval of the LCA in June of that year.  Within a month the American Lutheran Church had ordained the Rev. Barbara Andrews, having given approval to women's ordination in as recently as October.  Although this was not a rash action -- it had been debated and discussed for some time and in official publications of those church bodies -- it was not given clear theological justification.  The theology fell in line because for those church bodies the time had come and culture was pressing upon them to act.  In neither church was there a theological study to given cover the decision but in both bodies there were voices of the emerging feminist movement as well as the actions of European bodies which had acted as early as two decades before the Americans.  These were followed 10 years later by the ordination of the first women of color and then 40 years later by the ordination of the first transgender people as pastors.

Now well over a third of the active clergy in the ELCA are women and nearly half of all candidates for ordination were female in the last year for which statistics are available.  But women clergy are said to lag behind men in pay and in acceptance in the parish.  This dispute the fact that there are a significant number of women bishops in the ELCA.  At least 17 of the ELCA's 65 synod bishops are female but women still lag behind mind in holding the title of senior pastor.  So for many in the ELCA the struggle is not over.  But for others, women pastors remain controversial at best and a scandal at worst.  I knew two female LCA pastors who have a long fight to justify their ordination theologically, renounced their ordination and were received as lay members of the Roman Catholic Church.  For them, this failure to justify their ordination became a shadow that would not go away.  One might wonder if there will ever be a theological justification for the breech in history and theology with even our recent Lutheran past.  Or perhaps it is either too late or not necessary to give theological cover for a decision which is now seen as a done deal.  After all, when the NALC and LCMC left the ELCA, both continued the practice of women's ordination.  It has become a non-negotiable.  The same is true for the Episcopalians who left to form the Anglican Church in North America.

For the ELCA, the decision to ordain women eventually led to decisions to accept homosexuality and transgender clergy.  While it is not necessary to link the two or to judge the ordination to be the causal event for this choice, it is impossible to deny that the other would not have happened if women had not been ordained.  So the anniversary will be celebrated with great fanfare among those who favor this decision but it cannot be denied that it is an lex still in search of a ratio.  That would seem to have put a damper on the 50th anniversary but it does not look like anyone still cares.  Just a few thoughts as we approach the 50th anniversary of the ordination of an ALC woman while that body was technically in fellowship with the LCMS.  Now isn't that ironic!!

Rev: Peters: "Just a few thoughts as we approach the 50th anniversary of the ordination of an ALC woman while that body was technically in fellowship with the LCMS. Now isn't that ironic!!"

Well, in 2001 the LCMS declared Altar and Pulpit fellowship (p. 136) with the Evangelical Lutheran Church of Latvia (ELCL). And for the next 15 years, the LCMS/ELCL Joint Statement of Agreement (p. 173) opposing the ordination of women to the pastoral office just looked the other way on the ELCL's actual Constitution, Article 133, which stated (in Latvian of course) that "anyone who according to the regulations set by the ELCL is called by God and trained for ministry can seek ordination.” Instead the LCMS relied on Archbishop Janis Vanags' promise, "Yeah! Not gonna be any women ordained as long as I'm the Archbishop."

It wasn't until June 3, 2016, that the ELCL officially amended its Constitution permitting only males to be ordained as clergy.

And then there's the 2014 revised top-secret, classified working-partnership 2010 agreement signed by the LCMS and the charismatic, unionistic, pastrix-ordaining Ethiopian Evangelical Church Mekane Yesus (EECMY), and for the past six years the LCMS and EECMY have been in formal fellowship discussions. The truth is that between 2009 and 2018 the LCMS and EECMY were in de facto (or at least selective) altar and pulpit fellowship when continuing LCMS rostered-member Rev. Dr. Berhanu Ofgaa, was the elected EECMY General Secretary publicly endorsing and promoting pastrixes in the EECMY, which is still allowed today.

Let's not forget the irony of December 17, 2017, when LCMS President Harrison joined with an Islamic cleric and other religious leaders to sign a U.S. Conference of Catholic Bishops open letter, "Created Male and Female.

In the open letter President Harrison and the other signatories stated, "We come together to join our voices…" and then proceeded to confess "As leaders of various communities of faith.... [w]e acknowledge and affirm that all human beings are created by God and thereby have an inherent dignity. We also believe that God created each person male or female." This gave a false confession that the LCMS in some way acknowledges the same "God" as a denier of the Holy Trinity, pretty much the same as the LCMS did at Yankee Stadium and in Newtown, CT.

An archbishop once said to me, "The road to hell is paved with bishop's skulls."

Back in 1976, a sermon was given by Rev. Ed Schroeder which encapsulates the poor theology that WO advocates continue to cling to in the confident assurance that WO is indeed "God-Ordained." To his credit, Rev. Schroeder did ask the question, "But what if we are wrong?" You can read the entire sermon here: https://crossings.org/whose-church-is-it/

His response is quite fascinating. . A new Lutheran doctrine emerges where we can be assured, after our death, that forgiveness of sins from the Almighty is still negotiable. Perhaps this new doctrine, along with the absence of a Matthew 7:21-23 in the ELCA Scripture, is what makes WO so worth the risk!