When the Pope betrays the faith. . . 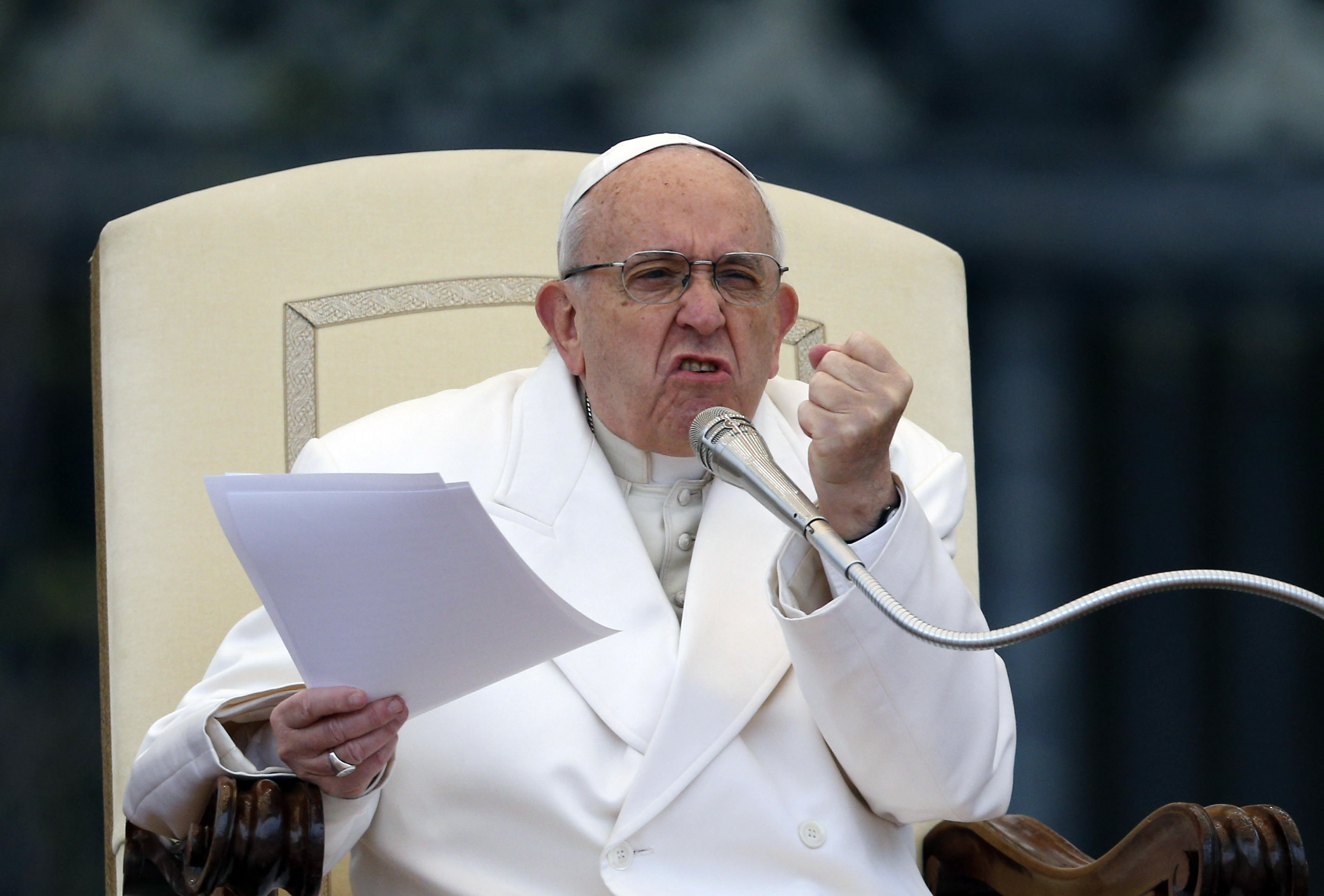 The kind of liberal and progressive views that undermine the faith are in evidence from Pope Francis.  He was and is a radical whose approach to the social issues vexing the faithful cuts the legs out from under them and makes orthodoxy appear exceptional and foreign to Christianity.

ROME (AP) — Pope Francis endorsed same-sex civil unions for the first time as pope while being interviewed for the feature-length documentary “Francesco,” which had its premiere at the Rome Film Festival on Wednesday.  The papal thumbs up came midway through the film that delves into issues he cares about most, including the environment, poverty, migration, racial and income inequality, and the people most affected by discrimination.

“Homosexual people have the right to be in a family. They are children of God,” Francis said in one of his sit-down interviews for the film. “What we have to have is a civil union law; that way they are legally covered.”  While serving as archbishop of Buenos Aires, Francis endorsed civil unions for gay couples as an alternative to same-sex marriages. However, he had never come out publicly in favor of civil unions as pope.

Rome has for a long time had trouble admitting serious problems.  Rome is full of paper hangers who put new wallpaper over the cracks and presume that everything is okay.  We saw that with the child abuse scandals and we have seen it doctrinally with those who refuse to let the words mean what they say and who believe that the future of Christianity lies with accommodation.  Francis has been a problem for a long time and just when everyone seems to raise up their hands in despair, he backs away from the cliffs.  Yet the damage done by every foray into liberal and progressive Christianity undermines and weakens orthodoxy.  Politically this means that Justice Amy Coney Barrett becomes the exception among Roman Catholics for actually believing and attempting to live her faith and Joseph Biden becomes the rule -- a cafeteria Christian who picks and chooses what he believes, supports, and accepts.

Confessional Lutherans have long looked to Rome as an ally in preserving the faith against the inroads of culture and relativism but they have been an unreliable ally.  Nowhere is that more apparent that Pope Francis giving cover to the idea that same sex marriage (or civil unions) and the desire of such couples to know family life with children is not so bad.  Advancing such normalcy to such relationships is not seen by this Pope as having any collateral damage to the preservation of marriage between one man and one woman and the traditional shape of the family.  Nothing could be further from the truth.  It seems that perhaps the loneliest place in Christianity is reserved for those who believe the Scriptures, who confess the creeds, and who adhere to the unchanging truth of doctrine and truth.  If Pope Francis will not stand up and be counted on this front, he has abdicated his moral authority and any claim he makes to be guarantor and preserver of the sacred deposit.

The Pope is less a buffoon than he is a conniving and crafty adversary of the faith, of the witness of the Scriptures, and of the catholic tradition and creeds that have been confessed down through the ages.  He is in league with those who have been working to change the face of Roman Catholicism in the same way that liberal and progressives have changed the face of Lutheranism.  We are in a battle for the soul of the faith and the life of the Church and nothing less than an unwavering commitment to orthodoxy will suffice.  While we may have been able to coast along in the past, we must now swim ever harder against the stream of relativism, individualism, and liberal progressivism.    Who am I to judge?  Well, when it comes to doctrine and dogma, you might have thought that was the Pope's job (the most essential episcopal role to supervise doctrine and practice).

How true it was and is that the real dangers facing Christianity come from within, from those who have been charged with maintaining our witness to the truth!  No one on the outside of Christendom can do as much damage as somebody like Francis who sits on a throne and advocates against what the Scripture and tradition have held through the ages.  While we do not despair because it is the Lord's Church and that Church has His promise attached to her survival, we must not become complacent or grow weary of the struggles before us.  Jesus promised of the fight to come and He has given us every weapon and tool we need to fight against those enemies of the faith and of the Church.  It is time to wield that two edged sword against those who would rot the structure from the inside and not just pontificate against those outside the faith.

No pope can expect to be followed when he departs from the faith and the Word of God and no pastor can expect to be followed when he departs.  That is why it is so important for God's people to be well catechized in the faith, to know the Word as the familiar voice of the Good Shepherd, and to be able to recognize when the voice coming from a papal apartment or a local pulpit is wrong.  We are not talking about hearing things we do not like or want to agree with but those things that contradict the faith once and still confessed.  We are not talking about reason that sits upon the throne above the Word of God but about what is heard and how it squares with that Word yesterday, today, and forever the same.

This is like throwing a brick at a glass house. It would have been less contentious if the Pope decreed that priests could marry women. At least that might keep some of the homosexuals out, and it would have been a biblical decision. The next ruling from this progressive may be to allow homosexuality among priests. He will simply declare it is no longer a sin, merely an alternative lifestyle choice. I have a religious Catholic neighbor who said it is difficult to remain Catholic as it is, due to the legions of pedaphile and sexual abuse cases reported over the years. I think this ruling proves that Popes are not infallible after all.

"The Pope is less a buffoon than he is a conniving and crafty adversary of the faith, of the witness of the Scriptures, and of the catholic tradition and creeds that have been confessed down through the ages."

"... the Pope is the very Antichrist, who has exalted himself above, and opposed himself against Christ because he will not permit Christians to be saved without his power, which, nevertheless, is nothing, and is neither ordained nor commanded by God.... Therefore, just as little as we can worship the devil himself as Lord and God, we can endure his apostle, the Pope, or Antichrist, in his rule as head or lord."

Ann Barnhardt had this figured out years ago.