The notion of sacred space has long been tested against the idea of multipurpose facilities that are used for a variety of purposes -- something about as far from their intention as you might imagine.  Some of those uses for sacred space are benign.  For example, we use our nave for such things as preschool graduations and the occasional concert or recital.  The children of the Sunday school put on their telling of the Christmas story in that space.  But there are limits.  Some possible uses would not simply detract from the sacred space but conflict with its purpose and its message.  Yes, message.  The stained glass, painting, altar, font, pulpit, paraments, banners, and crucifix all proclaim a message -- of who we are and what God has done to make us His own and of our life together around His Word and Sacrament.  So when a blog reader pointed me to this picture, it epitomized all that is wrong with trying to use sacred space for not so sacred purposes. 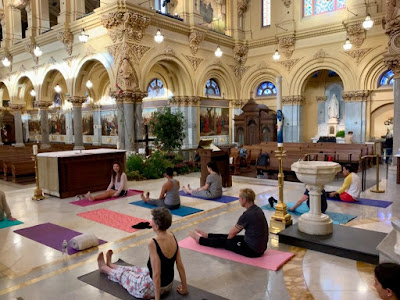 Whether this is stretching or exercise of yoga, you can see how it confuses the space with a purpose that this space was neither intended nor designed to support.  Indeed, it is hard to imagine a purpose less in keeping with its reason for being than this (unless it was something designed to profane the very notion of sacred space).  For one thing, this takes place in the chancel -- literally behind the altar!

Of course, you can see that this is a Roman Catholic Church but Lutheran readers should not be smug about this.  Our own churches have suffered the same confusion of purpose when the space where the Word is preached, absolution is given, baptism imparts new life, and the very Body and Blood of our Lord are given and received is rendered ordinary and simple square footage to be used as need would have it.

Hidden in this is another issue.  How many of the things churches do (like the picture above) not only affect the sacred space but the sacred purpose of the Church?  In other words, how much of this kind of stuff does it take before the unique and divinely established purpose and identity of the Church is lost, when worship becomes merely a program, and when spreading the Gospel begins to mean doing what people want us to do for them.

Of course you realize this is a Jesuit run church.

This "church" is St. Francis Xavier in New York City.

In addition to yoga in the chancel (worse still using mats of non-liturgically correct colors!) St. Xavier also has regular meetings for queers "in a welcoming and affirming environment to address gay Catholic life," as well as meetings for lesbian Romanists.

The LCMS district to which the church I attend belongs has an article in their newsletter encouraging its pastors and lay-people to attend a conference on 'faith formation' provided by an organization called
'Forming Lutherans'. Here's a link to their website:

If you scroll all the way to the bottom of the page, you'll see a statement that "This program is made possible through a Vital Worship Grant from the Calvin Institute of Christian Worship."

I searched for 'Calvin Institute' (clever name, by the way) and found its website:

If you go to the website, you find articles such as "Faithful anti-racism is the time of pandemic", "David Bailey and Erin Rose on White Supremacy", and "Anti-Racism in the Renewing of Christian Worship 2020".

So, we have the LCMS encouraging its pastors and lay-people to attend a seminar sponsored by a Calvinist organization, which has a blatant anti-white and anti-American agenda.

Moral of the story. It seems like our LCMS is not far from the practices espoused by St. Francis Xavier church.