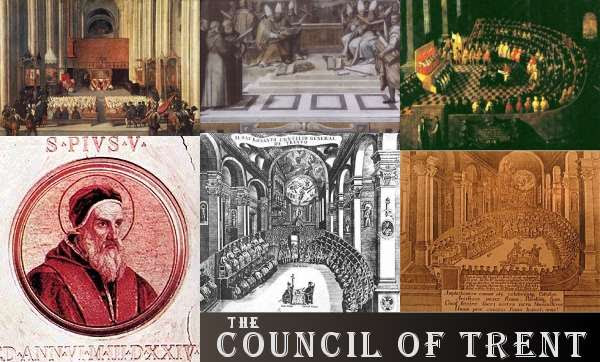 Today, December 4, is the 450th anniversary of the Reformation era Council of Trent.  The Council of Trent was convened on Dec. 13, 1545, in Trento, Italy — some 28 years after an obscure Augustinian monk named Luther nailed his Ninety-Five Theses to a Wittenberg church door in what is generally considered to be the spark that ignited the Protestant Reformation. Though the bishops, abbots and theologians at Trent responded to the issues raised by Luther and other Protestants, they were not primarily there to defend themselves against their adversaries.  Meeting in 25 sessions over nearly two decades until adjourning on Dec. 4, 1563, Trent was called to address the faults, weaknesses, and challenges known to nearly all the leaders of the church but which could no longer be ignored with the Protestant rebellion having laid down the challenge.

More than anything else, this council defines what we have come to call the Roman Catholic Church.  Trent addressed some of the most fundamental topics of Christianity -- from the relationship between Scripture and Tradition to the nature and number of the sacraments -- and fundamentally shaped both the liturgical identity of the Church of Rome as well as restructuring its relationship to its geographically diverse locales -- not to exclude the whole of the New World.

Many of the changes were long overdue and addressed some of the very things that gave birth to the Reformation (among them bishops holding multiple episcopal jurisdictions, often bought and paid for with a sort of endowment, and creating the opportunity for short cuts to the priesthood and episcopacy for those capable of such benefices).  Many of them solidified the modern form of Roman Catholicism (not that they made ground breaking change like those blamed upon Vatican II but that discrepancies were resolved, liturgical diversity tightened up, and the role and rule of the papacy strengthened).

One of the great failings of many Lutherans is to address the Reformation to the post-Tridentine Roman Catholic Church.  Luther and the Reformation may have looked much different had the whole thing begun after Trent's reforms and definitions been established.  That is not to say there would have been no Reformation but the church prior to Trent was certainly less centrally controlled.  One other area of significance lies in the fact the prior to Trent seminaries as such did not really exist.  This reform of the council had lasting impact upon the church and prevented some of the more celebrated abuses and voids in pastoral training and formation -- something that certainly did impact Luther.

Funny, though, that Trent seems to be held in higher esteem today than it was even 50 years ago when Vatican II seemed to be the springtime and Trent was judged to be the winter of discontent.  What many inside and outside of Rome forget is that there is a culture of continuity within Rome that means it is never redefined, only nuanced toward this direction or that.  In this respect, Lutherans would insist that the root causes of the Reformation remain valid -- post-Trent, post-Vatican I and II, and will remain post-Francis!  Thus, what Jaroslav Pelikan called, the tragic necessity would not have been averted and obedient rebels would still have been needed...

Anticipating the Lutheran nostalgia for the Council of Trent, especially Session VI, Canons XI and XII, this book should be coming out before Christmas.

For other Lutheran, it will be an addition to the bonfire celebration on December 10.

What on earth is "The Council of Trent Canons: The Lutheran Edition" all about? I cannot wrap my mind around that!

This post is the first time I have ever heard a Lutheran mention Trent without swearing. I'm impressed.

It is a joke, Dr. D. The source of this joke, Carl Vehse AKA Rick Strickert, is mocking CPH and its series of volumes (Lutheran Study Bible, Apocrypha, etc...). There is no such volume. Not now. Not ever.

BTW, Concordia Seminary Professor Friedrich Reinhold Eduard Preuss (1834-1904), who edited the 1861 edition of Chemnitz's Examen, as well as Johann Wilhelm Baier's Compendium and other Lutheran works converted to the Church of Rome on January 26, 1872. Preuss explained his Roman conversion in his 1879 book, Zum Lobe der unbefleckten Empfängniß der Allerseligsten Jungfrau ("In Praise of the Immaculate Conception of the Most Blessed Virgin"), which also retracted Preuss' 1865 book, The Romish Doctrine of the Immaculate Conception that had denounced such "false doctrines of the Roman Church." The romanist Preuss also rejected Lutheran doctrine of justification and became convinced that a Christian is saved by faith and works.

C.F.W. Walther's response (without mentioning Preuss by name) was in his lectures in 1884 and 1885, published posthumuously as Die rechte Unterscheidung von Gesetz und Evangelium ("The Proper Distinction Between Law and Gospel").