What you hear and see... 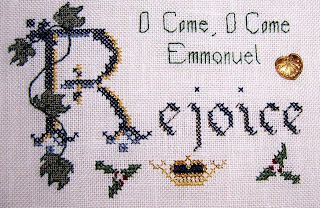 In the week that followed Advent 3, I became more and more interested in what Jesus said in response to the disciples of John asking:  Are you the One who is to come or should we wait for another?  It strikes me that Jesus answer was far more deliberate than we give Him credit.  Go and tell John what you hear and see...

Go and tell John what you hear. . .  This seems to beg the disciples of John to hear the Word of the Lord, to listen to the voice of the prophets, of whom John is greatest.  It is not a request to pass on rumor, guess, or opinion but the one Word that is solid and concrete, the Word that endures forever.  It is as if Jesus were asking them to hear the Word of the Lord in exactly the same way that St. Paul reports Faith comes by hearing and hearing the Word of God...  Jesus does not ask for the to conclude anything but to listen.

Go and tell John what you see. . .  Again, Jesus does not invite them to interpret what they see but to actually see -- to see the Word as a visible Word in the promise kept and the Word that actually does what it says.  Do the blind see, the deaf hear, the lame walk, the dead live, and the poor have the good news preached to them?  This is not a call to interpret the signs of the times but to see with eyes of faith.  In this way the miracles that Jesus refers to are made to be sacraments (visible Word) of the Kingdom.  They are not different from the Word but the Word in action.  Jesus asks them to see with eyes of faith what the Word (He) is doing in their midst.

It is as if Jesus is previewing Word and Sacrament.  The Word that speaks the Kingdom to ears who will hear it (with faith prompted by the Holy Spirit) -- this Word still speaks, still delivers what it promises and still does what it says.  Where that Word speaks, the blind still see, the deaf still hear, the lame walk and dance, the dead are raised never to die again, and the poor hear good news of eternal consequence.  The Sacraments are still the Word in action, hidden in the weakness of earthly form, delivering heavenly grace.  The blind, deaf, lame, dead, and poor come to the waters and they see, heard, walk, live, and rejoice.  The blind, deaf, lame, dead, and poor are seated at the Table of the Lord where their eyes are opened, their ears unstopped, their wounds healed eternally, their lives raised to everlasting life, and the poor delight in the riches of grace that is their gift and blessing!

The witness of the Kingdom remains not what we do or have done but on what God has done in Christ to speak rescue to the lost and freedom to the captive and sight to the blind and hearing to the deaf.  We are so jaded by technology and the modern miracles that elicit a yawn from us instead of awe that we miss the sacramental miracles of the Kingdom and treat the extraordinary as if it were routine.  We do not need the miracles that are already being done.  We need the miracles unique to the Kingdom of God and those miracles are still happening in our midst by God's design and power, through the Word and Sacraments.

In so many ways we remain like John's disciples -- we want to believe, we do believe, but we are intimidated by the risk and seek the comfort of a guarantee or assurance that will remove every risk from believing.  Are you the One or should we look for another?  Jesus does not offer philosophical proofs or scientific proofs (though these could be offered) but asks us anew the age old question:  What do you hear and see?  And there is the mystery and sacramental presence of the Lord doing what He has promised to do in the midst of His people every week:  through the means of grace.
Posted by Pastor Peters at 6:00 AM