Shuffling the deck does not increase the number of cards. . . 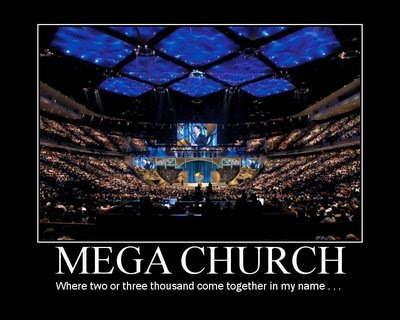 Unless you cheat, you can shuffle the deck all you want but the number of cards remains static.  For years we have heard that abandoning everything that could be labelled traditional (liturgy, architecture, music, doctrine, etc...) appeals to the unchurched and makes inroads into this largely untapped market.  Though many (including me) have been skeptical of this approach, the seeming success of the megachurches has left mainlines, other evangelicals, fundamentalists, and even some Roman Catholics to take notes and emulate the Saddlebacks and Willowcreeks and Mars Hills of the modern Christian world -- all in the hopes of filling the pews.

Honestly, there is not a "traditional" pastor and church which has not had second thoughts about perhaps borrowing a thing or two from these big box Christian churches.  Even if we do not abandon our theological integrity to do whatever it takes to get folks in the door, we have learned a thing or two about parking, cleanliness, signage, and a friendly welcome.  Part of us remains tempted to go a step or two further and there is no shortage of loud voices in nearly every denomination screaming at us to go with the flow -- entertainment worship, customer service, convenience, creature comforts, winsome atmosphere, positive preaching, etc...

And then I hear about a study, NOT WHO YOU THINK THEY ARE: A Profile of the People Who Attend America’s Megachurches, by Scott Thumma and Warren Bird, for the Hartford Institute for Religion Research (2009), and find out all is not how it seems.  Could it be that only about 6% of the folks who attend these mega versions of culture friendly Christianity are really unchurched?  Could it really be that the vast majority are Christians who were merely shuffled through the deck of denominations and congregations and may not now be "home"?

Even more startling is the statistic of only 2% do not already consider themselves committed followers of Jesus Christ.  In other words, in the vast auditoriums these mega churches call church, only handfuls of those attending are the so-called seekers taking Christianity out for a trial ride.  What is even more strange is that a significant percentage of that 2% remain uncommitted even after 10 years in some of these dynamos of Christian mission.  How missional is that?  Well, I would say that we have more searchers sitting in a rather high church Lutheran setting on any given Sunday morning than some of these mega missional poster children who have become the envy of the Christian world.

Read it all here... because I have highlighted only a few tidbits to raise a few eyebrows...

So what is the difference?  The crowd at the megachurch is typically single, young, without children, a bit higher on the economic ladder, mostly uninvolved in the church except for worship services, give less, may have loyalties to other churches as well, attend less regularly, were already "committed Christians" before attending there, value an individualized spiritual program above all, and are interested in personal spiritual growth even more than faith, and are generally more connected to the visible church leader (senior pastor?) than the community itself...  Does that sound healthy?  Does it sound like emulating this example is the key to revitalizing the local, say, Lutheran parish?

The megachurch phenomenon has been far more adept at shuffling Christians around than multiplying them.  While some may claim that in and of itself is important, I am not ready to pack up my Lutheran identity and exchange it for a Rick Warren mask...

My point is not to denigrate them but to ask us why we pay so much attention to what they do instead of listening to our confession, being true to our own (Lutheran) identity, and using a little common sense to make sure that we show our best face to the visitor or folks who drive by?  WE are the ones who have idealized and idolized the megachurch existence.  It is about time we saw through our perception and realized that taking a little Lutheran parish in the rural Mid-west or urban Northeast, or suburban South and trying to make it into Saddleback, Willow Creek, Lakewood Church, or Mars Hill is NOT going to solve our problems.  THAT is my point!
Posted by Pastor Peters at 6:00 AM

My question is: Where has the catechesis gone? Not just in Lutheran churches, but Presbyterian and especially Baptist?

For the life of me, I don't understand why so many young (and old) people want to worship as if they were at a rock concert. Where were they when the Sunday School lessons covered the pagan worship of the Old Testament? All you need to do is give the people knives and they'd be just like the prophets of Baal against Elijah and the True God.

Baptists tend not to believe in creeds or catechisms. Because of being in the military I've been a member of a few confessional Presbyterian churches and they generally took catechism seriously, some to a greater degree than others. But we're rather smaller than the LCMS.

To pastor Peters: "Amen to that!"

Our LCMS congregation has gone the route of looking for the seekers! I found that when you speak to these people, many are coming from other churches and seem to be seeking all the time. Meanwhile, our traditional Lutherans are leaving out the backdoor and not even saying goodbye. It is painfully sad.

I see it as a popularity contest.....no different than high school. It's sad that people would give up who they are to try to be popular. You'd think they'd grow out of it and realize how shallow that is.