...all our pleasant places have become ruins...so says the prophet Isaiah in 64:11.  It is not simply a call to acknowledge the sorry state of affairs in the broken and fallen reality of what once was.  It is also a call to see in the ruins the former beauty and the present promise of the restoration at the hands of God.  The nature of Advent's call to survey the ruins of our fallen lives is not the lament of the hopeless but the sight of the faithful who see in those very ruins the pattern of what was and what will be again by God's gracious intervention.

Repentance in Advent does not end with the lament of the ruins of our lost lives, the mountains of our sin, and our inability to correct the sinful desire of our hearts.  No, indeed.  The ruins are ruins, to be sure, but they are the visible pointers not only to what was lost but also to what Christ has come to restore.

Walking in the ruins of once noble buildings we are left with two choices.  We can lament their state and grieve over their loss.  But that is not all we can do.  We can imagine their glory within the limitations of human frailty and be encouraged even by those ruins.  So it is with repentance.  We survey the ruins of our lost lives and our world of darkness and death but we can also be encouraged by the promise of Christ and the restoration of what these images point to.  Ours is not the lament of a people who have no hope.  Ours is the repentant heart of a people who see in the images of our fallenness also the promise of what is to come.  What we lost because of Eden's rebellion will be restored to us in Christ.  What was stolen to us by death (the unknown consequence of that rebellion), Christ has come to replace, but with a twist.  Death will no longer threaten us and that which Christ restores will no longer live in tension with the potential for its loss.

Faith trusts not in what is seen but the unseen.  This is not only the hiddenness of God but the promise of what will be.  Faith affirms that despite what we see in the ruins of our world and our lives, God is trustworthy.  He is even now at work in the midst of the broken nature of our lives and our world.  So the Advent cry is not only to look around but to look up, not only to shed the tears of regret that accompany honest repentance, but to weep with joy at the God who gives back what was lost and more.

Advent seamlessly gives way to Christmas when in the midst of the ruins hope is born.  A child's cry stirs the night.  Angel voices and shepherd eyes behold the promise of our tomorrow right in the ruins of the present day.  The shape of our redemption is flesh and blood of the God who has kept His promise and become His people's shepherd and savior.  Christmas seamlessly gives way to Lent and Easter as the promise unfolds.  In the ruins of defeat and suffering, crucifixion and death, God has hidden our hope -- the dawn of the new day of salvation.  Easter confirms that the dead lives so that the dying may live through Him.  And all of this seamlessly unfolds into the waiting of a world living in the in-between of the promise and its unfolding end.  All along the way the Church speaks with the voice of faith.  Maranatha.  Come, Lord Jesus! 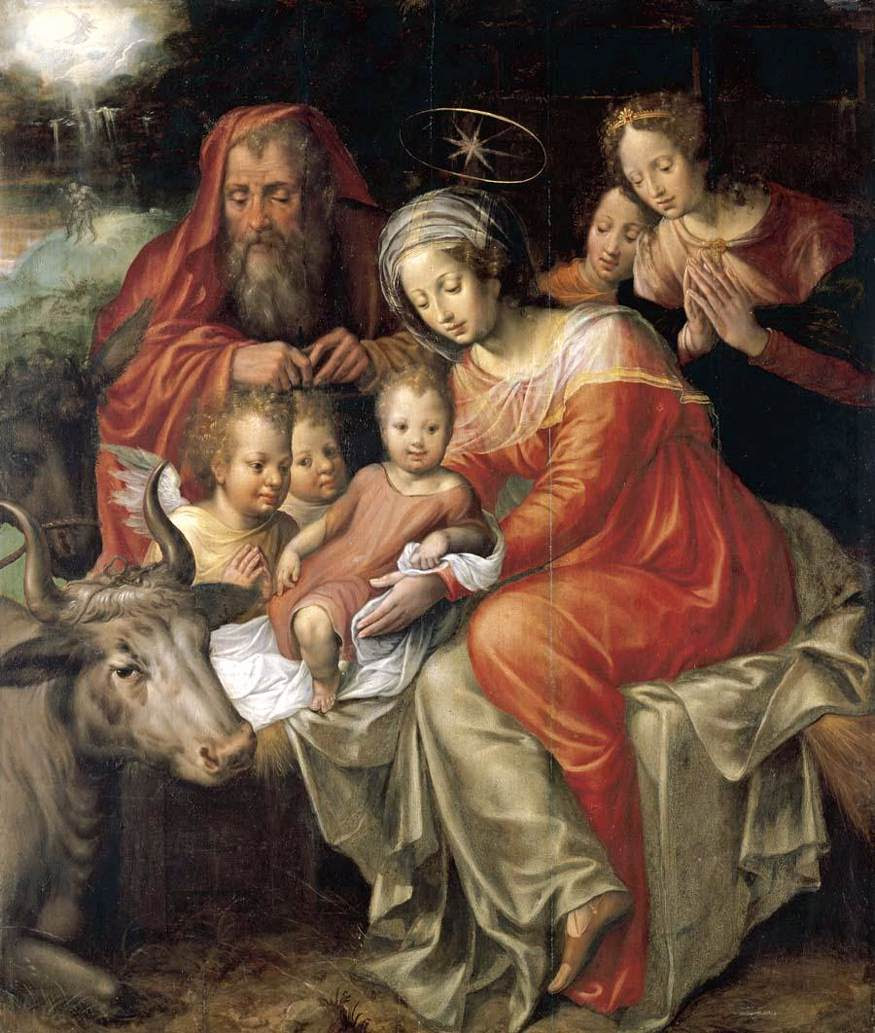 Luke2:1-20
And it came to pass in those days, that there went out a decree from Caesar Augustus that all the world should be taxed. 2 (And this taxing was first made when Cyrenius was governor of Syria.) 3 And all went to be taxed, every one into his own city. 4 And Joseph also went up from Galilee, out of the city of Nazareth, into Judaea, unto the city of David, which is called Bethlehem; (because he was of the house and lineage of David:) 5 To be taxed with Mary his espoused wife, being great with child. 6 And so it was, that, while they were there, the days were accomplished that she should be delivered. 7 And she brought forth her firstborn son, and wrapped him in swaddling clothes, and laid him in a manger; because there was no room for them in the inn.  8 And there were in the same country shepherds abiding in the field, keeping watch over their flock by night. 9 And, lo, the angel of the Lord came upon them, and the glory of the Lord shone round about them: and they were sore afraid. 10 And the angel said unto them, Fear not: for, behold, I bring you good tidings of great joy, which shall be to all people. 11 For unto you is born this day in the city of David a Saviour, which is Christ the Lord. 12 And this shall be a sign unto you; Ye shall find the babe wrapped in swaddling clothes, lying in a manger. 13 And suddenly there was with the angel a multitude of the heavenly host praising God, and saying, 14 Glory to God in the highest, and on earth peace, good will toward men. 15 And it came to pass, as the angels were gone away from them into heaven, the shepherds said one to another, Let us now go even unto Bethlehem, and see this thing which is come to pass, which the Lord hath made known unto us. 16 And they came with haste, and found Mary, and Joseph, and the babe lying in a manger. 17 And when they had seen it, they made known abroad the saying which was told them concerning this child. 18 And all they that heard it wondered at those things which were told them by the shepherds. 19 But Mary kept all these things, and pondered them in her heart. 20 And the shepherds returned, glorifying and praising God for all the things that they had heard and seen, as it was told unto them.

Now and then I have seen you and other pastors lament the fact that fewer people come to worship services, that traditional forms of worship are being abandoned, and that the old hymns have fallen into disuse. Everyone is looking for a solution to this problem.
May I suggest that we consider “Joy”? I am not talking about the artificial joy created by pep rallies and praise bands. I am talking about the holy joy that God wants us to have because the Holy Spirit, Who has made us new creatures, wants us to rejoice in the gifts God has given us not only in the life to come, but in this life.
There are those who point to our imperfection, to our fallenness, and to our sinful flesh, all of which require us to be in continuous repentance. This repentance becomes the real purpose of the Christian life, because it is implied that without it we are either not “real” Christians, or we jeopardize our eternal welfare. But we do not need to prove to God that we have faith. He knows it better than we do; after all He is the One Who gave it to us.
Although we look forward to the fulfillment of everything our Lord has prepared for us, He has given us enough in this life, so that we should “rejoice with an exceedingly great joy,” as one who has not only found, but has been given, without payment, the pearl of great price. He paid the price so that He could give it to us for free.
As John writes, 1 John 3: 2, “Beloved, we are God's children now,’ and St. Paul writes, Colossians 1: 13, “He has delivered us from the domain of darkness and transferred us to the kingdom of his beloved Son, 14 in whom we have redemption, the forgiveness of sins.” I am particularly struck by what our Lord said to His disciples about joy in His final conversation with them before He began His path of sacrificial suffering. But even more striking than that is that verse from Hebrews 12:2, “…Who for the sake of the joy that was set before Him endured the cross, disregarding its shame …” If He can find joy in the agony, the cruelty, the horror of Good Friday, once He said, “It is finished”, we too may rejoice, because it was “for us and our salvation.”
Let your people have the joy our Lord wants them to have, and has given us all by the Holy Spirit. They should not be encouraged to abandon this joy for seasons like Lent and Advent. The most despicable tradition of the Christian Church is the prohibition against singing “Hallelujah” during Lent. Our Lord said, John 16:22, “…and your hearts will rejoice, and no one will take your joy from you.” He said that on Maundy Thursday.
Then they will fill our churches as those of whom the Psalmist writes, Psalm 122:1, “I was glad when they said unto me, Let us go into the house of the Lord.” It is not the traditional liturgy and not praise bands that will bring them, but the joy of being able to assert that “we are the people of His pasture, and the sheep of His hand.”
This joy and the peace of knowing that we are indeed children of God even now is what I wish you and yours as we celebrate the Incarnation of the Lamb of God who took away the sin of the world.
George A. Marquart